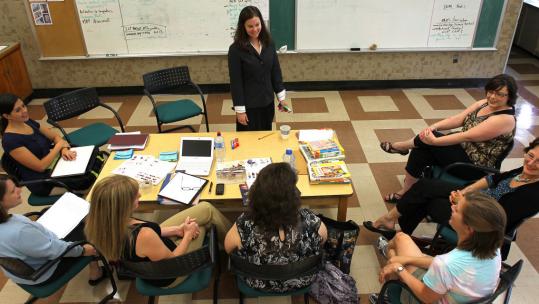 For years, Courtney Dickinson of Winchester felt the needs of her gifted son, now 8, were not being met in school. She worked with the local public schools to launch a gifted education effort and, she said, “We made progress.’’

But in the end, she decided, it wasn’t enough.

So Dickinson has started Anova: The Massachusetts School of Science, Creativity and Leadership, opening in the former Beebe School in Melrose Sept. 8. The private, nonprofit, parent-cooperative school is exclusively for gifted students.

“High-ability kids are bored, not challenged, and not excited’’ in traditional school programs, said Dickinson. “It’s a dramatically underserved population in our country. We have an unbelievable resource of talent, and we hold them back because we have age expectations and curriculum norms. These are the minds we should be investing in.’’

At Anova, which is opening with 37 children ages 5 to 11 from 12 communities, accelerated students are given learning opportunities according to their abilities, not age.

“If you are 8 and ready for pre-algebra, you should be studying pre-algebra,’’ Dickinson said.

Each student has an individualized learning plan. Classes are small, about 13 students each, and there are flexible multiage groupings based on ability in subjects such as math and reading. Teaching is interdisciplinary, which means connections are made between subjects. Each student is expected to complete a mentor-led independent project during the year.

“Our culture is not about pressure; it is about freedom,’’ according to the school’s website. “We encourage students’ innate curiosity and love of learning.’’

A graduate of Dartmouth College, a former teacher and business consultant in leadership development, Dickinson is serving as the school’s director for a $1 salary. She has hired four full-time teachers.

“The first step was making a commitment and telling everyone about it. That was the end of last August,’’ said Dickinson. “People would say, ‘I want to help you.’ It’s gotten off the ground with the volunteer effort of a lot of people. We created something out of nothing in a year.’’

She began by holding information sessions, which resulted in more than 300 families submitting letters of interest. Applications were due in February and the $10,000-a-year tuition was due in March.

“All the money for the school is coming from tuition,’’ Dickinson said.

She found the perfect spot at the Beebe School, which had been vacant a year. Anova occupies the first floor, which includes three classrooms, a fourth room used as a science lab, and a large open room used as a cafeteria and auditorium.

The school leased the building for $25,000 and pledged to provide 25 hours of free professional development services to teachers in the Melrose public schools.

Many parents and professionals have been tidying up, waxing floors, and painting to ready the school, and cleaning up and landscaping the grounds.

“They signed up for a school that didn’t exist and have been putting in their money and time,’’ Dickinson said. “It’s a reflection of how big the gap is in what their kids need and what they have been getting.’’

Ryan Plosker, a psychologist, educator, and school administrator who is not involved with Anova, said there is a nationwide trend to individualize education for students.

“We need to do school differently,’’ he said. “We have a diverse group of learners. People are all going to find their niche, and there will be kids in that niche.’’

Plosker, founder and executive director of the New England Academy in Beverly, said most public high schools have good academic offerings for high-ability kids, such as advanced placement courses.

In addition, the size of public schools allows for more diverse offerings.

But, he said, gifted students “have such individualized profiles and learning needs that they may need a different approach or curriculum.’’

Plosker also said a school of exclusively gifted kids would not isolate them further.

“In public school, it may be hard to find two other kids interested in video design,’’ he said. “In a smaller environment, they can connect easier with peers with similar interests.’’

While high-achieving or gifted is hard to define, the Anova application sets up some categories: Students who have a high ability in key subject areas and perform well on standardized tests; creatively gifted students who excel in music, art, or creative thinking; profoundly accelerated students who show high abilities at an early age; and twice-exceptional students, who are high-ability students who also have a disability such as dyslexia, anxiety, or attention deficit disorder.

The school suggested that applicants take the School and College Ability Test and have a neuropsychological evaluation.

Dickinson said students have already had several gatherings where “there was excitement and relief to finally feel at home with the other kids.’’

Wanda Luettgen, a Winchester mother of four, said she got involved after Dickinson, who is a friend, told her she was starting a school. “At first, I was taken aback. But Courtney is determined and such a visionary,’’ she said. “I was so impressed with the brainpower behind everything going on in the school.’’

She enrolled her 10-year-old in Anova. “The more I got to know, I felt intuitively this is a great school,’’ Luettgen said. “I felt Anova would allow him to go as far as he is capable of going.’’

In the future, Dickinson hopes to expand the school through 12th grade and wants to set up Anova satellites within the public schools as a learning lab and a model.

“It’s a way to crack the nut of education reform in Massachusetts,’’ she said. “It’s thrilling.’’