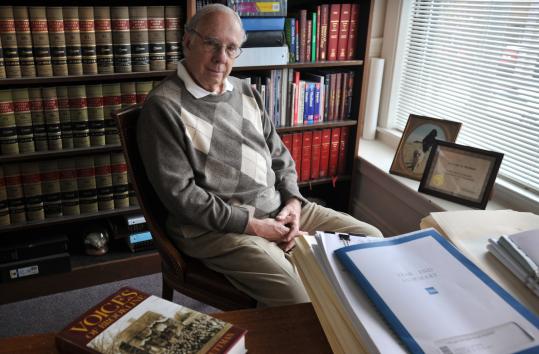 “We lived and we ate baseball,’’ author Larry Ruttman, sitting in his Brookline office, recalls of his childhood growing up in the town. (Josh Reynolds for The Boston Globe)
By Brock Parker Globe Correspondent / April 11, 2010

In his small, second-floor law office overlooking a handful of mom-and-pop shops at Cypress and Washington streets in Brookline, Larry Ruttman is leaning back in his chair and thinking about baseball.

He’s thinking about the arc of the home run he saw Ted Williams hit on June 9, 1946, when the ball soared deep into the right-field stands, and traveled through the straw hat of a man seated 502 feet from home plate. He’s remembering the days when he and his friends used to get in free at the old home of the Boston Braves on Commonwealth Avenue.

But the real nostalgic look creeps into his eyes, and a smile comes to Ruttman’s face, when his thoughts turn to playing the game with his childhood friends in Brookline.

“We lived and we ate baseball,’’ he said. “We used to go up to Devotion School and play stick ball when we were 10 or 11, you know, draw a box on the wall and play with tennis balls and a bat? My mother would be looking for me at 7 o’clock, and I’d come home with dirt and dust. We played for hours, hours.’’

Decades after his schoolyard games, Ruttman, 79, is in the final stages of writing a book called “Jewish Voices in American Baseball.’’

Ruttman says the book, his second, will relay interviews he has conducted with more than 40 of baseball’s most influential Jewish men and women, from Major League Baseball’s commissioner, Bud Selig, to first baseman Kevin Youkilis.

“Jews have been very attracted to baseball,’’ said Ruttman, who has been a lawyer for 50 years.

“It’s been a great way in earlier times — back in the early part of the 20th century, when Jews really came into the country in large numbers — to assimilate into the country. They like games, baseball especially, because not only to play the game is a lot of fun, but it’s very cerebral, I mean people are always thinking about statistics in baseball, they are always thinking about the unusual plays that never happened before.’’

Martin Abramowitz, who is president of Jewish Major Leaguers, a Boston-based nonprofit organization that seeks to document American Jews in baseball and produces baseball cards for Jewish players, is writing the forward for Ruttman’s book.

He said there have been other books in the last decade that have tackled the topic, such as “Jews and Baseball’’ by Burton A. and Benita W. Boxerman in 2006, and “The Big Book of Jewish Baseball’’ by Peter S. and Joachim Horvitz in 2001.

“Larry’s book is sort of like a culmination of a decade of renewed interest in Jews in baseball,’’ said Abramowitz.

He said the way Ruttman has created an oral history through the dialogue of his interviews is unique.

“It captivates the fascination in baseball and the meaning of baseball to a whole bunch of people,’’ Abramowitz said.

Jewish participation in professional baseball is at an all-time high, according to Abramowitz. There have been 14 Jewish players in each of the last few seasons, and more in the past 10 years than in any other decade, he said.

And, he said, said the Jewish influence continues off the field as well, with Selig’s role as commissioner, and others involved with unions and the National Baseball Hall of Fame.

Ruttman said he began his book project in Israel, where he traveled in 2007 to interview players in a new baseball league.

Since then, he said, he has interviewed fellow Brookline native and Red Sox general manager Theo Epstein, the president of the organization, Randy Levine, and Al Rosen, the unanimous American League MVP in 1953 as a Cleveland Indian.

He interviewed Marvin Miller, the former head of the Major League Baseball Players Association, who helped usher in free agency, and spoke with former major league umpire Al Clark, who went to jail on fraud charges for selling autographed baseballs that he said had been used in real games.

Ruttman said he also interviewed the family of the late Hank Greenberg, a Hall of Fame outfielder who is considered alongside Hall of Fame pitcher Sandy Koufax as the greatest Jewish baseball player of all time. Koufax declined an interview for the book, Ruttman said.

But Ruttman hasn’t overlooked more obscure Jewish influences on the sport either. His book will feature conversations with US Representative Barney Frank of Newton, and Jeffrey Maier, who at age 12 in 1996 deflected a fly ball hit by Yankees shortstop Derek Jeter into the stands for what was ruled a game-tying home run.

Thelma Eisen, who played in the professional women’s league in the 1940s and early 1950s that served as the basis for the movie “A League of Their Own,’’ recounted her experiences to Ruttman.

Eisen, 87, said that when she was growing up in Los Angeles her parents paid little attention to her interest in sports. She began playing softball near what is now Dodger Stadium, and was recruited to play baseball in the women’s league, where she stole 128 bases one year.

Eisen said when she sent newspaper clippings back to her family about her baseball career, her father didn’t understand what she was doing.

“He didn’t know anything about baseball,’’ she said.

Ruttman said he has asked those involved with the game about the challenges they may have encountered.

“Some faced more anti-Semitism than others,’’ he said. “Al Rosen, who was a great player, faced a lot and had to use his fists to protect himself, and so did Hank Greenberg. But you know, overt anti-Semitism has declined in this country over the last several years, and a lot of them haven’t faced that very much, and they’ll tend to dismiss it when they do face it as clubhouse kidding.’’

Rosen, who spoke to Ruttman in his California home and said he was impressed with Ruttman’s baseball knowledge, said he doesn’t believe today’s players face the same level of anti-Semitism that he did. He says one big reason there are more Jews playing today is that there are more major league teams than there were 60 years ago, when he played for Cleveland.

Ruttman, who in 2005 wrote his first book “Voices of Brookline,’’ said he is working on the final quarter of his baseball manuscript, and is close to signing with a publisher, with hopes of having it published next year.

But Ruttman said he’s already been rewarded by the research and conversations that have gone into the effort.

“If no book ever came out of it, it would still have been a great experience,’’ Ruttman said. “It hasn’t been work at all.’’

Brock Parker can be reached at Brock.globe@gmail.com.