A stretch of 800 acres, from the Charles River in Needham to Wellesley's Longmeadow Road and the crest that gives Needham's Ridge Hill Reservation its name, contains a lost civilization. Mostly buried now in the backyards of suburban villas, it was a fantastical folly created by William Emerson Baker, a 19th-century eccentric as rich and willful as any Roman emperor. 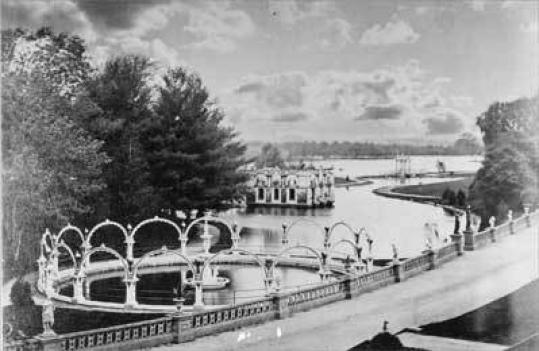 Not long ago, on an early spring morning, I was observing the habits of Marmota monax, the common groundhog or woodchuck, busily digging a burrow in a nearby field. Something shining caught my eye.

The groundhog quickly vanished, but there in the loose dirt was a brass door fixture about the size of a half dollar. Next to it was a small bottle, which my animal archeologist had also uncovered. The glass was as weathered and discolored as if it were an Etruscan relic dug from an Umbrian hillside.

Some denizens of Needham or Wellesley living where the two towns meet would know immediately what the groundhog had discovered. For these 800 acres, stretching from the Charles River in Needham to Wellesley’s Longmeadow Road and to the crest that gives Needham’s Ridge Hill Reservation its name, contain a lost civilization.

Mostly buried now in the backyards of suburban villas, it was a wondrous and fantastical folly built by a man rich beyond the dreams of avarice. His name was William Emerson Baker, and he was as eccentric and willful as any Roman emperor.

I grew up with Baker stories, but the mother lode of information lies in the Needham and Wellesley historical societies where old letters, pictures, and crumbling newspaper clippings abide. The most complete account is Leslie Crumbaker’s “The Baker Estate, or Ridge Hill Farms of Needham,’’ published in 1975.

There is not much left to see of Baker’s domain today. Some classic columns lie on the ground along Wellesley’s Sabrina Farms Road, looking as forlorn as Carthage after the onslaughts of Rome. Once there was a statue of Mercury atop these columns. All that is left of it now is a hand and a foot on display at the Needham Historical Society, resembling a Greek bronze plucked from the depths of a Sicilian sea.

Next to the columns is a round stone tower, 30 feet high, that used to let light into underground grottos filled with artificial stalagmites and grotesqueries designed to scare and delight.

Across Grove Street once stood the Norino Tower, seven stories and 100 feet high, filled with curiosities designed to educate and amuse. Norino is a careless transliteration of the Greek word to acquire knowledge.

Where Charles River Street crosses Grove in Needham there was a 90-foot water tower, topped by an 11-foot statue of Neptune, that provided water pressure for a series of fountains and jets.

There were monkey cages, bear pits, buffaloes, and a “Sanitary Piggery’’ in which pigs slept in linen sheets. There were stables with animated stuffed horses that could nod their heads. There were elaborate mechanical jokes. You would be invited to drink at a fountain labeled “Laughing Water,’’ only to find the floor tilting to simulate drunkenness as you walked out. There were gardens, and shaded paths, and boats.

In the Needham field where my groundhog was conducting his archeological dig stood the towering Hotel Wellesley, with more than 200 rooms. There was a branch railway, leading from Charles River Village near Needham’s Oxbow Road, that brought visitors to the hotel.

Like many of Baker’s buildings and monuments, the hotel was secondhand. It came from the Philadelphia Centennial Exhibition of 1876, where Baker bought the structure, and had it dismantled and shipped to Needham. The classic columns came from a Boston post office damaged in the fire of 1872.

There were boat houses and steam launches, and a small train station, the ruins of which can be seen off Charles River Street on the west side of Forbes Pond.

That pond, and Sabrina Lake, which straddles the Needham-Wellesley border, look as natural today as if they were carved by a glacier. But both are artificial, and would return to swamp were it not for carefully constructed levies.

Along with William Grover, the creator of all this founded the Grover & Baker Sewing Machine Co., rivals of the more famous Isaac Singer. Enormously successful in his day, Baker was able to sell his machines even to Napoleon III to make uniforms for the French Army, as well as to the Dutch, British, and Russians.

Baker retired at 40 in 1868 and bought up 11 farms on which to build his grand design, the Disneyland of Boston’s western suburbs. It was open to the public for a small fee.

It was his parties, however, that were the stuff of legend, putting the Great Gatsby in the shade. Almost anything would do for an excuse — a funeral for his favorite bear, Billy Bruin; the death of his pet swan, Leander; the laying of a piggery cornerstone; the naming of a prized heifer. To these fetes he would invite hundreds. The governors of Massachusetts and Rhode Island would show up. There is a polite regret from Oliver Wendell Holmes declining an invitation to Billy Bruin’s funeral.

In a gesture of reconciliation after the Civil War, Baker invited Southern and Northern regiments to encampments, and when they left after some weeks, he gathered the empty bottles and formed them into a tower with a banner that read: “To the Departed Spirits.’’

He had his serious side. He tried to promote the purity of food and the proper feeding and care of animals, which was visionary when you consider this age of salmonella and mad cow disease. His school of cookery became the Fanny Farmer school.

His dream was to split away from Needham and form his own town, to be called Hygeria, in which his scientific work on hygienic food production and public health would provide employment. He petitioned the Needham town fathers and the Legislature but to no avail, evoking much bitterness. Baker’s effort preceded and then coincided with a successful secession movement, the breakaway of Wellesley from Needham in 1881.

The name Wellesley comes from the estate of Horatio Hollis Hunnewell, the great benefactor of his town, whose Welles ancestors came to America in the 17th century. Some speculate that Baker listed his address and named his hotel Wellesley, although both stood in Needham, because he was angry at Needham. But he named both before there was a separate town.

Indeed, Baker complained that the proposed division would leave his bears, cats, prairie dogs, parrots, and all his monkeys in Needham, and his buffalos, bears, and peacocks in Wellesley. He petitioned the General Court to “compel the contestants’’ to devote themselves to their home and leave his animals to him.

Baker died in debt in 1888 at age 59. His land was sold, divided, and redivided over the years. The largest remaining open tract is Needham’s Ridge Hill Reservation, which took its name from Baker’s estate, Ridge Hill Farms. His house still stands on the east side of Grove Street, but is crowded by its neighbors, and what was once its formal garden is now the very large lawn of a more imposing house next door.

The grottos eventually collapsed, the Hotel Wellesley burned in a spectacular fire in 1891, the railroad tracks were torn up, and his large buildings were demolished during the 1920s and ’30s. The glory, vulgarity, and beauty, too, that was once Baker’s grand design is now but another lost ruin.