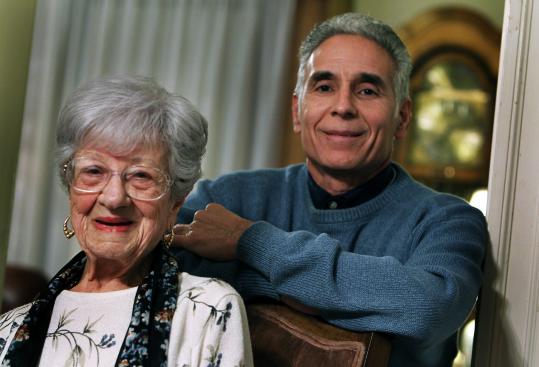 It was demolished more than 40 years ago, but Watertown’s Hood Rubber Co. never really disappeared from Areka Der Kazarian’s memories. At 98, she still smiles when someone mentions the once-bustling factory that gave her a job not long after she fled her native Armenia.

“At 16, I went to work at Hood because there were no jobs for my brother, and I could make $18 to $20 a week,’’ says the former conveyor-belt operator. “It was important to have that money because we had to eat.

Areka Der Kazarian was not the only one.

A newly released documentary, “Destination Watertown: The Armenians of Hood Rubber,’’ is introducing local audiences to the “Little Armenia’’ that formed within the now-defunct sneaker and tire manufacturer during the first half of the 20th century.

“Really, in some ways Hood Rubber was a sweat shop, and they worked under very trying conditions,’’ said Roger K. Hagopian, an amateur filmmaker who produced and directed the 68-minute documentary. “But good or bad, it was the foundation of their community. When they remember Hood, they remember their parents, their grandparents, their families who worked there.’’

A self-employed businessman who calls Lexington home, Hagopian, 60, is long removed from the grueling factory work that allowed his grandmother to flourish in her adopted country.

But Hagopian is never far from his history.

Over the last 14 years, he has produced four other films that explore Armenian experience: “Memories of Marash,’’ “Journey of an Armenian Family,’’ “Our Boys,’’ and “Memory Fragments of the Armenian Genocide.’’

“Destination Watertown,’’ which Hagopian completed last year and debuted at the Watertown Free Public Library in December, is replete with charming black-and-white photographs and trembling news reels from the 1920s and ’30s. It also gives a brief history of the Armenian migration that contributed to the plant’s success. Narrator Robert Mirak, board president of the Armenian Cultural Foundation, gently introduces viewers to the gruesome backdrop — genocide — that prompted thousands of Armenians to move to Watertown around the time of World War I.

But it is Hagopian’s decision to give most of the air time to the former employees and neighbors of Hood Rubber that brings “Destination Watertown’’ alive. Often salty, at times gauzy, their reminiscences lend an unmistakable grace to Watertown history.

Mooza’s observation is not too much of a stretch. Founded by Frederic and Arthur Hood in 1896, the Hood Rubber Co. was a major local employer for nearly 75 years, using as many as 10,000 laborers in its heyday. The multiacre complex in East Watertown included a fully automated factory, a research lab (believed to be the first of its kind in the country), and the Abraham Lincoln House, where workers could get medical services and tutoring in English. For the struggling immigrants who flocked to its gates each day, the most important thing it offered was a steady paycheck.

“Word spread as far away as the Ottoman Empire that there was work to be found at a place called the Hood Rubber Company,’’ Mirak reminds us. “By the end of the 1920s, approximately 3,500 Armenians, or 10 percent of the population, were living in Watertown, and more than 500 were working at Hood Rubber.’’

The working conditions that prevailed in many turn-of-the-century factories would shock modern sensibilities. Hood Rubber was no different.

“I think if OSHA had known what went on, they’d have objected,’’ said Mark Der Mugrditchian, a former worker.

Areka Der Kazarian calmly recalls getting her right hand caught in the conveyor belt, causing an injury that kept her out of work for a month. Her ring finger has been set at a 45-degree angle ever since. The filmmaker’s own grandmother, Hranoush Hagopian, was run over by a cart, one of many that transported materials around the mammoth plant. There were no lawsuits. There were no complaints.

The air inside the plant was often infused with rubber dust, and its huge smokestack regularly spewed ominous black smoke into the air. Several former employees and neighbors interviewed by Hagopian said they suspect this contributed to the cancer that they or their relatives later developed.

“The smell of burning rubber was like waking up and smelling the leaves,’’ says Mooza. “If the wind was right . . . you could get the stockyards in Brighton and the fires from the junkyards in Watertown.’’

Long before there were focus groups or market surveys, Hood Rubber recruited dozens of local kids to test its sneakers, including the popular PF Flyer. These weekly distributions were more frenzied lotteries than sober consumer research, but no one seemed to notice.

“The wearability of those sneakers was based on the activities of Watertown kids,’’ says Leon Janikian, a former Dexter Avenue resident.

“We used to ride our bikes and drag our feet so we’d get a new pair,’’ Der Mugrditchian admits.

More than anything, the “sneaker tests’’ divided the neighborhood into two groups: the ones who got a pair, and the ones who didn’t. Decades later, many of Hagopian’s subjects were still keenly aware of which group they fell into.

“I’d wait until they opened. . . If they had your size, you’d get the shoe,’’ says Katherine Kaloyanides. “I had small feet so it was almost an impossibility for me to get a pair. I don’t think I ever got sneakers.’’

“I used to wait two to three hours to get a pair, but I was a good test girl,’’ she says. “My mother had me running around all day.’’

Bob Sanasarian was not so blessed.

“My mother thought it was a good thing that I never got any sneakers. She thought that I should only be wearing leather shoes.’’

Roger Hagopian’s documentaries can been seen at the Armenian Library and Museum of America, 65 Main St., and purchased on DVD by contacting him at rogerhagop@aol.com.