THIS STORY HAS BEEN FORMATTED FOR EASY PRINTING
BROCKTON 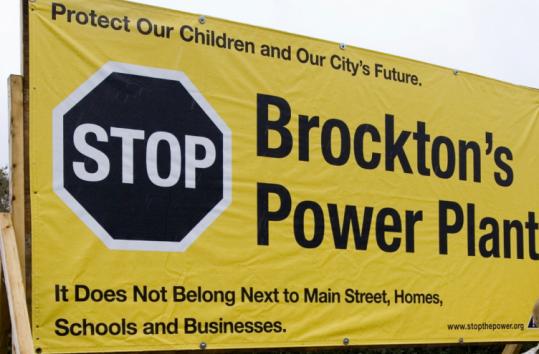 Opposition to a power plant in Brockton is strongest among people who live or work near the proposed location. (Rose Lincoln for The Boston Globe/File 2007)
By Michele Morgan Bolton Globe Correspondent / February 18, 2010

Brockton officials’ multipronged fight against a proposed 350-megawatt power plant has reached the State House, where their arguments received some timely support from recent events.

The Legislature last Tuesday began hearings on a home-rule petition filed by state Representative Michael Brady, a Brockton Democrat and former city councilor. The bill would essentially ban fossil-fuel electric power plants in Brockton because such facilities could not be located within a mile of a school, church, playground, day-care center, or place of critical environmental concern.

Brockton Mayor Linda Balzotti was among scores of power plant opponents who trekked to Beacon Hill to pack a hearing before the state Joint Committee on Municipalities and Regional Government.

“All we are asking is for the city of Brockton to be able to control its own destiny,’’ Balzotti said in an interview af terward. “I think the legislators were very receptive to what we had to say.’’

“My concern has always been about emergency plans and the ability for quick access,’’ Balzotti said about the Brockton proposal. “We have residents 800 to 1,000 feet from that plant. If [an explosion] happened here, you wouldn’t be talking about loss of life at the plant, but in those homes.’’

The Brockton proposal calls for a $350 million natural gas and diesel facility on an industrial site off Oak Hill Way. It would be built by Brockton Clean Energy, a joint venture of Advanced Power AG and Siemens Financial Services Inc.

Opponents have raised concerns that a fossil fuel-burning facility could harm the health of nearby residents. Supporters have stressed the revenues the plant would yield for the beleaguered city, as well as employment possibilities and taxes and fees.

One major supporter is Bill DeMello, president of the Brockton Building Trades, which represents 17 regional unions. He has stressed the importance of bringing the plant to an area where unemployment is as high as 35 percent at some trade unions.

A resolution on Brockton Clean Energy’s proposal appears to be a long way off as the controversy plays out in several venues.

The city is already appealing the state Energy Facilities Siting Board’s decision last summer to grant a construction permit to the Brockton plant.

An appeal also is about to be filed in Plymouth County Superior Court in response to a ruling last week from the state Department of Environmental Protection that said Brockton’s Conservation Commission erred in rejecting the project in 2008.

“It’s disappointing that the city has continued to spend taxpayer dollars on these appeals when we could be negotiating a revenue agreement that would return millions to the city,’’ said Advanced Power spokesman Wes Eberle. “That’s also 750 new salaries that would be spent at local businesses.’’

In a related controversy, the City Council last month tabled Advanced Power’s request to buy treated waste water to cool the proposed power plant’s towers, a move that would have brought an estimated $500,000 annually into city coffers.

Company officials now say they have no choice but to go back to the Energy Facilities Siting Board to register a change of plans, then submit an application to Brockton to purchase potable water. That not only costs more, Eberle said, it wastes valued resources.

Any business has the right to buy water, he said. And company officials will have to examine their options should Brockton reject a new request.

Balzotti, though, said her resolve is firm.

“We’ll just continue to do what we have to do,’’ she said. “I’m not going to fold under legal pressure.’’

Balzotti now has the support of all city councilors. Councilman Todd Petti had been the plant’s lone supporter, but switched sides after the Connecticut accident.

Eberle said officials have taken concerns about the Connecticut explosion to heart, and pledged not to begin construction until they know what happened in Middletown, Conn., and how such an accident could be prevented in Brockton.

“We would ask that legislators, city councilors, plant neighbors, and the mayor give us the opportunity to do this fact finding, to determine how best to build a plant with the absolute minimum chance of accident, and to bring those findings to all of you,’’ a company statement said.

State lawmakers have given no timeline for a vote on the Brockton home-rule request. In the meantime, a regional task force of surrounding towns that oppose the power plant is crafting legislation that would put a moratorium on all new fossil-fuel plants within a 10-mile radius of a state-designated environmental justice area, namely that neighborhood of Brockton. The policy is meant to protect poor communities from overexposure to polluting industries.

The moratorium bill would run concurrently with the Brockton home-rule legislation, said West Bridgewater Selectman Matthew Albanese, who chairs the regional committee and is a candidate for state representative in the district that includes Brockton, Easton, and West Bridgewater.

He is challenging fellow Democrat Christine E. Canavan, who is seeking reelection and who testified in Boston last Tuesday as an ardent power plant opponent.

“We felt it would be good to have a complementary bill for the whole Commonwealth,’’ Albanese said.

Michele M. Bolton can be reached at mmbolton1@verizon.net