Though home with children today, more college-educated women are planning to relaunch careers, this time with a new perspective 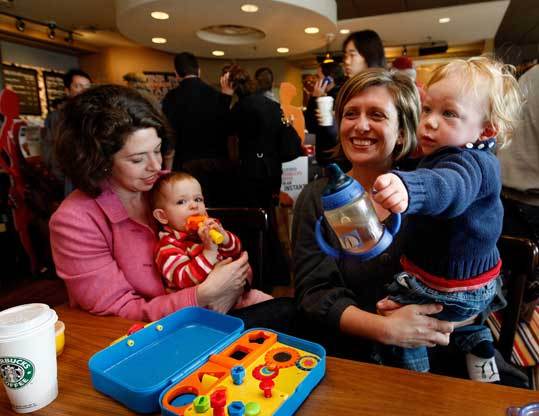 (Barry Chin/Globe Staff) Liz Brown, 39, of Dedham (near left, with daughter, Rachel Adler, 13 months, at a Needham Starbucks) left her first career as an attorney, but would like to return to work in something that combines her passions for causes such as childrenâ€™s issues with previously underused people and creative skills. Phoebe Peabody, 37, of Needham (right, with son, Asher Shillin, 13 months) worked at a private wealth management company. She's hoping to combine interests in cutting-edge technological and social trends with her traditional business background.
By Erica Noonan Globe Staff / October 22, 2009

Phoebe Peabody thrills to the sound of 13-month-old Asher babbling his first words, “juice’’ and “mama.’’ Her friend, Liz Brown, blooms with joy every time her daughter, Rachel, who is three days older, wobbles to a standing position.

A little more than a year ago, Brown, 39, was a partner in a downtown Boston law firm, and Peabody, 37, of Needham, was using her MBA from Wake Forest University working in the compliance and fiduciary group of a private wealth-management company.

Right now, home with their babies is exactly where these successful professional women want to be. But even though their children are still in infancy, they know sooner or later they will be back in the workforce.

They are among a fast-growing group of women intent on “relaunching’’ their professional careers after staying home with children.

US Census Bureau statistics from 2000 show that there were nearly 2 million unemployed women between the ages of 23 and 54 who said they had both a bachelor’s degree and children, and indicated an interest in returning to work. And it appears the demographic has grown over the past decade. Recently released US Bureau of Labor statistics from 2007 to this year found an uptick among college-educated women living with a spouse who were looking for work, while the number of men in the same situation who were looking for work dropped slightly.

Newton resident Carol Fishman Cohen, a career consultant and coauthor of a 2007 book, “Back on the Career Track: A Guide for Stay-At-Home Moms Who Want To Return To Work,’’ likened the trend to an explosion, as the number of large corporations offering reentry and flex-time programs for returning parents jumped from nine in 2004 to more than 62 at last count.

“We’re seeing that lot of the stigma’’ of staying at home “is gone, and that relaunchers are even turning around and hiring other relaunchers,’’ said Cohen, a Harvard Business School graduate and mother of four. “Employers are seeing successful reentries and are getting more comfortable with the idea and the risk.’’

Cohen left a career in finance for more than five years to raise children, and found it difficult to find a job with a satisfactory work-life balance when she returned in 2001.

Several local schools, including Babson College, Wellesley College, and Brandeis University, are responding with specialized career counseling programs for their alumni, and more than 75 women have graduated from Bentley University’s More Opportunities for Mothers workshops, a four-part series run by the Waltham school’s Women’s Leadership Institute the last three years.

The current More Opportunities for Mothers session has enrolled two dozen women, including Brown and Peabody, who met in a natural childbirth class and became close friends in the first year of motherhood.

Peabody said she’s hoping to combine her interests in cutting-edge technological and social trends with her more traditional business background.

“It doesn’t matter to me where I work, but what I am doing when I am there,’’ she said. “My goal is to only take a job if it’s something I really want to do. Whatever it is I do, it will have to be more enjoyable than staying home with Asher.’’

Peabody and Brown, who lives in Dedham, are somewhat atypical for the More Opportunities for Mothers program in that they have not been out of the workforce for long. The more typical participant has two children and has been at home for more than a decade, said Marianne DelPo Kulow, director of the Women’s Leadership Institute. Some are considering a return to the workforce after a very long break, 17 years or more.

All are worried “about the B-word: balance,’’ Kulow said. Even though relaunchers often make for more stable, loyal, and enthusiastic employees, she said, there is still a serious confidence gap on the part of mothers who fear they can’t compete in the job market.

Participants must take a long, hard, realistic look at their resumes, personalities, skills and aspirations.

“This is not therapy,’’ Hyle told the group during the first meeting. “It’s Bentley. We are not holding hands, walking into the woods, singing ‘Kumbaya.’ ’’

That said, laughter, hugs, and tears are also par for the course, participants said.

A graduate of the program from Newton, Janice Copley spent eight years out of the workforce while raising her three children. She wanted to relaunch her previous career as a software consultant and trainer.

Last year she joined Softeach Inc. in Newton as a software training consultant and now works about 30 hours per week. Her boss, Elizabeth Brown, founded the company in 1984 while raising her family, and is well acquainted with the challenges of combining work and motherhood.

Copley said she is “very proud of staying home with my kids for eight years.

“My kids are still a priority,’’ she said, “and I am not afraid to communicate that. I don’t want to be in a work environment where I felt I couldn’t talk about my kids.’’

Bentley’s program helped her refine her job parameters - what she wanted and didn’t want, what she had to offer, and how to make the best possible impression on potential employers - even with a lengthy gap on her professional resume, she said.

Brown, who holds bachelor’s and law degrees from Harvard, said she isn’t sure when she’ll return to the workforce or what she would do. But she strongly doubts it will be as a lawyer in any traditional sense.

She said she considers herself incredibly fortunate to have the luxury to map out a second career, although she was the main breadwinner before Rachel was born, and her husband, a software engineer, is feeling pressure from being the family’s sole provider.

But an all-encompassing corporate career full of 12-hour days in the office, and “all night on the Blackberry,’’ isn’t what Brown said she wants anymore.

“We are learning that we can live pretty happily on less. A lot less,’’ she said.

The idea that women who have dropped out of the workforce to raise children are entitled to a professional future is an idea whose time has come, said Cohen, who notes that even a new television show, “The Good Wife,’’ features a relauncher.

“It’s time to challenge these traditional notions. Stepping aside for a time doesn’t mean you have lost your potential,’’ she said.