Jews measure their impact in Plymouth

Congregation Beth Jacob is set to mark 100 years in town 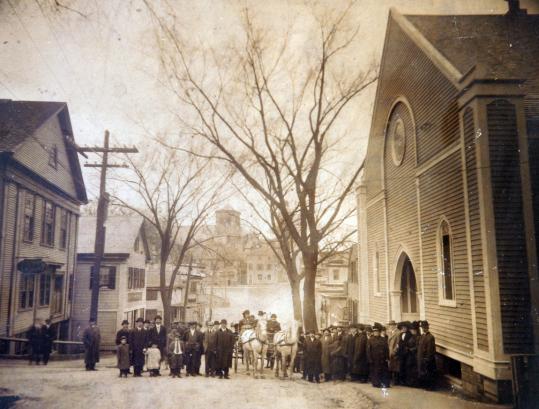 When people talk about Plymouth's history, the Pilgrims and Wampanoags immediately come to mind. But what about Jewish history?

That will be the focus of several events this weekend, when Congregation Beth Jacob celebrates its 100th anniversary and highlights the historical impact its members have made on America's Hometown.

The centennial observance kicks off tomorrow with a Kabbalat Shabbat service featuring the Rev. Peter Gomes as guest speaker. The festivities will continue with a Saturday morning Shabbat service, a dinner dance Saturday evening, a Sunday brunch at the Pinehills Golf Club, and a trolley tour of historic Jewish Plymouth on Sunday afternoon.

Descendants of the congregation's founding families will come from all over the country - including California, Maryland, New York, and Texas - to mark the historic milestone. "It should be a wonderful thing," said Finer.

"We're really celebrating our role as a congregation in the neighborhood," said Rabbi Lawrence M. Silverman. "We have a lot to celebrate here."

The Jewish community has been a presence in Plymouth since the 1880s. Over the years, they've opened businesses and built homes, stores, and offices, among other enterprises.

Congregation Beth Jacob, known among members simply as CBJ, built the first and only synagogue in Plymouth. The temple today serves not just Plymouth but also a dozen neighboring towns; other synagogues are 15 to 20 miles away. CBJ members drive in from Carver, Halifax, Hanson, Kingston, Middleborough, and Wareham.

The roots of the congregation can be traced to the 1880s, when Jewish immigrants settled in Plymouth in larger numbers and made their living as peddlers and shopkeepers. Some worked at factories, such as the Plymouth Cordage Co.

Congregation Beth Jacob was established in 1909, when 40 Jewish families formed the Beis Jacob Society. They began making plans to build a synagogue, recording their meeting minutes in Yiddish. At the time, daily and Sabbath prayers were held at home; on High Holy Days, the families would rent a hall.

By 1911, the society had voted to spend up to $4,000 to build a synagogue and secured a long-term mortgage and purchased land on Pleasant Street. The building was completed in 1913.

In the 1940s, Finer said, "when the men came home from World War II, they used their severance pay to pay off the mortgage."

In 1979, the congregation bought a second building - the former home of a Methodist church on the corner of Court and Brewster streets - to serve as a community center. The synagogue, at 8 Pleasant St., would continue to be used for worship services.

Today, 125 families belong to Congregation Beth Jacob, which is affiliated with the Union of Reform Judaism. Membership has held steady in recent years, said Finer.

To commemorate the congregation's history, Finer has asked past and present members, as well as members of the public, whether they have any memorabilia from Congregation Beth Jacob's 100-year history they'd like to share. Anyone with photos or documents of weddings, bar mitzvahs, bat mitzvahs, Hadassah, and B'nai B'rith meetings, or other historical items to contribute, is asked to contact the Congregation Beth Jacob office at 508-746-1575.

Several members of the congregation have been researching the history of the congregation, and they have identified dozens of places in Plymouth where Jews lived and worked - doctor's offices, stores, homes of the founding families, and buildings constructed by Jewish businessmen.

On Sunday, the congregation will host two trolley tours of Plymouth that will highlight these landmarks. The sold-out tour will be led by Karin Goldstein, who holds a doctorate in American studies from Boston University and serves as the curator of original collections at Plimoth Plantation. Goldstein lives in Plymouth and has been a member of Congregation Beth Jacob for almost 17 years.

"I spent several months going through street directories, vital records, and censuses to put together a picture of the community c1890-1935," Goldstein said in an-e-mail. "As I researched, I realized that many of the Jewish families lived on Summer and High streets."

Many Jewish families lived in that area from the early 1900s through the 1930s. Most homes were torn down during urban renewal efforts, but a handful remain. They include several buildings on Summer Street - 60, 68, and 70 Summer St. - that were once owned by Joseph Berg, one of the founding members of Beth Jacob, said Goldstein. Berg built several buildings in North Plymouth, and also helped build the synagogue.

The Harlow-Bishop House at 22 Summer St. also has a strong connection to Plymouth's Jewish community. The Kaplowitz family bought the house in 1915 and lived there until the 1960s, when it was slated to be demolished to make way for the Spring Hill Apartments. A politically connected resident helped save the house, and it was moved across the street, where it still stands, said Goldstein.

Another highlight of the tour will be the Sherman Building at 310 Court St. in North Plymouth. The name Sherman is engraved on the facade of the building, but "people might drive by it and have no idea what it means," said Finer. As it turns out, the building was built by Abram Sherman around 1928 as a furniture and hardware store, and it was the first building with an elevator in Plymouth.

The tour will also pay tribute to several notable Jewish residents, such as Dr. Earl Waterman, who started practicing medicine in Plymouth in the late 1920s and delivered hundreds of babies over the course of his 40-plus-year career. He had an office on Court Street.

The tour will also mention Sue Sadow, who went on to become the first senior citizen to join the Peace Corps in 1961. Her father ran a local clothing store, and it was the first business in town to have an electric sign.

"Some of the buildings are no longer there. Some buildings have become landmarks in town, and I don't think people in town realize the significance they have," said Finer.

The Beis Jacob Society is formed by a group of 40 Jewish families.

The society votes to spend up to $4,000 to build a synagogue.

Construction of the building at 8 Pleasant St. was completed.

Congregation Beth Jacob includes 125 families, 60 percent of whom live in Plymouth. Other families come from surrounding towns including Carver, Middleborough, and Wareham.