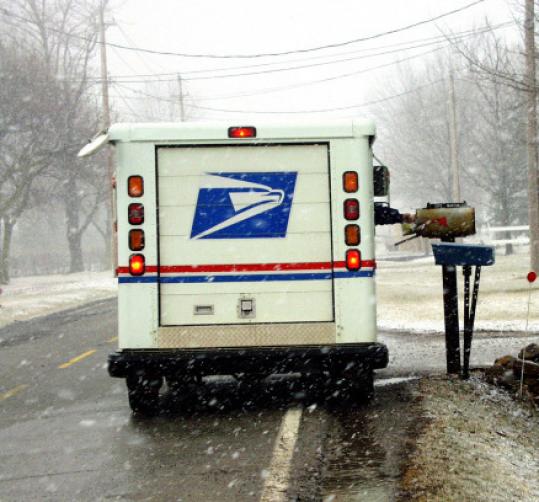 They show up. Every day, except Sundays and holidays.

Rain or shine, sleet or snow. Election Day. Groundhog Day. The first day of spring? Even one Christmas day, a few years ago. The doorbell rang and there was my letter carrier with a package marked "special delivery."

They don't toss it on the lawn if your mailbox is surrounded by ice. They don't cower in the face of a snowstorm and refuse to get out of their truck. They're not paralyzed by a northeaster. They don't stay home every time the wind changes and school is canceled. They go to work and deliver the mail.

Last Monday, there was a storm, and the state shut down for the zillionth time this winter and schools were closed tight once again, and after-school activities were canceled, and even next-day activities like field trips were put on hold in case the snow didn't stop.

The TV weather people theorized about this - how the storm might stall, how the snow might turn to ice near the South Shore or maybe near the Cape. Hard to call, they said. Then they explained (To whom exactly? Don't even small children know this?) about the physical properties of snow. That it's cold and wet and icy, shocker! And that this is how you should dress for it, "in layers." And that this is how you should walk in it - "like a penguin."

If dogs and cats fell from the sky, or even hail, this would be cause for instruction. Wear a hard hat! Stay inside!! But snow? Why are we suddenly riled by it? And immobilized? It's winter. It's New England. It snows. When did a snowstorm become a kind of lockdown?

By Monday morning, the snow in my town was just spitting. The storm was over. Flurries would follow, but for the moment the roads were clear. People hunkered down anyway.

The newspapers, mine and my neighbor's, were tossed onto snow banks, not onto the porch where the delivery person usually flings them, because he didn't get out of the car. He chucked them from inside. Snow, you know? Clearly, he didn't want it touching him.

And the sanitation workers apparently were given the day off because there was no trash pickup as scheduled. And everywhere, thousands of ordinary people were late getting to work because they could be. Can we reschedule that meeting? That interview? That appointment? Sure. Of course. I understand. It snowed!

In the meantime the mail trucks ran as usual.

My letter carrier hasn't missed a day all winter. She could have. There have been times my walk has been ice-covered, or not shoveled, or blocked by a mound of snow dumped by the street plow. There have been times, in the middle of a storm, when there has been no path at to my door at all. She's come anyway.

She brings mostly bills and fliers and even more bills these days. There are so few letters. E-mails have replaced them.

You would think I'd want her to take a snow day. But I don't. I love getting mail. Some days I hear the truck lurch into first gear as it leaves my neighbor's house and I watch as it pulls up in front of mine. Some days I'm not home when the mail comes.

But one thing is for certain. Rain or shine, sleet or snow, it always comes.