THIS STORY HAS BEEN FORMATTED FOR EASY PRINTING
Brookline

A place where every voice shall be exalted 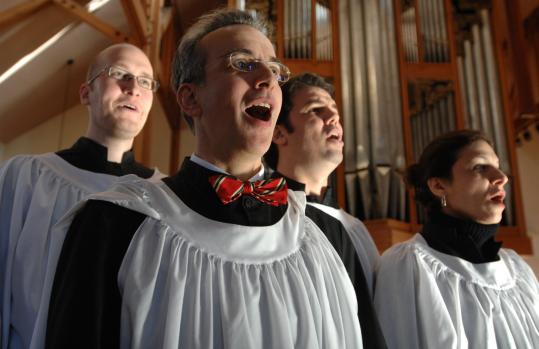 Calling all altos - and sopranos, tenors, and basses.

For 35 years, "Messiah" enthusiasts have flocked to St. Paul's Episcopal Church, at 15 St. Paul St. in Brookline, for Handel's beloved masterpiece, but not just to sit and listen. For this free annual "Messiah" sing, which counts off this afternoon at 4 p.m., the audience members are also the performers (though just listening is fine, too).

While "Messiah" sings are hardly new, the steadfast production at St. Paul's has survived 35 years of ups and downs, including several changes of music directors and a disastrous fire that destroyed the sanctuary. And still this homegrown Handel, as the organizers call it, is going strong, attracting singers not just from Brookline but all over Greater Boston - as well as one loyal participant who for years came in from the Berkshires.

"There are a lot of 'Messiah' sings, but this one is tremendously friendly and accessible, where everybody is having fun but it sounds good, too," says longtime parishioner Molly Lanzarotta. "It's really fun when you get a packed room of people singing all the parts. People go away for 10 or 20 years, and come back, and it is still here. This is the kind of event that makes Brookline special and gives it that community feel."

Brookline resident Walter Mucha has been taking part since the very beginning and remembers the event's genesis, after a couple of the church's choir members suggested hosting a "Messiah" sing.

"About a dozen of us got together in the church parlor around a piano, and we sang every part - the arias, the solos - we just blew through the whole thing," he recalls.

For several years, the sing continued informally, in part because in 1976 the church's sanctuary was devastated by fire. The sanctuary reopened in 1980, after renovations had retooled the interior in an open contemporary style with special attention paid to acoustics. The sanctuary has since become a sought-after concert and recording venue, hosting 60 to 80 concerts and recording projects each year.

Gradually, through word of mouth, the "Messiah" sing attracted more participants. "People started talking it up, and we put up signs in the neighborhood," Mucha says. "There've been as many as 15 or 20 orchestra parts at times. It's been like a vigorous plant that just keeps getting deeper roots. It's had as many as 250 to 300 people some years. There was literally standing room only many a time."

According to Lanzarotta, the event has recently experienced renewed energy, due in part to Andrew Clarkson, St. Paul's music director for the past three years. A graduate of Harvard College, Clarkson also has a doctorate in organizational behavior from Boston University, which Lanzarotta believes comes in especially handy when working with musicians and churches.

"Andy could inspire a rock to sing," she says. "Besides being a really talented musician, he's just a person of infectious enthusiasm and total encouragement for singers and musicians."

In addition to leading the annual sing, Clarkson has brought new musical events to Brookline, such as the "Procession of Carols," a combination of music and readings scheduled for Dec. 20. Clarkson first came to St. Paul's "Messiah" sing roughly 15 years ago, attending with one of his Boston University professors.

"It was great fun," he remembers. "I think if Handel were with us and able to peek in on different performances, he'd have the greatest glint in his eye for the 'Messiah' a la St. Paul.

"We don't get every note right, but we get the spirit of it. And when all is said and done, the goal is not perfection. The goal is to communicate something with the music about the magic and mysteries around us. When the instrument you play is your body and the sound is coming from within, and you put the magic of that soulful sound with other people, something special happens. It's about the 'we,' not the 'me.' "

Lanzarotta agrees, and this year, she is bringing her 80-year-old mother - from Los Angeles.

"I really believe in the power of music to bring people together," she says, "to break down that shyness that people might feel in a group, especially in a piece like Handel's 'Messiah' with these amazing harmonies.

"It has this universal spiritual power when you make something beautiful together."