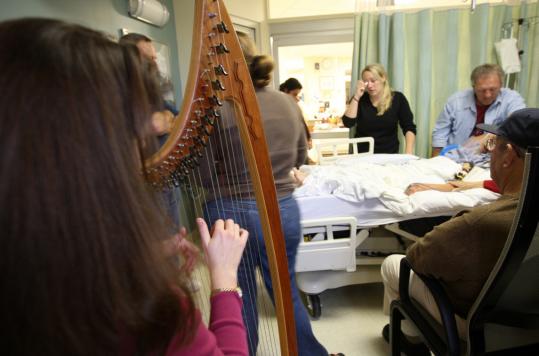 Jennifer Hollis, a music thanatologist, plays her harp while members of the Harmon family gather to say goodbye to Linda Harmon, who passed away later that day at the Lahey Clinic. (JOANNE RATHE/GLOBE STAFF)
By Kathleen Burge Globe Staff / November 9, 2008
Text size – +

BURLINGTON - In Bed 7 of Lahey Clinic's medical ICU, life has nearly left Linda Harmon. Repeated blasts of chemotherapy could not beat back lung cancer, and now, in her final hours, she lies on her back, her eyes closed in a morphine haze, her hands curled at one side.

She is 54, and her elderly parents sit beside her on slim hospital chairs, their hands folded as if they are waiting in church pews. Her granddaughter, too young to walk, gurgles from the foot of the bed. One of Harmon's daughters steps forward and strokes her still fingers.

As four generations of the family say their goodbyes, a woman they have just met sits in a corner, playing her harp. Over the past three years, Jennifer Hollis has been accompanist to hundreds of these intimate gatherings at Lahey Clinic. Hollis, 35, is trained as a music thanatologist and plays her harp and sings to dying patients and their loved ones.

Playing music for the dying is an ancient ritual that Hollis - the only practicing music thanatologist in a Massachusetts hospital, according to Lahey officials - and others are helping to revive. Music thanatologists point to studies suggesting that music can ease pain and breathing difficulties, as well as soothe agitated patients and help them sleep.

"It relaxes everybody," said Erin Casey, a nurse on Lahey's medical ICU. "The call buttons don't go off. I think it really takes them out of Lahey for a little while."

Thanatology addresses the needs of the dying. Hollis first heard about music thanatology as she was finishing her child development major at Connecticut College in the 1990s. She had grown up singing and playing music, and she knew she wanted a career serving others. After graduation, she moved to Missoula, Mont., to study.

Hollis finished the two-year program, and another year of certification, and then got her master's at Harvard Divinity School. After 18 months as a full-time music thanatologist at a Chicago hospice, Hollis moved back to the Boston area to be closer to her family in Attleboro. She took a job as an assistant director of admissions at Harvard Divinity School. And she approached the palliative care service at Lahey Clinic about playing for patients a few hours a week.

The hospital team had never heard of music thanatology. But they were impressed by Hollis and believed that her work could fit into their medical practice, said Dr. Elizabeth J. Collins, medical director of the hospital's palliative care service. As advanced medical technology often dominates the final days of life, both palliative care and music thanatology have similar goals for the dying: to care for patients' physical, emotional, and spiritual needs.

"Many times families will not expect to have the emotions that they have," said Collins, who encourages patients' relatives to stay in the room when Hollis plays. "They just start to weep. Or people will touch each other. Normally, in the hospital, with the bars up, it's not that easy to make that connection. There's something so healing about it."

People often ask Hollis, who looks like she might be headed to a chamber music recital as she pushes her harp down hospital corridors, how she can do such grim work.

"I do see a lot of suffering," Hollis said. "I see people who have to say goodbye to each other, who are coming to terms with what it means to leave this world, or this life that they've known. But what I also get to see is people being incredibly beautiful and loving and tender with each other, patients saying wonderful things to their families, families saying wonderful things to them. For me, it's a real education in what it means to be human."

Linda Harmon loved Celtic Woman, an Irish musical group, so her family was eager for Hollis to play beside her bed. A hour before Hollis arrived, Harmon's relatives had made the decision that doctors and nurses should only try to make her as comfortable as possible. Nearly two years, and many rounds of chemotherapy, after she was diagnosed with lung cancer, there was nothing more to do.

Family members had arrived from throughout New England and the world. One of her brothers stood at her shoulder and rubbed her scalp, itchy from the short hair that grew back after chemo. One of her daughters pulled the blanket down to cover her bare toes.

Over the sounds of the ventilator pushing out oxygen, Hollis played the harp.

The music seemed to ease out words and stories from Harmon's family. They remembered how she loved animals - and wasn't afraid of shooing away a skunk scratching at the door of her Alton, N.H., house in the middle of the night - and the Bruins. As a child, Harmon and one of her brothers used to skip school and beg for money to see the Bruins play. Several team members called and visited in her final weeks.

Her daughters remembered how she sewed them bee costumes and had them stand outside their grandparents' bakery - Mrs. B's Candies and Cakes - as advertisements. And they remembered how she loved to help people, from foreign exchange students to others with cancer.

After Hollis has finished playing, she bent close to Harmon.

"Linda, thank you for letting me here with you today and with your family," she said softly, then guided her harp past the hospital bed, around the curtain and out of the room.

Within an hour, Harmon let go. The goodbyes were done, and she was gone.