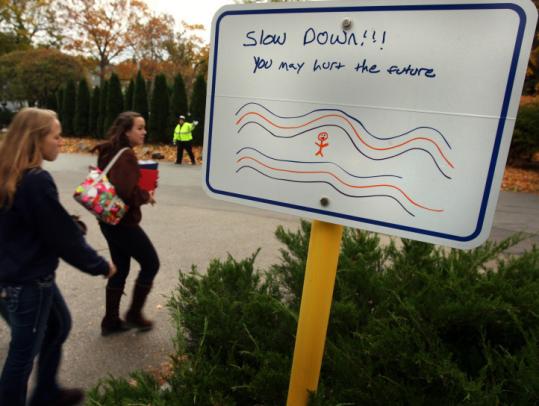 Needham officials have deployed nontraditional signs, including ones on Kingsbury Street (above) near the high school and Harris Avenue (inset) near the Pollard School, to coax drivers into obeying traffic laws. (Photos by Michele McDonald/Globe Staff)
By Lisa Kocian Globe Staff / November 6, 2008
Text size – +

Not in Needham. Drivers have feelings, too. And the harried soccer/hockey/gymnastics mom who is just trying to get everyone where they're going might actually respond better to a sign that tries to relate to her, according to Town Manager Kate Fitzpatrick.

Using that borrowed theory, Fitzpatrick enlisted Pollard Middle School students to design signs that would slow down their parents and older brothers and sisters.

"We have a lot of people complaining that people are driving too fast in their neighborhoods," she said. "The people who are doing this are us. These are not thieves in the night."

The signs, which just started to go up in recent months near schools, bear slogans like, "Where's the Fire? Slow Down!" Red and orange flames decorate that sign, which looks homemade but is actually professionally produced.

The idea is that seeing a child's handwriting and drawing will make parents relate to the sign in a way they never would with an impersonal version.

The traditional didactic signs simply aren't bringing the speeds down, said Fitzpatrick, so it's time to try something that might better address the town's number one complaint.

She said the novel approach came out of a conference she attended last year, when Daniel Pink, best-selling author of "A Whole New Mind," talked about using so-called right-brain skills like empathy to communicate more effectively - and ultimately to be more successful.

The overarching theme is that empathy and creativity are critical in the workplace, be it a company or a nonprofit organization or a local government.

Pink, in a phone interview, said he tailored his message on "emotionally intelligent" or "empathetic" signs for city managers attending his talk at an event last year hosted by the International City/County Management Association.

"Based on anecdotal evidence, I thought that these signs could be a lot more effective if they were more empathetic," he said, "if they demonstrated empathy with the people who were viewing them, and also if they encouraged empathy on the part of the people viewing them."

Pink, who lives in Washington D.C., came upon the idea by accident while visiting a New York museum with his wife and three young children. The family took a break from touring to get something to eat at the museum cafeteria.

"The line is just outrageously long," Pink recalled. "And I'm all stressed out about that because we don't have a lot of time, and I don't want to waste my time at this beautiful museum waiting for a grilled cheese sandwich."

Then he saw a sign that read, "Don't worry. This line moves really quickly."

Pink said he immediately felt much calmer and it made his entire experience at the museum better. So, he started looking for other examples.

Being empathetic helps leaders persuade people to follow them for the same reason that an empathetic sign coaxes better compliance, he said.

A reporter's call was the first he had heard about Needham following his advice, and he said he was "thrilled."

In the context of local government, empathetic signs are something that political leaders can do that improves civic life for little cost, said Pink.

This offbeat approach is not the way traffic calming usually works.

In Newton, the idea is to actually make drivers a little uneasy about going too fast.

"I think the goal of traffic calming is to make a driver uncomfortable without making them unsafe," said Clint Schuckel, Newton's traffic engineer. "We want to encourage people to slow down physically - such as a raised intersection or design a road to make it feel more narrow, less forgiving."

The least expensive way to slow drivers down, he said, is by allowing on-street parking, which narrows a road.

What doesn't work? Rumble strips, said Schuckel, because "they just made noise and annoyed people that lived nearby."

The digital signs that show driving speed can work temporarily but once people get used to them in any given area, they start ignoring them, he said. So, Newton uses mobile signs and moves them around frequently, he said.

With most of the 24 Newton aldermen telling him that traffic and parking are the top issues they hear about from constituents, however, Schuckel said he's interested in finding out how Needham's experiment works out.

The federal government is moving in the opposite direction with road signs - trying to make them more uniform for drivers in this country who are from all over the world, according to Doug Hecox, spokesman for the Federal Highway Administration.

Statistically, most accidents happen on smaller roads - residential roads or side streets - where drivers feel comfortable and can easily become complacent, he said. The federal agency promotes uniformity of signs and lane widths to create predictability and ease of understanding for drivers of all backgrounds and skill levels, according to Hecox.

That said, he had never heard of "emotionally intelligent" signs and thought the idea was intriguing.

"We're open to good ideas," said Hecox. "It's not a bad theory, but we're not willing to endorse it until there's proof."

In Needham, Fitzpatrick is excited about the new signs, and has already started expanding beyond traffic. Just last week she was with the police chief at Memorial Park, where a half-sized replica of the Vietnam Memorial was on display.

Police Chief Tom Leary was standing next to her and the two started talking about a sign that demanded: Keep off the monument.

Leary pointed out that the sign was not "emotionally intelligent," and he suggested an alternative. Fitzpatrick agreed and the sign has already been replaced. It now reads: "Respect their sacrifice. Please keep off monuments."

The traffic signs have been a hit so far, said Fitzpatrick. There have been many requests to get them in particular neighborhoods, and although there are only about half a dozen of the traffic signs up so far, more are in production.

"People think of government as a big bureaucracy, but in local government, it's putting up signs and trying to get people to drive more slowly - it couldn't be more basic," said Fitzpatrick. 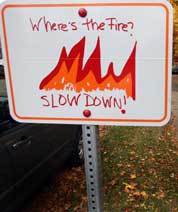