In Italy, Menino unveils vision of a global Boston 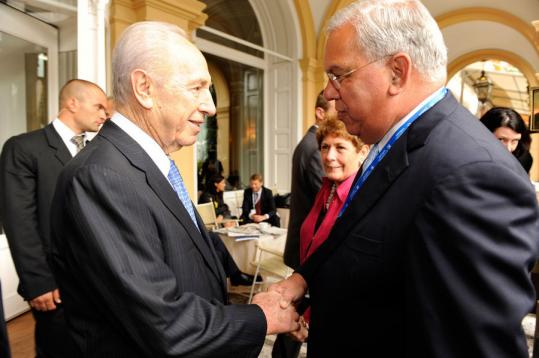 CERNOBBIO, Italy - On an expansive veranda overlooking Lake Como, Mayor Thomas M. Menino cut a determined path through dozens of executives and dignitaries chatting and sipping cappuccinos during an international conference this weekend at one of the world's most exclusive hotels.

Israel's president, Shimon Peres, was emerging from the lobby of the Italian resort with a phalanx of special guards when Menino approached.

"I met you at Brandeis," Menino said, thrusting his hand out in greeting much as he would at a restaurant opening in West Roxbury.

Networking is what Menino came to this five-star luxury resort nestled in the Italian Alps to do and to talk about, the only mayor of a US city in this gathering of money and power whose 300 attendees included Vice President Dick Cheney and Jose Maria Aznar, the former prime minister of Spain.

In his formal remarks yesterday, delivered to a packed conference room with vaulted ceilings and crystal chandeliers, Menino unveiled a plan to launch a Boston alumni network that links former residents from around the world and taps their creative energy to generate ideas to benefit the city.

He didn't say how the network would be created or what form it would take, but he said he hoped to use it to market the city as well.

"Every university in the world promotes itself through the personal relationships of the people who studied there," he said. "But to my knowledge, no city in the world has ever attempted to create the same kind of massive, information-sharing community on behalf of a city."

Menino, who was invited to speak at the conference by Tom Ridge, the former homeland security chief, said he believes that people are one of the most valuable assets in a globalized economy, and therefore in Boston, his administration has focused on educating its residents, creating beautiful and livable neighborhoods to retain them, and supporting core industries where they can contribute their skills, including higher education, technology, medicine and research.

Several attendees said they were impressed by the mayor's remarks.

An executive from a renewable energy company in Italy said he was struck by Menino's commitment to support human capital.

"He speaks very fast," said Guido Borghi, who owns Movie Magic International, a film company. "But he says so many interesting things. I really love Boston."

Menino arrived Friday at the Ambrosetti Forum, dubbed "mini-Davos" after the premier economic conference held each year in Switzerland. The guest list, along with political luminaries, features top executives from and Google, and Nobel laureates in chemistry and medicine.

The setting is the Villa d'Este, a five-star luxury resort in a Renaissance villa nestled in the Italian Alps on the southern tip of Lake Como that has housed guests from Napoleon to Mark Twain, Clark Gable to Madonna.

Guests often arrive by helicopter. Some come by private yacht.

Menino is staying with his wife, Angela, in a fourth-floor room with a mountain view. He has attended several sessions, including one on science and technology and another about institutional development, but has spent most of his time networking.

By last night, Menino had chatted with the president of Stanford University, former assistant secretary of state Richard Holbrooke, chairman Peter Sutherland, and CNBC anchor Maria Bartiromo. And he had collected a pocketful of business cards, which he fanned out proudly to showover a cappuccino with his wife: a New York-based insurance executive, a Milan-based investment banker, and a British supermarket chain owner. Menino said he plans to speak with all of them about doing business in Boston.

"It's always about networking, who you meet," he said. "You never know who'll be able to help you later."