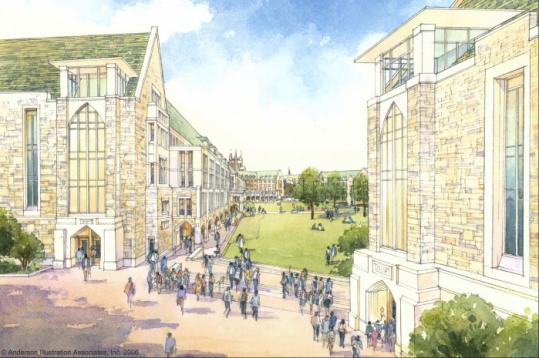 Boston College is gearing up for $1 billion in new construction and renovation over the next decade.

Newton is facing $12 million in budget cuts for next fiscal year and a deficit that's expected to grow.

A number of city officials and residents want the university, the largest tax-exempt institution in Newton, to contribute more toward the city's diminishing bottom line.

Boston College, which occupies three campuses on 223 acres in Newton and Brighton, pays Newton $100,000 a year in lieu of property taxes, plus a varying amount in contributions to local nonprofit organizations. Last year, the total paid by the college was in excess of $119,000.

The payment in lieu of taxes, or PILOT, agreement is to reimburse the city for the expense of services it provides BC, and replace some of the revenue it would otherwise collect on the properties.

Mayor David Cohen, whose request for a $12 million property-tax increase was defeated soundly by voters last month, intends to ask the university to renegotiate the agreement and pay more, said spokesman Jeremy Solomon. He said the mayor does not "have a specific figure in mind."

With the city cutting teaching and police jobs, and closing branch libraries to balance the budget, calls for affluent local institutions like Boston College to contribute more money have surfaced in discussion groups, comments from future mayoral candidates, letters to the editor, online blog comments, and the Board of Aldermen chambers.

Cohen responded to the buzz by saying he intends to visit the issue with a number of local institutions, not solely Boston College.

"The mayor is aware that we need to leverage all the revenue sources we can, and approaching Boston College is on the list," Solomon said.

The agreement between Newton and Boston College was established by then-Mayor Theodore Mann in 1985. The city has one other PILOT agreement, with the Stone Institute nursing home, which paid $34,460 this year, according to Newton's comptroller, David Wilkinson.

Boston College spokesman Jack Dunn said the university, which contributed $261,000 to Boston in 2006 for its Brighton properties, "feels its payments to both Boston and Newton are appropriate."

He said that the university's annual contributions in volunteer time and services to both cities are in excess of $4 million, with at least 444,000 in volunteer hours, Dunn said. The school also adds $1.3 billion to the local economy, and is among the largest employers of Newton residents, he said.

"We think that's the most effective way for the university to contribute to its surrounding communities," Dunn said.

Solomon said that the mayor is aware that the university "contributes to the community in more ways than just writing a check for $100,000," and noted that BC allows city employees to take courses tuition-free, and donates volunteer hours and money to nonprofit groups in Newton.

Boston College's 10-year Institutional Master Plan, which would make it the first university in Boston to have the capacity to place all of its undergraduates - for BC, 8,600 students - in on-campus housing, was recently submitted to officials in Boston. It faces a 60-day comment period followed by hearings in front of city boards.

The college expects to submit a proposal to Newton's planning department in the next month, Dunn said.

Solomon said the master plan, which Boston College presented to the mayor more than eight months ago, is a good one for the university and for Newton, but will require discussions about fire coverage, water usage, and other logistics.

Malcolm Salter, chairman of the city's Citizen Advisory Group, which was formed last month to help identify revenue sources and cost-cutting measures, said the notion of BC's economic impact and job contribution as adequate compensation for its impact on Newton is "not a convincing argument."

"Private businesses pay taxes and they also contribute jobs," he said. "As nonprofit institutions like Boston College expand their footprints and their capacity to pay, it's inevitable that they will be under significant pressure to increase their payments to municipalities for services."

Salter, a former Harvard Business School professor and corporate consultant, said the advisory group intends to do a detailed analysis of what is reasonable to ask from an institution like Boston College, but said that simply based on inflation the university's payments to the city should have at least doubled by now.

Salter was also a member of the city's Blue Ribbon Commission, which late last year released a report on Newton's finances that urged officials to obtain payments from Newton's five colleges, whose properties have a combined assessed value of $450 million. If Boston College, Lasell College, Mount Ida College, Andover Newton Theological School, and Hebrew College paid property taxes, the city would collect nearly $6 million annually, according to the commission's report.

Other high-profile figures supporting PILOT programs as a key to improving the city's finances include state Representative Ruth Balser; Rob Gifford, cochairman of Move Newton Forward, which had pushed for the tax increase; Jeff Seideman, cochairman of a group fighting the Proposition 2 1/2 override request, Newton for Fiscal Responsibility; and two unofficial mayoral candidates, Alderman Ken Parker and Setti Warren, former deputy state director for US Senator John Kerry. In the run-up to the override vote, Cohen announced that he would not be seeking reelection next year.

Parker proposed a resolution during the Board of Aldermen's budget deliberations this spring calling for Cohen to ask the city's nonprofit educational, religious, and charitable institutions, which own a combined $2 billion in tax-exempt property, to contribute a quarter of what they would if they were paying taxes.

The board approved an amended resolution, taking out the request for a specific percentage.

"We have to put a value on the services each institution is receiving and ask them to pay a portion of it - it's a negotiation process," Parker said. "With Boston College, it's been the same number for two decades, so it may be a logical time to reevaluate the number, considering what other colleges are paying their communities, and even what Boston College is paying Boston."

Warren, in a telephone interview the day before he returned to Iraq to complete a one-year tour as a naval intelligence officer, said, "The mayor and the leadership of Newton need to take an aggressive approach to finding new revenue sources, including PILOT programs."

But he also said the city needs to look beyond the in-lieu payments, calling them "one piece of a much bigger picture Newton has to explore."

Solomon concurred, saying, "When we face a $12 million structural deficit, PILOT payments can be a small part of the solution, but clearly there's not enough money there to solve the problem."

Some aldermen said PILOT agreements are important, but the city should tread carefully with Boston College and consider alternative sources for help balancing the budget.

Alderman Lenny Gentile said the city shouldn't single out Boston College, given that such payments are voluntary and "it starts the discussion off on the wrong foot."

Alderman Lisle Baker, who is president of the board, said the city could also look toward more in-kind contributions, given that Boston College is the only educational institution now making a monetary contribution.

Rachana Rathi can be reached at rrathi@globe.com.