THIS STORY HAS BEEN FORMATTED FOR EASY PRINTING
Fenway

On a brisk night at the park: Look, Jonathan, no hands! 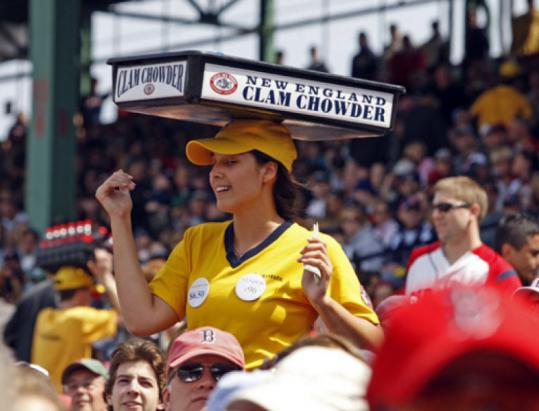 It's a cool evening at Fenway Park when Pearl Houghteling emerges from the center-field concourse and starts to scale the bleachers. "Chowder," she yells, "anyone want some chowder?"

"You gotta say it with no 'r,' no 'r' at all, to sell it," one wise guy says. But what most fans notice is that she's carrying the creamy delicacy on her dome, with no hands.

Several hawkers sell clam chowder at Fenway. But the 21-year-old Brookline native and biology major at Harvard (who once wrote a report about "the authenticity of the Fenway experience" for an anthropology class) is the only one who hauls the load on her head. It's easier to make change that way, she says.

Pearl began her balancing act in the summer of 2006, starting with ice cream and water. Last fall, the park began offering Legal Seafood clam chowder - in 12-ounce cups at $6.75 each.

Sales of clam chowder, which is offered only when the weather is cool, average about 2,000 cups a game when the temperature drops below 50 degrees, says an official with Aramark Corp., Fenway's food-service provider.

Houghteling insists that she's never dropped soup, but she did have one near-accident when she was hawking water. "Once upon a time, Jonathan Papelbon gave me a thumbs up for balancing the water on my head," she says. "I think that's the closest I've ever come to dropping anything. I felt pretty cool after that."