In more public places, cameras are on watch 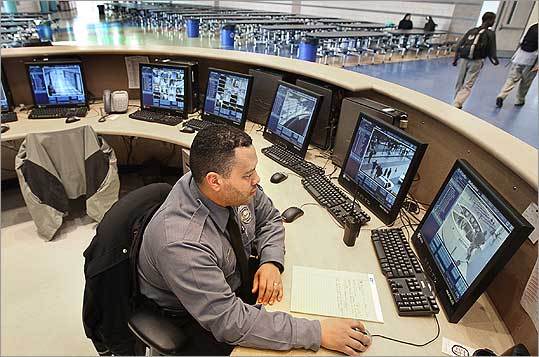 Over the past few years, some patrons of Lexington's Cary Memorial Library have had the misfortune of encountering a person exposing himself.

Five such incidents, along with vandalism that destroyed about $13,000 worth of property, prompted library officials and police to consider installing surveillance cameras, which increasingly are being used by local authorities to help maintain law and order and to keep property losses to a minimum, they said.

"We can't provide enough staff to be paying attention at all times," said library director Connie Rawson. "I think all public libraries are struggling with the same issues."

A number of communities in the region, including Lexington, already use surveillance cameras in the streets, public buildings, or schools to deter vandalism and other crimes, or gather intelligence information, raising concern among critics that the cameras threaten civil liberties. Some communities have them in multiple locations for multiple purposes. Lawrence High School has 300 cameras trained on students and staff.

In some cases, a rash of illegal activity or a particularly horrific crime prompted officials to heighten security, but, just as often, they have obtained the technology simply because they can. In a time of budget cuts, short-staffed officials sometimes welcome it as a substitute for hiring more employees.

Last month, for example, while the buzz at the Burlington Mall was all about the new Nordstrom department store, another quieter advance was taking place - the installation of three surveillance cameras to record any activity in the parking lots.

The $20,000 security system is intended to deter crime and to record any illegal acts for later investigation, said Burlington Police Chief Francis Hart. The popular mall draws an estimated 14 million patrons a year.

No particular incident prompted the beefed-up security, Hart said. Instead, the state Department of Public Safety made money available for security systems, and Burlington took advantage of it. The high-resolution, closed-circuit system sends images through a special fiber-optic cable and can store them for future use. The mall owner, , paid for the wiring, Hart said.

"I just saw it as another tool," Hart said. "A mall always draws crime."

Unlike the mall's sophisticated system, a single surveillance camera is being used by some communities as a crime deterrent in trouble spots. In Arlington, the camera eyes a skating rink; in Methuen, it looks over a basketball court, police said.

In Lawrence, the police have two mobile cameras that can be placed in a location of repeated criminal activity, Police Chief John Romero said. The cameras have helped catch illegal dumpers on two occasions, he said.

Romero said a surveillance camera might help solve an arson last month at the El Centro nightclub. The digital read-back clearly shows a car driving up, a person tossing liquid, presumably gasoline, from three watercooler jugs, and then an explosion and fire, he said. In that case, the camera is privately owned.

Now, with a rash of recent burglaries of abandoned homes, Romero said he believes surveillance cameras could "definitely serve a purpose."

Arlington Police Chief Frederick Ryan concurred. While emphasizing he did not want to speak for the schools, Ryan said he believes a surveillance camera behind the high school could help protect athletic fields and equipment.

About a year ago, he said, vandals lit a bonfire on the field that caused about $100,000 in damage. Even without a surveillance camera, police did catch a perpetrator, he said. But a security system would have been useful in a more recent case in which the high school field press box was broken into, he said. That case has not been solved.

"I think that the use of cameras can certainly enable public officials to protect public assets," Ryan said.

Some oppose the added security, saying it could pose a threat to civil liberties.

"We used to think of the United States as a place where the government was not spying on citizens," said Sarah Wunsch, a staff attorney for the American Civil Liberties Union of Massachusetts. "It's one thing for a private business to have a surveillance camera on a particular spot on their property. When it's the police or other law-enforcement agency, it takes on a whole other meaning."

Wunsch said she could understand the use of cameras to survey a spot with a recent rash of crime. But she questioned continuous use in libraries or schools. "I think it teaches kids a terrible lesson - that it's OK to be spying on everybody."

She said police, school, or library officials considering the use of heightened surveillance should have rules about who would be allowed to see stored videotapes, and for what purpose.

She called the use in libraries "really troubling. Libraries are places where people have always felt free to read what they want to read. It's a little bit creepy."

Vandalism of school property is a constant irritant, officials said, causing the purchase of surveillance cameras.

Lowell High School has had 20 surveillance cameras for several years, according to Jay Lang, the school's business manager. He could not say for exactly how long.

In Lawrence, at least seven of the schools have an array of 32 to 64 cameras sending images back to central monitors, while the new high school has some 300 inside and outside, according to Kevin Clement, the system's school safety manager. When communities build new schools, he said, designs often come complete with a security package, including cameras, monitors, and wiring.

In 2001, when Medford had elementary and middle schools built, they came with such a security system, said John Buckley, the schools' management and operations director.

Even the tiny town of Tyngsborough, population 6,800, has security systems with cameras in all four of its schools, according to George Trearchis, the system's director of building and grounds.

"As of right now, cost is a huge factor," Burrows said. "We have to justify everything. Being in a rural setting, I don't think we have a need for it."

The Medford Police Department has no surveillance cameras to help and would be pleased to have them, said Chief Leo Sacco Jr., who added that such a system would be particularly useful now that his roster of employees has dwindled.

"I would love to have cameras placed throughout the city at various spots," he said. "We don't have enough officers any more to cover some of the troubled locations."

But Sacco said it is unlikely he will get cameras any time soon, given budget constraints.

Public libraries, meanwhile, are the newest frontier for such security systems.

The proposal to install cameras in Lexington's library is only in the talking stages, but officials are taking it seriously - contacting vendors, determining the possible number and placement of cameras, and working out a policy as to how to use them.

Arlington, Bedford, and Winchester are among a number of local communities that have installed camera security systems in their libraries. Two years ago, Winchester, which had only the entrance to its library guarded, put cameras in the aisle containing audio-visual materials, where theft was common, said library director Lynda Wills. Afterward, she said, pilfering dropped dramatically.

The purchase and use of surveillance equipment sometimes involves little public scrutiny, but some communities undergo painstaking introspection to ensure a balance between security and civil liberties. Some local officials will not divulge whether there are cameras in place in their municipalities.

Lowell, for example, has covert cameras used for investigative purposes, but police Deputy Superintendent Robert DeMoura declined to say how many there are or where they are. Kathleen O'Doherty, director of the Woburn Public Library, will not say on record whether that facility has cameras.

In Lexington, the public will have ample opportunity to debate the proposal for surveillance cameras in the library.

"Nobody wants to infringe on anyone's civil liberties," said police Lieutenant Joseph O'Leary, who heads Lexington's detectives bureau. "Any program that enhances security needs to take into account a very balanced approach. The message has to be very clear: Protect the assets and protect the staff and patrons of the library from acts of vandalism or other crime."

Connie Paige can be reached at cpaige@globe.com.