Following his son into a new world 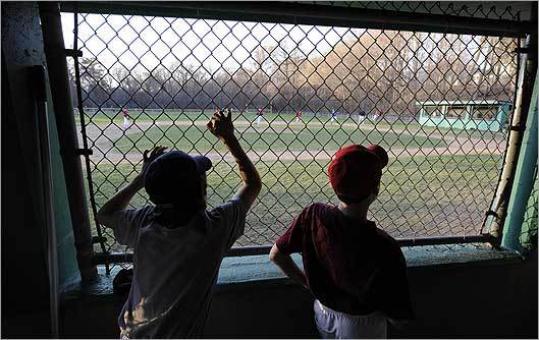 A Little League dad reports from the field:

My conversion into a sports fan began with my son Will's first authoritative flick of a fat, purple, plastic bat. For decades, I'd seldom watched or played sports. But on a spring afternoon when Will was 3 1/2, my wife and I issued him a toddler's toy baseball kit. By midsummer, our Newton Lower Falls neighbors drifted over to witness a little dynamo wielding a bat his own height and plunking homers into their yards. Our street's sports sages declared a "natural swing."

Eight years after the purple bat, Will is starting his final Little League season. He is a Cub in the West Newton Little League Majors. His interest and skills have drawn me right into the dugout, a late and lowly acolyte, bookkeeper, ball boy, and occasional soft-tosser, the least agile of several assistant coaches.

And so, on a squally Sunday evening, with five practices to go before opening day, his team members arrive wearing uniforms that show they are getting ready for the coming season. At earlier practices, they wore any old baseball cap. Now, some of the boys have gone over to official white polyester pants, and the players back from last year have dug up their blue team caps with a capital C over the visor.

The field at their feet has been greening up these last few days. Overhead, the sort of clouds that have lions and lambs in them float past. The pitching machine whines, spits out high fly balls. The boys catch them with a casual style. The coach shouts names: "Thomas!" "Alex!" "Joey!" "Will!" "Vito!"

Vito's teammates watch him go back, back, back. He stumbles a few times. He snags a tough one. Serious business.

Just when things are getting too serious, an outfielder exclaims, "Hey, that cloud looks like a cauliflower!" Nearby players glance upward. The resemblance is photographic.

One of the boys, Mike, takes his turn pitching. Last year he'd been all legs and arms - growing into himself. This year, though, he runs off six fast, on-target sinkers. Coach Kevin Fitzgerald, who's pretty good at maintaining a benign poker face even in dire moments, grins with satisfaction. He pencils the sixth-grader into the pitching rotation.

A national online coaching culture has charted, filmed, and posted drills that optimize every efficient footstep and tactic in the game. Coaches Fitzgerald and Bob Joyce eye play after play on the field. They prescribe drills that reinforce strengths and remedy vulnerabilities - the sideways steps preceding relay throws, the soft hands that microadjust in hundredths of a second to snatch up scampering grounders. The team of 11- and 12-year-olds takes to coaching suggestions like professional dancers polishing new steps.

Coach Bob is a lawyer with a Newton firm. Each year, he forsakes a fortune in billable hours to coach two baseball teams - with his son, Alex, on the Cubs, and his 9-year-old, Thomas, on an AAA squad. Bob also is president of Newton Youth Hockey, and coaches his son's Squirt One travel hockey team. Coach Kevin, a lieutenant with the Newton Fire Department, sometimes hitches a ride to the field on a passing hook and ladder, and joins his boys, Kevin Michael (always called by two names) and Brian.

At this practice, five dads show up and drill the 11 team members.

In the opening minutes of the year's first field practice, Coach Bob decreed that following a bad throw, and without any command from him, they must drop to the ground and offer five pushups in penance. Boys drop on their own through every practice, and scold teammates who forget. The will to improve is at hand. It's a good place, a promised land of consenting learners, a description that wouldn't necessarily cover all of them in a classroom.

In batting cages, during earlier sessions at the Extra Innings complex in Watertown, you see who will drive in runs this season and who may struggle. By comparison with the other boys, my Will is smaller. He'll hit his share of singles. His speed might turn some into doubles.

"Keep that head in, Willie-Mo!" Coach Bob shouts to him across the batting cage.

On the car ride home, Will confesses, "I want to hit just one out."

The team began to fit together weeks earlier, over a working lunch late last month at the firehouse. There were clipboards and sandwiches on the table, intercom squawking alerts just before Kevin's shift, as I listened to a detailed rundown of tryout ratings. Through the local-coach network, we had the lowdown on the new kids, and knew the others from past seasons. We had a high draft pick, decided on trying for two 11-year-olds, both named Thomas. The clipboard implies that one fields as though there's glue on his glove and the other is a hitter. Bob says for the first time a word of high praise that I will hear often: "Great skills - the most coachable kid I've ever worked with. You tell him to do something, and he does it that way."

Little League gathers and screens for the extreme coordination, speed, strength, and grit that just might lead toward careers like those of Jonathan Papelbon or Jacoby Ellsbury of the Red Sox. But with about 1.8 million kids internationally, and 350 in Newton West Little League, in all the decades of baseball, only a few Newtonians and a few hundred Massachusetts kids have ever reached the big leagues.

Sports career advancement can't be why all those kids and coaches have gotten involved. The yearly excitement isn't much about winning, either. Only one of Will's teams has ever taken its division championship, and the glow didn't last long.

Perhaps the attraction is the chance to try hard, in a place safe enough for such presumptuous assertiveness. It pulls kids in, and coaches, too. Starting with T-ball years back, Will's coaches urged kids not to win but to try to win, with some crucial caveats thrown in about the Golden Rule, and our best national values, and respecting authority: Try really hard, but "never ridicule members of your team or the other," Coach Kevin said at an early-season team meeting. Try, but ". . . always with sportsmanlike conduct. Never question an umpire," he added. And try, but instantly "accept the coach's word. . . . Don't ever argue about when you're playing, or out, or pitching, or what position you are playing."

Throughout the three-month season to come, some parents in this especially blue suburb of our blue state may feel like refining these stipulations. But Little League teams prohibit parental comments about on-field events. Many of the parents are less authoritarian at home than the coaches are on the field. The first time I saw Will dropping down on his own and giving the coach five, it was an eye-opener.

In the dugout, many of the kids remain unaware of this parental watchfulness. They are cool and very funny. They fuss distractedly, cackle at their good luck, flash vanity, stew in anguish before shaking off bad plays, and note teammates' stumbles impatiently now and then. But they keep working fiercely.

Such training in frankness, grit, reliability, acceptance of weakness, and well-meaning authority wasn't part of my own childhood, and, I'm quite happy to say, is part of my son's.

Mark Kramer will chronicle the Cubs' Little League season periodically over the next several weeks. He can be reached at kramernarrative@gmail.com.