As loans dry up, some settle for second choice 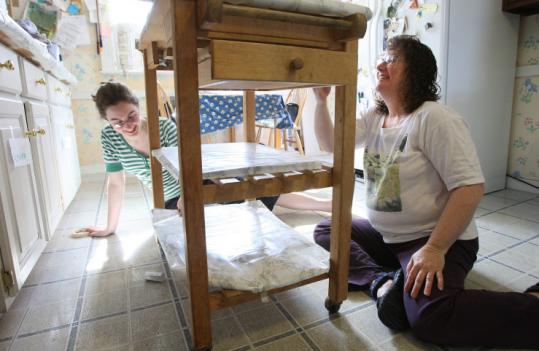 For Molly Wexler-Romig, Bard College seemed the perfect match. The small liberal arts school in upstate New York has a great academic reputation and strong theater arts program - a must for the aspiring actress. When she first visited last fall, she relished the school's liberal, hippieish atmosphere. So when she received her acceptance letter earlier this month, the choice was obvious.

But now, where she goes to college will come down to dollars and cents, not merely good vibes or academic fit.

Because of the uncertainty surrounding the burgeoning student loan crisis, she may have to forgo the $50,000-a-year school for Trinity College in Hartford, a slightly more conventional school that offered her nearly twice as much financial assistance.

"Trinity is looking really good just because of the money," said the 18-year-old Framingham High School senior. "My parents are trying to support me but they don't have all the money in the world."

Just weeks after jubilant high school seniors celebrated the thick admissions envelopes that landed in their mailboxes, students are now forced to confront another reality that can be harder to swallow than an outright rejection letter. Many will not be able to afford their top college choices after all.

As financial aid packages roll in - often saddling families with more loans than grants - high school guidance counselors are at a loss about how to advise students and their parents.

A Boston Latin School counselor recently held painful discussions with two students about giving up their dreams of attending New York University and instead going to UMass-Amherst, which costs a third as much. The head counselor at Framingham High said he would not be surprised if community colleges see an uptick in enrollment as students eschew pricier four-year schools. And at Newton North, counselors are fielding calls from parents worried about their children's futures.

"They don't know where to go, and I don't know what to tell them. This is coming at the absolute worst time," said Brad MacGowan, college counselor at Newton North High School and former president of the New England Association for College Admission Counseling.

The association's e-mail listserv is buzzing with counselors wringing their hands about how to best guide students as the rules change for the first time in his 23-year career, MacGowan said.

As more students apply for loans to meet soaring college costs and to supplement schools' financial packages that don't fully meet their needs, "these loan companies are saying, 'We're not there for you any more,' " he said. "It's really creating quite a problem."

Roughly 50 firms have stopped writing certain federally backed or private student loans since December. In the wake of the April 7 bankruptcy filing by The Education Resources Institute Inc., a Boston nonprofit that guarantees student loans, , the third-largest student lender in the country, announced this week it would no longer offer private student loans.

recently said it would no longer offer federal consolidation loans, which allow parents and students to package loans into a more manageable single payment. And the Massachusetts Educational Financing Authority, a nonprofit state organization, also said this week it would stop making federal student loans.

As a result, students will have fewer lenders to choose from; certain loans will probably become harder to get, especially for those without stellar credit; and lenders are charging higher rates.

Lichtenstein said she considered taking a year off before starting college to work and save money for tuition. But luckily, she ended up getting a significant amount in grants from Rutgers, the state university of New Jersey, where she plans to major in English and education.

While students don't typically apply for loans until the summer, most schools require a commitment - and deposit - by May 1.

If Wexler-Romig chooses Bard, she and her parents would have to come up with more than $20,000 to supplement a $24,500 grant from the college.

The teenager said she would probably have to get more loans than the $5,000 in federal loans offered through the school. But her mother, worried about the availability of private loans and the costs of repayment, said that would be the last resort.

"I'd rather get a second job," said Debra Wexler-Romig, Molly's mother. "I'd rather sell my jewelry. I'm anxious because I want her to be happy."

She is hardly the only nervous parent. Jeannette Huezo, said she feels blessed that her son Diego, a Needham High student, has earned nearly a full ride to Boston University, but she has four younger children whose college tuitions she already worries about. With a combined income of $65,000, she knows her children cannot make it without taking out massive loans if they don't earn scholarships.

"The kids in this country should not be concerned about getting into debt to get a quality education," Huezo said.

Despite parents' frayed nerves, some college financial aid directors advise them not to panic.

Bob Giannino-Racine, executive director of ACCESS, a nonprofit that offers free financial aid advice and scholarships to 2,000 Boston high school seniors each year, said his counselors are telling students to pick schools whose financial aid packages leave them in the least amount of debt.

"But we just have to be careful that we're not just blindly sending kids to a place they'd rather not be just because they can afford it," he said. Long-term data show that students who do not end up at their first-choice school are less likely to graduate, he said.