THIS STORY HAS BEEN FORMATTED FOR EASY PRINTING
Shifting gears

For cycling czar, gung ho is only speed 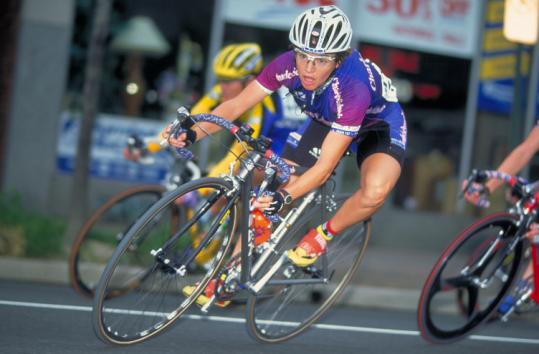 Nicole Freedman's official position may be director of bicycle programs for the City of Boston. But she's frequently referred to as Boston's "bike czar." It's a dictatorial-sounding job title that comes with big expectations to change the local cycling climate, and quickly.

"What I didn't want to do was spend months to years creating a very, very, very detailed plan, when what we need right now is some of the real fundamentals," Freedman said by way of describing her philosophy. She is also aware there's no need to reinvent the wheel. "We are not the first city to have bike programs. How can we really pick and choose among the best practices to make Boston the best?"

I spoke with Freedman in her ninth-floor City Hall office about her plans, six months after Mayor Menino hired her to head up the "Boston Bikes" program "to make Boston a world-class bicycling city." I also learned about her fierce commitment to cycling.

The 35-year-old Wellesley native started at MIT, then transferred to Stanford, where she got a bachelor's degree in urban planning. "Or, cycling with urban planning on the side," joked Freedman. From 1994 to 2005, based in the Bay Area, Freedman biked full-time as a professional racer, and competed in the 2000 Olympic Games in Sydney.

She retired from racing in mid-2005 and moved back to Boston to help organize Hub on Wheels (this year, Sept. 21). After two years with the annual citywide riding event, Freedman was appointed the city's cycling czar Sept. 20 to put a full-time face on Menino's ambitious program. The Boston Bikes Summit, a three-day conference in October featuring national biking experts, cosponsored by the LivableStreets Alliance and the League of American Bicyclists, was her office's first major initiative and helped glean "best practices" for Boston.

"The mayor started cycling last year," said Freedman, who bikes to work from her home in Jamaica Plain. "Through his interest he really realized the benefits of cycling for the city. There are some very powerful economic benefits, health benefits and obviously environmental benefits."

But bicycling advocates are understandably skeptical of Menino's pie-in-the-sky talk. The mayor's previous efforts to improve cycling conditions came to an abrupt end in 2003, when bike coordinator Paul Schimek was laid off and an advisory committee was disbanded. "We did put together a great plan a number of years ago," Freedman said. "Nothing really was implemented."

Now that Menino has declared himself a bicycling convert, present and would-be cyclists hope the administration will put its money where its mouth is.

"Everyone knows this is important to the mayor," Freedman said. "It's not [only] happening because of the mayor. There's a lot of enthusiasm internally." Her top goals include installing 250 bicycle racks, creating several miles of bike lanes, and fostering a visible bike culture through citywide programs like "Bike Week" (May 12-18) and appointing another advisory board.

Even to an avid but average 41-year-old urban biker like myself, it's clear the plight of bike commuters could be improved. I use my mountain bike to get around Metro Boston, but sometimes I'd like to take it on the T. Readers of this column complained that bringing bikes on the subway and commuter rail is far from convenient (they're only allowed during off-peak hours, which defeats the purpose of commuting by bike). Suburban riders wish paths like the Minuteman, which ends in Cambridge, would connect with routes to bring commuters directly downtown.

Freedman had no easy solution for either issue.

"We absolutely want to see projects like that happen," she said. "I've definitely heard a from a lot of cyclists that's they'd like to take their bikes on the T at rush hour." She says she's working in concert with MBTA officials, who plan to equip half of their bus fleet with bike racks (right now the figure stands at 35 percent) and install racks at 100 transit stations by year's end. Expanded bike access to trains remains a question mark.

As for long-distance paths, "cooperation from the regional agencies is good," Freedman wrote in an e-mail, but "projects are very complex and take years to find funding and bring to fruition."

Many questions, few answers. For now, Freedman, who is operating without a marketing budget, said she's "focusing on the low-hanging fruit," implementing basic improvements where her efforts can "make a dramatic difference." Of course, funding will have to follow; bike lanes and bike racks cost money. But Freedman said city planners are on board this time and real progress - bike racks, bike lanes, map, advisory board - will be made by year's end. Moreover, she's encouraged by the gifts we already have.

"We're a city that was laid out before the car. People have lived here before without a car and they can do it again."

For more information on the Boston Bikes program, and the bike map project, visit cityofboston.gov/bikes, or send an e-mail to Nicole.Freedman.bra@cityofboston.gov.