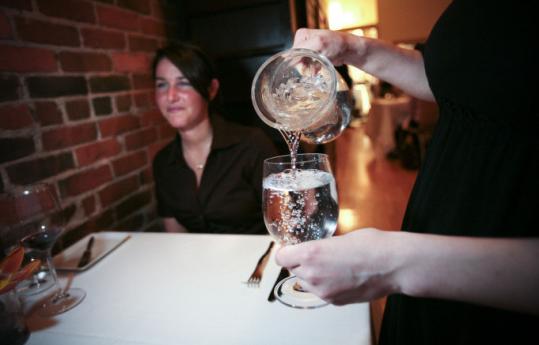 At the restaurant T.W. Food, a black-clad server circulates, pitcher of water in hand. "Good evening," she says to a table of diners. "Can I offer you a glass of Cambridge filtered?"

At Small Plates in Harvard Square, the menu lists "Individual Bottled Water," but instead of a price you'll find this message: "Not sold here because plastic bottles are BAD BAD BAD for the environment & that water is really no better than tap water."

Boston-area restaurants are beginning to climb aboard the no-bottled-water bandwagon rolling in from California, where big-name establishments such as Berkeley's Chez Panisse have sworn off bottled and Mayor Gavin Newsom of San Francisco decreed last summer that city departments and agencies would no longer purchase it.

In fact, 80 Boston restaurants are participating in a UNICEF initiative in which restaurants ask their guests to contribute $1 or more for their glasses of tap water. Funds for the program, which ends today, World Water Day, go to providing children with safe drinking water.

Until recently, you probably wouldn't even have heard the words "tap water" in a Boston restaurant, and those words are still spoken infrequently. "Can I offer you bottled water or . . .," a waiter might say, trailing off as if the alternative is too shameful to utter. Or, most common, "Would you like sparkling or still?" Unless a customer then specifically asks for tap, the drinking water for the meal will come in a bottle, at $6 or $7 a pop for the same product you can buy in a store for less than half that. For restaurateurs, it's a tidy - and easy - profit.

For diners, it can be a burden. "Usually when they say 'Bottled, sparkling, or tap,' I say 'Tap,' " said Karen Schneider, 29, who works in public health. "It's one addition to the bill I'm not willing to pay. I drink tap water at home, so why should I change when I go out?" Still, she sometimes feels self-conscious about it. At 33 Restaurant & Lounge recently, she said, "they asked if I wanted sparkling or tap. I said 'Tap,' and I felt like I was the person sitting there waiting for my friend and eating the free bread who only wanted tap water."

"Restaurants still try to sell a lot of bottled water because it makes them a lot of money," said Tim Wiechmann, owner and chef of T.W. Food. "I don't really push it like that. I like bottled water, but I don't like the waste it produces."

According to the Beverage Marketing Corp., a beverage industry consulting firm in New York, in 2006 Americans bought 31.2 billion liters of bottled water. The think tank Pacific Institute says that more than 17 million barrels of oil, not including energy for transportation, were used in plastic bottle production; bottling water produced more than 2.5 million tons of carbon dioxide; and the statistics go on. The Container Recycling Institute's running tally of the number of beverage cans and bottles - not just water - that have been "landfilled, littered, and incinerated" in the United States thus far this year was 28,567,815,149 yesterday evening and rapidly climbing.

How does this translate to a single restaurant? Said Mike Kossa-Rienzi, general manager at Chez Panisse, "We went through 25,000 bottles a year, so think about the waste. The city recycles, but that's a lot of glass. Not only that, there's the impact of shipping all that water. We got ours from Italy. It was being bottled in Italy, trucked to a port, shipped around the world, then trucked to our restaurant."

Boston is a promising place to try cutting down on that waste. "Our forefathers 150 years ago had the good sense to create a really good water system that included a series of reservoirs that provide pristine sources of abundant water," said Ria Convery, communications director for the Massachusetts Water Resources Authority. "It puts us in a very small percentage of water systems in the country that are not required to filter their water because the water source is so good."

Though our supply rates favorably, recent scares across the country about pharmaceuticals and E. coli in the water system may leave some feeling skittish. "A lot of people are afraid to drink tap water," said Ken Oringer, chef-owner of Clio, Uni, Toro, KO Prime, and La Verdad. "We give people the option: Would you like tap water, or bottled still or sparkling water? More and more people are starting to go for tap."

At Toro, Oringer serves spring water that's bottled for the tapas bar in Maine. "We recycle the bottles and have them refilled every week," he said. "The water's more expensive for us. It's twice the price of Fiji. But we feel good about it."

Bottling companies are taking note of changing attitudes. "What we are seeing are restaurants, as so many other parts of the population, want to be environmental and responsible about what they are doing," said Jane Lazgin, spokeswoman for Waters North America Inc., whose brands include Poland Spring, Perrier, and S.Pellegrino. "We too are working to minimize our footprint, with sustainable management of water resources and plant efficiencies."

And the efforts restaurants are making can matter. "There are so many thousands and thousands of restaurants in the US alone, if a lot of the major ones in major cities do it, we can make a dent," Oringer said. "Within five years you'll be hard-pressed to find bottled water coming from Fiji. Everybody is going to be using locally filtered."