Sides accuse each other of high-pressure tactics 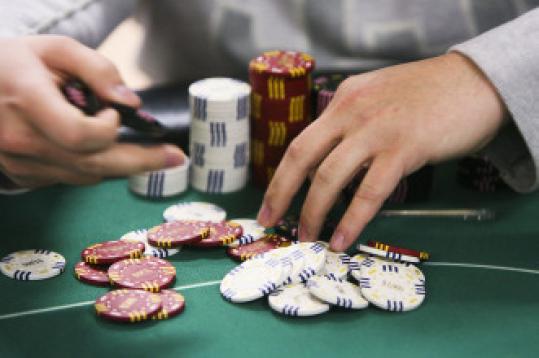 The state's already tense gambling debate erupted into a political brawl yesterday, as casino proponents charged that House Speaker Salvatore F. DiMasi is orchestrating a defeat of the governor's casino legislation even before a legislative committee publicly airs the pros and cons next week.

Furious political maneuvering spilled into the open, sparking heated exchanges through the halls of the State House. The skirmishes broke out in advance of the first formal hearing, scheduled for Tuesday, on Governor Deval Patrick's bill to license three casinos in the state.

"You could feel the tension," said Representative Martin J. Walsh, Democrat of Dorchester and a casino supporter. "There were a lot of reps walking on eggshells."

DiMasi and other House leaders continued pressuring individual lawmakers to fall in line with the speaker and oppose Patrick's bill. DiMasi issued an open letter in which he accused Patrick of concocting a "quick-fix solution" to the state's economic problems. Patrick's administration responded that DiMasi appeared to be reneging on a commitment that he would allow a "full and open debate on the merits."

"From the signals we're getting, we're concerned that is not going to happen," said Patrick spokesman Joseph Landolfi.

Members of the Senate, which is mostly favorable toward casino gambling and has previously avoided the fight, were drawn into the feuding yesterday.

Senator Jack Hart, Democrat of South Boston, cochairman of the Joint Committee on Economic Development and Emerging Technologies, which will hold next week's hearing, said he was concerned that comments made by the speaker and other opponents made it appear the governor's bill is dead.

"It seems they've reached a conclusion," Hart said. "Why are they asking people to testify or members to come? I think it's a sham, and the people deserve better. . . . Give this bill and this idea a fair hearing, because it's our responsibility to do so, no matter how you feel on the thing."

But Hart's House counterpart on the committee - Daniel E. Bosley, Democrat of North Adams and a staunch casino opponent - had a tart response to the charges from Hart and others that the outcome has been determined.

"How stupid is that statement," he said. Although he said the committee vote is likely to send the House a negative recommendation on Patrick's bill, he said public testimony Tuesday will be taken seriously.

"We certainly will be there and ready to be dazzled or have an epiphany based on any new information we're given," he said. "But based on what I've seen out of the governor's office so far, there is absolutely nothing new here. We have run the numbers, and clearly they have not."

The issue has dominated Beacon Hill politics since the governor filed his destination resort casino bill in September, and it has been the central point of disagreement between Patrick and DiMasi, who has steadily increased the intensity of his opposition.

Patrick says it will generate billions in revenue and tens of thousand of jobs. But DiMasi has been dismissive of the potential benefits, saying that Patrick has relied heavily on industry estimates and that the governor's plan would import a "casino culture" to the state.

"I'm getting pretty disgusted," Wallace said at one point.

DiMasi issued a three-page letter citing a series of measures the Legislature has taken this year to generate jobs and calling the governor's bill "a quick-fix solution built on suspect figures supplied by the casino industry."

"Creating jobs and economic growth is not easy," he wrote. "We need to be smart and put systems and programs in place to insure that the business community builds and expands in Massachusetts. The governor's casino bill simply does not do this."

Each side accused the other of using aggressive tactics to try to sway the vote. House members said that DiMasi and his chief lieutenant, Representative Thomas M. Petrolati of Ludlow, were pressuring lawmakers to personally pledge their opposition to casinos before Tuesday's hearing. The vote will be taken before the House releases the budget, and DiMasi wields great power over how funding to local cities and towns will be distributed in a year in which the members must run for reelection.

According to several members, DiMasi is seeking to amass 100 votes or more, looking not just to win the vote, but to win in a landslide.

Opponents, in turn, accused administration officials of doing arm-twisting of their own.

"There are stories about the speaker twisting arms, but the governor's been pulling people in for three weeks telling them how important this is to them," said Bosley. "For some reason, it's become personal, and it should never become personal. It should be about the facts. You lay them out and take your chances."

The chief proponent of installing slot machines at the state's four racetracks, rather than building resort casinos, said he received assurances that his bill will be heard by the Legislature in the next several weeks.

Representative David L. Flynn, Democrat of Bridgewater, said he hopes that his "racino" bill will emerge as a compromise if the governor's bill fails.

"After the casinos, my legislation will be the only game in town," Flynn said. "It's a bridge to casinos, and we owe it to the tracks."

But DiMasi has voted against slots in the past, and his spokesman said he has not changed his position.

Opponents and supporters disagree about how much state revenue and how many jobs Governor Deval Patrick's casino plan will generate.