A blizzard too furious to forget 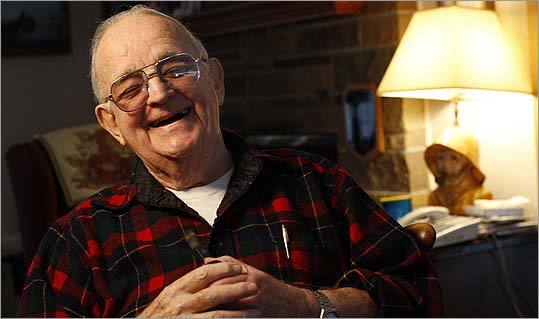 Elmer Pooler, 81, estimates he played a role in rescuing about 40 people in his more than three decades as assistant harbormaster and harbormaster in Scituate. (Globe Staff Photo / Matthew J. Lee)

Elmer Pooler snapped photographs to document the damage caused by the Blizzard of ’78. Hundreds of homes on the South Shore were destroyed. (Elmer Pooler)
Email|Print| Text size – + By Rich Fahey Globe Correspondent / February 7, 2008

Elmer Pooler was 12 when he made his first storm rescue. It was during the Hurricane of 1938. A prominent Quincy couple had motored out to Houghs Neck to watch the storm, and soon found themselves trapped by rising water. Pooler, who lived nearby, commandeered a rowboat and ferried them to safety.

Pooler, 81 and retired, made a career out of such rescues during his 34 years in the harbormaster's office in Scituate. But never was he tested like he was during the Blizzard of '78.

Thirty years ago this week, Pooler, then an assistant harbormaster, spent an unforgettable few days going head-to-head with the worst Mother Nature had to offer.

Scituate, of all the communities on the South Shore, bore the full brunt of the storm's fury. Hundreds of homes were leveled. A 5-year-old girl, Amy Lanzikos, was ripped from her mother's arms when a rescue boat capsized, and a neighbor, Edward Hart, also drowned in the incident.

The little girl's body was soon recovered, but Hart's was not. Pooler helped lead what would be a futile search effort; Hart's body eventually washed ashore in April.

The storm is etched indelibly in Pooler's mind. Waves were breaking 7 and 8 feet over the pier, he recalls, and wind gusts were peaking at more than 100 miles per hour. A gauge at First Cliff blew off after a gust recorded at 112 miles per hour. In a tidal surge the sea rose 17.5 feet above normal in Scituate Harbor.

"It was the only time in my life - the only time - that I knew I couldn't have gone out there if someone needed me," he said. "I knew I'd never get back."

The storm yanked boats out of the marina and pushed them a quarter-mile away into a marshy area. The fishing fleet lost 10 boats; another 15 to 20 were washed out to sea.

The blizzard wreaked havoc up and down the coast. Pooler would later learn that among those who died was a close friend, Frank Quirk, captain of the Gloucester-based pilot boat Can Do. Quirk's boat went down with all aboard while responding to a mayday call from the ship Global Hope.

As the storm raged, Pooler climbed aboard a 2 1/2-ton Army cargo truck - the so-called deuce and a half - and helped evacuate families from Lighthouse Point. Huge waves washed over the vehicle as it wended its way around 6-foot piles of rocks and dodged blocks of ice flying from the North River.

So severe was that storm that even the rescue boats had to be rescued. Early in the blizzard, the Coast Guard station in Scituate Harbor dispatched a craft to help rescue some fishing trawlers at the town pier. While trying to maneuver in the harbor, the Coast Guard boat became tangled in mooring lines and lost steering control.

The vessel was battered against the sea wall and rocks on the side of the building that now houses T.K. O'Malley's. Pooler, who had been monitoring the scanner, rushed to the scene. Each time the craft rolled on its side toward him on shore, he urged crew members to jump from the vessel into his arms. One by one they did, until all four were safe.

Pooler received a plaque from the boat's crew, commanded by Weymouth's Dave Fowler. It read: "In grateful recognition of the heroic rescue of USCGC 44318. Thanks, Elmer. Dave Fowler and the crew."

The plaque was made from wood from the famed Coast Guard tall ship Eagle. Another keepsake from the blizzard is a painting by a Coast Guard reservist depicting the rescue.

Pooler's stepson, Bruce Simons of Braintree, included Pooler's story on the website he created about the Blizzard of '78, hullnantasket.homestead.com, a treasure trove of stories, photos, and links about the storm. "There was a time when every time a storm hit Scituate, he'd be interviewed," said Simons.

Pooler estimated that in his more than three decades as assistant harbormaster and harbormaster, he had a hand in rescuing about 40 people. He also remembers the 20 who died in drowning or boating accidents, even a plane crash in the busy harbor.

The majority of the deaths, he said, were alcohol related and preventable, and have stayed with him through the years.

"The boats you can replace," he said. "The people you can't. It breaks your heart."

Of his friend Quirk, lost in the storm, Pooler said: "Frank was a close friend and a great help to me."

Pooler has slowed a bit in recent years, but still makes frequent tours of the harbor. "The harbor is his life," said Simons. "It always will be."

And Pooler still monitors the scanner for alerts on bad weather or boaters in trouble.

More than any other storm in Pooler's memory, the Blizzard of '78 stands out.

"It was the worst I've ever seen. I hope never to see another one like it."