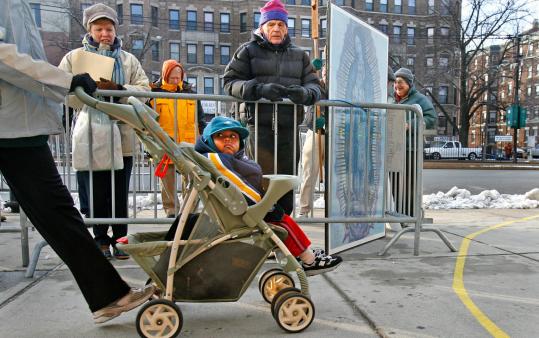 Ruth Schiavone was standing across the street from Planned Parenthood's Boston facility on Commonwealth Avenue yesterday, softly discussing her objections to the state's new buffer zone for protesters around abortion clinics, when a young woman walked toward the main entrance.

Schiavone raised her voice and immediately changed her tone.

"We have free help for you, dear," she shouted after the woman. "Don't let them kill your baby!"

Schiavone was one of about 30 antiabortion protesters who gathered outside the clinic. The clinic attracts pockets of protesters every Saturday, with a larger-scale vigil occurring every second Saturday. Yesterday, none stood closer than 35 feet from the entrance, a distance now mandated by state law.

The vigil was the first since Governor Deval Patrick signed a bill in mid-November establishing the 35-foot buffer zone between abortion clinic entrances and antiabortion protesters, a restriction that abortion-rights groups call the nation's strictest. Planned Parenthood and police officials reported no clashes between clinic staff, patients, and protesters at the Boston, Worcester, or Springfield Planned Parenthood clinics.

"For many years, patients and staff at these facilities were subjected to in-your-face harassments and intimidation on a daily basis," said Angus McQuilken, spokesman for the Planned Parenthood League of Massachusetts. "This is a law that is serving the purpose for which it was enacted. It is protecting the privacy, dignity, and safety of staff and patients alike."

"It's difficult anyway, but it is even more so to have this big bubble on the sidewalk that we have to run out into the traffic to get around," he said.

Yesterday morning, most of the women entering the clinic were approached by protesters, or "sidewalk counselors" as they call themselves, who attempted to hand them fliers and speak to them. The protesters followed the women until they reached the yellow line. The fliers suggested there are risks associated with abortions, and urged women to call a phone number for free help with unplanned pregnancies.

As the women entered the buffer zone, a handful of volunteers wearing blue vests displaying the words "Planned Parenthood Escort" held the women's arms or walked beside them into the clinic.

McQuilken said Planned Parenthood informs patients that they may encounter protesters as they arrive for appointments.

Around 8 a.m. Boston police officers erected metal barriers designating two areas for protesters on both sides of the issue and monitored activity around the area throughout the morning. No abortion-rights advocates were present.

He said protesters could voluntarily stand inside the rectangular barricade, as a group of about 20 protesters participating in the vigil did yesterday while praying and singing hymns, or stand elsewhere outside the arc, which Schiavone and a handful of other protesters did.

"They're given an opportunity to protest, get their message out, and pedestrians can walk back and forth without being impeded," Mancini said. "Our presence here, I think, has an effect on the behavior of people."

Since the buffer stretches into Alcorn Street on the west side of the Boston clinic's main entrance, Schiavone stood on the other side of the street for much of the morning, holding a sign that read "A child is a gift from God."

Schiavone, of Norwood, was one of three women who sued the state in 2000 over an earlier version of the buffer law, which prohibited protesters from coming within 6 feet of patients who were within 18 feet of a clinic entrance, unless they had the patient's consent. Their lawsuit failed, but the newer law was passed after abortion-rights advocates, clinics, and police complained the old one was difficult to enforce. She said the new buffer law limits her ability to exercise free speech.

"We have as much freedom to be on the sidewalk as anybody else," she said. "The people who are for abortion - for the killing of unborn babies - are allowed free access, but me, the rest of us, because we're trying to respect and defend human life, we have to stay away."

McQuilken said the new law protects the free-speech rights of protesters, while allowing "patients to access healthcare free from harassment and intimidation."