Manhunt after fatal attack had community in lockdown mode 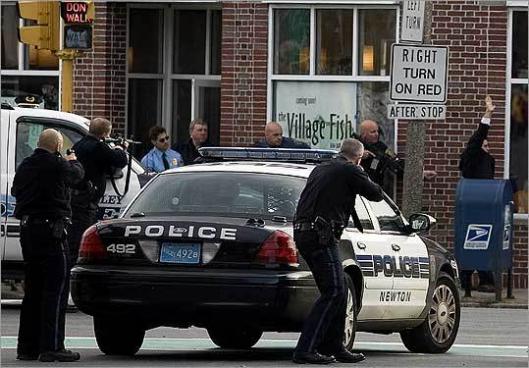 A murder is always a traumatic event for a quiet suburban town like Needham, but technology transformed Friday's tragic killing of a 78-year-old homeowner into a townwide convulsion, during which both the advantages and pitfalls of instant communication were on display.

With a suspected murderer on the loose, an entire town full of children and innocent civilians was alerted, locked down, and finally reassured, all with remarkable speed. At the same time, holes in the system were exposed, mistakes were made, and the heightened state of alert resulted in a televised armed standoff in the middle of Needham Center that turned out to be a case of mistaken identity.

This is the story of 3 1/2 hours that turned a peaceful suburb inside out.

Noon
William B. Dunn, a 41-year-old irrigation contractor from Norwood who had been admitted to a psychiatric hospital three months earlier for making paranoid statements, is installing lawn sprinklers at the Elmwood Road home of Robert Moore, a 78-year-old former Town Meeting member. According to Nor folk County prosecutors, at some point, the two men become involved in an argument. Dunn allegedly grabs a baseball bat and uses it to beat Moore to death in the home's basement. A short time later, the victim's daughter-in-law, Nancy Moore, 46, discovers Dunn apparently trying to clean up the grisly murder scene and is beaten herself, suffering "severe head trauma," prosecutors said.

12:49 p.m.
The first Needham officer arrives on the scene and discovers 20-year-old Chris Moore helping his mother, who identifies Dunn as being her attacker despite her severe injuries. Police also find Robert Moore's body. It is the first murder in Needham in 20 years.

Dunn has fled the scene.

1 p.m.
Nancy Moore is transported to Beth Israel Deaconess Medical Center - Needham, where doctors determine that she will survive.

1:50 p.m.
Unable to quickly locate Dunn, Police Chief Thomas J. Leary calls Needham's superintendent of schools, Daniel Gutekanst, to tell him that officers are searching for a murder suspect on the south side of town.

2:05 p.m.
Taking into consideration that police would be out in force, some searching with K-9 dogs, Gutekanst quickly decides that a lockdown is appropriate.

Administrators begin calling principals at the town's seven public schools to tell them to keep students inside and postpone the end of the school day. Officials at two private schools, St. Joseph and St. Sebastian's, are also urged to lock in their students, which they do.

"It made sense to keep students safe at the school," Gutekanst said later.

2:15 p.m.
Chief Leary calls Town Administrator Kate Fitzpatrick and recommends that the town begin warning the general public. Putting the town's emergency plans into operation will involve the first use of its new Swift911 system, an automated "reverse 911" service that calls town residents and alerts them to ongoing emergencies.

Meanwhile, principals and staff members at the schools begin sending e-mail alerts to parents, informing them of the lockdown and warning that the end of the school day has been postponed. A notice of the lockdown is also placed on the school system's website.

2:35 p.m.
In an apparent mix-up, administrators at the Hillside and Eliot elementary schools - who have been mistakenly informed that the lockdown has been rescinded - release students at the regular time. Meanwhile, parents at the Broadmeadow school begin arriving to pick up their children, but are told that the school is locked down.

Some parents will later complain about not being notified of the lockdown, and that school officials did not explain the reason for it as the parents waited in their cars.

Gutekanst later takes the blame for the miscommunication at Hillside and Eliot, but insists that students were never in danger at the two schools, which are both on the north side of town. One Hillside parent, Clare Palmatier, later defended the school system's overall response to the crisis.

"It was the other end of town, so I didn't think anything of it," she said at Monday's Town Meeting. "I think they handled it well."

2:45 p.m.
Even before officials can fire up the Swift911 system, news of the murder and manhunt has begun to spread throughout the town through word of mouth and radio and television news reports. Some rumors mistakenly describe the murder as a shooting, leading some to believe a gunman is loose.

Word of the situation is further spread by locked-down Needham High School students, who use their cellphones to call and text friends and relatives. This includes a couple of students who have after-school jobs at the Stone Hearth Pizza restaurant in Needham Center. They tell managers at the restaurant that they will be late for work because of the murder manhunt.

2:58 p.m.
The Swift911 system begins to dial approximately 12,000 listed telephone numbers for Needham residences and business, advising people of the manhunt and the school lockdown.

"Please keep all doors and windows secured," the message concludes. "Thank you for your cooperation." The process takes 58 minutes.

Officials later acknowledge that the notification probably had limited effect, because the system contains mostly home telephone numbers and has only about 100 cellular numbers in its database. They say they hope the incident will help publicize the service and convince people to register their cellular numbers through the town's website.

3 p.m.
Spooked by the news of the manhunt, Stone Hearth Pizza workers become alarmed at the behavior of Hillel Neuer, a human-rights advocate from Geneva visiting Boston to give a speech. Neuer orders a pizza and a soda, but keeps getting up from his chair to look out the front window. He also changes his clothes in the bathroom.

3:05 p.m., 3:09 p.m., 3:12 p.m.
The police receive three cellular 911 calls about a suspicious person in Stone Hearth Pizza, including one call mistakenly suggesting that Neuer is armed.

3:07 p.m.
Police officers, many armed with shotguns and assault rifles, surround Stone Hearth Pizza. Within a few minutes, officers have cordoned off the town green and called in a regional SWAT team for assistance.

Nearby streets are cleared, and shopkeepers in the area are urged to close as news helicopters buzz overhead.

A badly frightened Neuer, uncertain about what is happening, hides in the restaurant. He tries to call police on his cellphone, but the call is swamped by the high volume of calls to the town's 911 system.

3:30 p.m.
Neuer finally gets through to a police dispatcher. With at least a dozen guns trained on his every move, he walks out of the restaurant backwards with his hands raised and is handcuffed and taken into custody by Needham police.

A charge of disorderly conduct is later dropped, and his attorney says that the incident has badly traumatized Neuer and damaged his reputation.

"If you think there might be a killer at large, why wouldn't you pick up the phone if someone is acting very strangely?" he says. "I don't think you mess around, given those circumstances."

Meanwhile, investigators are closing in on Dunn about a mile to the south, where a fix on his cellphone signal has led searchers to an area alongside Route 128.

3:45 p.m.
Cirrus, a police dog assigned to State Police Trooper Stephen Barnes, tracks Dunn to a patch of reeds in a marshy area alongside the westbound lanes of Route 128. Barnes directs the dog to subdue Dunn, who is taken into custody.

4 p.m.
The lockdown at the town's schools is lifted and students are released.

Later, at a news conference, Leary says that he has never seen anything like the afternoon's events, and defends his department's actions - including its handling of the pizza restaurant incident - as necessary for public safety.

Asked later for her overall assessment, Town Administrator Fitzpatrick praises the work of police, school officials, and the reverse 911 system.

"This was a terrible murder, a vicious assault, and an intense manhunt," she says. "It was our first use of the system, and I haven't heard any complaints about its performance. The calls went out smoothly."

"I just hope we never have to go through anything like this again."