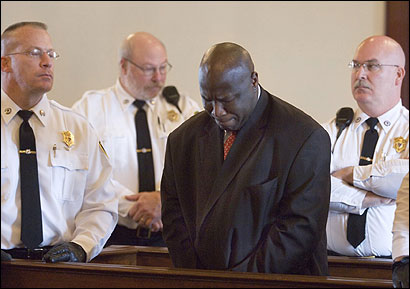 Before live television cameras and a packed courtroom, the panel of seven women and five men found McCowen guilty of murder, aggravated rape, and burglary in one of the most notorious slayings in recent Massachusetts history.

After the proceedings, McCowen's lawyer, Robert A. George, questioned the verdict, speculating that the dismissal of a juror earlier in the week might have been pushed by the prosecution to remove someone sympathetic to his client. But the juror's lawyer rebutted that in an interview last night, saying the juror had not made a decision about McCowen.

Worthington, 46, a world-traveling, Vassar-educated writer, was found stabbed to death in January 2002 in her secluded hilltop bungalow in Truro. Her 2 1/2 -year-old daughter was found clinging to her half-naked body and smeared with blood but was unharmed.

A muscular man, McCowen pursed his lips, shook his head, and wept as the court polled jurors, some of whom also cried. George used the sleeve of his suit jacket to wipe away his client's tears.

McCowen, 34, told police interrogators that he had had consensual sex with Worthington and beat her, but said a friend had killed her, maintaining his innocence. He never took the stand during the trial.

Judge Gary A. Nickerson sentenced McCowen to life in prison without the possibility of parole for first-degree murder and gave him concurrent life sentences for aggravated rape and armed burglary.

"All through this whole trial I sat here and I was thinking to myself, you know, 'Why me?' " McCowen told Nickerson at the sentencing. "Your honor, all that I can say is I'm an innocent man in this case."

He thanked the judge and court officers for what he called respectful treatment during the five-week trial and said he was sorry for the victim and her family.

From his Virginia home, the defendant's father, Roy McCowen, watched the verdict live on television and criticized the replacement of a juror he thought might have been sympathetic to his son.

"We're just trying to hold on," the elder McCowen said by phone last night. "They got rid of the one juror who might have been holding up the rest of the jury, and then all of a sudden 12 of them show up with the same answer. Something just ain't right."

But in a telephone interview last night, J. Drew Segadelli, the lawyer for the dismissed juror, said he understood why observers speculated that his client, Rachel Huffman, was the lone holdout on the jury, given that the panel reached a verdict after she was replaced. But he said Huffman told him she had been one of several jurors who had not made up their mind .

"She was on the bubble, and she was causing serious deliberations," he said. "There were a number, from my understanding, that were undecided."

Huffman, 22, has personal ties to a man arrested in a fatal shooting in Falmouth last weekend. In a tape-recorded conversation between Huffman and Kyle Hicks, 23, who is being held in the Barnstable County Jail, she referred to television coverage of the trial despite the judge's warning to jurors to ignore news accounts. She characterized police investigators in the shooting as "dumb."

After Nickerson dismissed Huffman Tuesday, he ordered the jury, which had deadlocked after five days behind closed doors, to start deliberating from scratch and to reconsider all evidence presented during nearly three weeks of testimony.

McCowen's lawyer theorized that prosecutors had Huffman kicked off the jury because she favored acquittal. George said he wants to speak with her and her boyfriend and obtain the phone records.

"I don't have any proof," George said, "but that's what it smells like."

Cape and Islands District Attorney Michael O'Keefe said the verdict was fair and dismissed George's theory. "I don't think the replacement of one juror had much to do with the outcome," he said.

Huffman did not return phone messages.

Nickerson sentenced McCowen after Mary Worthington, a cousin of Worthington's, read a statement from Amyra Chase, who is rearing Christa's daughter, Ava, now 7.

"This is about a little girl losing her mother in the most heinous way imaginable," said Mary Worthington. "It's about the way Christa Worthington fought for her life and tried to protect her daughter."

With the rest of the jury standing behind him, the jury foreman, who declined to give his name, read a brief statement outside the courthouse saying the panel weighed all the evidence carefully and wanted to go home after delivering the verdict. The judge had sequestered the jury midway through deliberations, a rare move in Massachusetts trials.

Tony Jackett and Tim Arnold, two former lovers of Worthington who had been considered suspects during the 39-month police investigation, said they were pleased their names had been cleared.

"Relief might be an understatement, but at least that," said Jackett, a married shellfish constable, who fathered Ava.

Arnold, a children's author who discovered Worthington's body on a raw Sunday afternoon while returning a borrowed flashlight, said he had dreaded the prospect of having to testify again.

Worthington, who came from a prominent Truro family, was found Jan. 6, 2002, lying on the kitchen floor, dead of a stab wound to the chest. Ava had spent as long as two days near the body.

The murder was the first in Truro in more than 30 years.

It also led to a highly public investigation, including a controversial dragnet in early 2005, when authorities sought to collect DNA samples from all men in Truro.

In April 2005, police charged McCowen, who authorities say barely knew Worthington. McCowen, who had a criminal record and was the subject of at least four restraining orders by women on the Cape, picked up trash weekly from Worthington's house.

McCowen agreed to give police a DNA sample three months after Worthington's killing. But police did not collect his DNA until two years later, and then it took more than a year to match the sample with DNA from Worthington's body. O'Keefe attributed the delays to several factors, including investigators' focus on other suspects and a lack of resources at the State Police crime lab.

At trial, Welsh presented testimony from investigators who said McCowen initially denied knowing Worthington during a six-hour police interview. But after being confronted with DNA evidence, police said, McCowen said he and Worthington had consensual sex and then got into a fight.

In the untaped interview, McCowen said that he punched Worthington in the face, stomped on her, and wiped down her body after she died, investigators said. But he never admitted killing Worthington, police said, and said Jeremy Frazier, a friend who had accompanied him to her house, was the killer.

On the stand, Frazier denied having anything to do with the slaying of Worthington.

George contended that his client was the victim of desperate detectives who bungled the investigation and then manipulated evidence to fit the theory that McCowen stabbed Worthington after drinking on a Friday night. He said racial prejudice also entered into the equation because authorities assumed Worthington would not have consented to sex with an uneducated, black trash collector. Two of the 12 jurors were African-American.

George also argued that Worthington was alive and well Saturday morning until someone else, a white man driving a dark car, killed her. He said police failed to investigate a report by an eyewitness who said he saw a man in a dark automobile speed away from Worthington's driveway the day before her body was discovered.

But Welsh said that race had nothing to do with the crime and that McCowen was "completely indifferent to [Worthington's] suffering."

After the sentencing, Welsh praised police investigators and the jury. "I am very happy we were able to get justice for the Worthington family, and not just for the family, but for Christa and little Ava," he said.