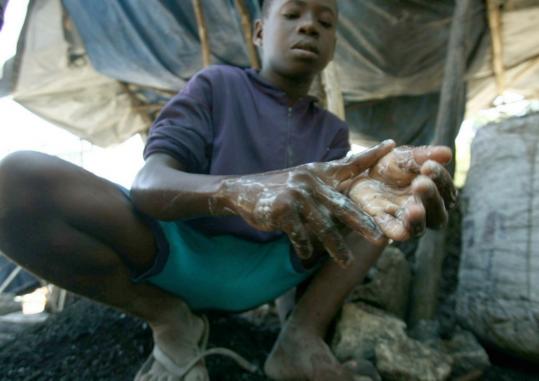 A boy in Bois Moquette, Haiti, washed with soap to help prevent the spread of cholera. The Pan American Health Organization predicts that 200,000 Haitians will show signs of the disease. (Hector Retamal/AFP/Getty Images)
By William Booth Washington Post / November 21, 2010

PORT-AU-PRINCE, Haiti — The difference between life and death in Haiti is now an ordinary bar of soap.

Soap could slow the terrifying cholera outbreak that is quickly spreading and has entered the ravaged capital, according to health care specialists and international aid groups.

But in the squalid slums of Port-au-Prince and the river towns where the cholera outbreak began three weeks ago, many Haitians held up their hands and shook their heads, saying they had no soap to stop an infection that is spread by contaminated food and water and where a vigorous hand-washing, especially after using the toilet, is the number one way to save lives.

A cake of yellow Haitian soap costs about 50 cents. But many Haitians do not have soap because they cannot afford it. More than half the population lives on less than $1.25 a day.

“They buy food instead,’’ said Gaelle Fohr, a coordinator for hygiene programs in Haiti for the UN Children’s Fund.

“We borrow, we buy, but right now, we don’t have any soap in the house, I am sorry to say,’’ said Joceline Jeune, living with three children in a hillside shanty at the edge of a displaced persons camp, as a gutter filled with greasy, gray water flowed inches from her front door.

“As hard as it is to believe, Haiti still needs soap. They have many needs, but soap — and access to clean water — is absolutely essential to fight cholera,’’ Nigel Fisher, the top UN humanitarian aid coordinator, said in an interview.

There are plans for more water trucks, and more chlorine in water tanks, wells, and distribution points. But building a modern water and sanitation system will take years. By contrast, experts say, soap is fast and doable, allowing people to clean their hands.

Foreign governments, international aid groups, and individuals have sent more than $3.4 billion in humanitarian aid here in the 10 months since a tremendous 7.0 magnitude earthquake struck the capital, killing about 300,000 people and displacing more than 1.5 million, according to the Haitian government. But poverty is so deep, needs can seem bottomless.

“Haiti has crowded slums, poor hygiene, incredible poverty — before and after the earthquake. This is an extremely contagious, extremely virulent strain,’’ Fisher said. “It can kill in a few hours — unless you get help. We have well over a million people in camps; we have a disease that spreads by hand, mouth, touch, water. It can lie dormant for five days. You cannot tell who is infected. The country is now facing a tremendous challenge with limited resources.’’

Experts at the Pan American Health Organization forecast that 200,000 Haitians will show signs of the disease, while it is possible that 1 million will be infected but remain asymptomatic carriers still capable of spreading the potentially deadly bacteria.

The United Nations has appealed for $164 million in emergency funds to fight cholera in Haiti. The organization plans to spend more than half the money on clean water, basic sanitation, and improved hygiene, and far less on treating the sick, because of the relative cost and importance of prevention. Epidemiologists anticipate that the epidemic will continue to spread, and cases will appear in bursts of sudden outbreaks over the next six months.

“For the people who live in the hills, it is a two-hour walk to the road, where they can catch a tap-tap [a bus], and some of them have already been sick for two or three days, and they have to be carried to that road,’’ said Heather Lorenzen of the International Medical Corps as she was erecting tents to serve as a cholera treatment center in Gonaives in the Artibonite valley.

Across the street, workers in yellow gloves and protective masks were scouring the floors and walls of the main hospital that had been overwhelmed by cholera patients. The illness can produce diarrhea and vomiting, and patients die not of the toxin that the cholera bacteria produces but of dehydration.

In the past two weeks, international aid groups have been scrambling to deliver soap and hygiene kits to some of the millions still living in tarp and tent camps in the capital and to the most vulnerable populations in the countryside.

UNICEF brought 100,000 pieces of soap to 500 of the country’s orphanages. Along the Artibonite River valley, the group distributed 82,000 bars. It will be heading to 5,000 schools in coming weeks.

Another group, Clean the World, has distributed 100,000 bars of used soap it collected from 550 North American hotels that recycle the bars instead of throwing them away after one use by a guest.

But shortages abound — not only of soap, but also of bleach, intravenous fluids, powdered rehydration solutions, and doctors and nurses trained in treating cholera.

Haiti had not had an outbreak in more than 50 years.