S. Boston cluster may be genetic, not environmental, but true cause is elusive 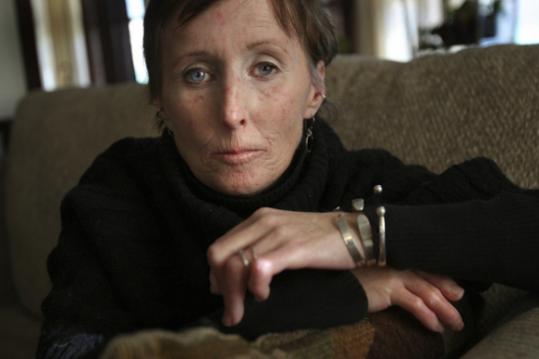 Elizabeth Lombard is among the residents of South Boston who has scleroderma, the autoimmune disease that hardens muscles and internal organs. (Suzanne Kreiter/ Globe Staff)
By Meghan Irons Globe Staff / January 25, 2010

Elizabeth Lombard’s right hand is stiff and wooden, unable to flex or move.

“It won’t bend,’’ she said, displaying the tightened skin that is pulling back her fingers into a crooked and clawlike form.

Lombard has scleroderma, a rare, life-threatening autoimmune disease that hardens muscles and internal organs, and causes the body’s immune system to attack itself.

The disease, which has no cure, has long confounded South Boston, where a cluster of longtime residents from the City Point section - most of them middle-aged women - were falling ill with it. The residents, who lived near a power plant and hazardous waste sites, believed they were victims of their environment.

Their case gained national media attention and sparked an 11-year investigation by the Massachusetts Department of Public Health. In their findings, released earlier this month, state researchers acknowledged “higher than expected cases’’ of scleroderma in South Boston, a neighborhood of roughly 30,000 people.

But it determined that genetics, not the environment, played a significant role.

“It’s not necessarily that the community they were living in was producing this disease,’’ said Robert Simms, the chief of rheumatology at Boston Medical Center and a researcher in the study. “When you look at the data, it does not support that.’’

Researchers also said low participation in the $1.75 million study may have limited their ability to find an environmental link.

Without a large enough sample, Simms said, it was difficult for scientists to gather reliable estimates on scleroderma’s link to the residents’ proximity to toxic wastes and other pollutants.

“Those are the things the South Boston study tried to do and came up short,’’ said Simms, who added that the study now opens the door for much larger, national research.

The study found that people with a family history of specific autoimmune-rheumatic diseases, such as rheumatoid arthritis, Raynaud’s disease, lupus, and thyroid disease, were more likely to develop scleroderma.

For the women afflicted with the disfiguring disease, the findings have come as a bitter disappointment.

“I thought that if we had an answer then we could fix it,’’ said Lombard, whose eyebrows have fallen out and whose face is tight and covered with red blotches. “It would help us make sense of why so many of my neighbors have this horrible disease.’’

Ann Dilorati Macaulay, another woman with scleroderma, recalled being slick with oil after swimming in the bay and seeing soot raining down from the oil-burning former power plant, blackening residents’ clothing and backyard laundry. The plant now uses natural gas.

“I still believe that there is something in the environment that is causing this,’’ Macaulay said. “I do think there is a genetic component, but when we are exposed to it, it triggers the disease.’’

For years, residents have been raising the issue of South Boston’s troubling history with pollution - streets that glistened with chemicals when it rained, fumes from planes heading to Logan, the smell from smokestacks not far away.

“I believe there is a cumulative effect,’’ said Mary Cooney, a South Boston activist who has been working with the state on the study. “If these women had grown up in West Roxbury or Hyde Park, they would not have gotten the disease.’’

Macaulay and Lombard were Fourth Street neighbors who found out they had the disease in the late 1990s. Back then, word spread in the tight-knit community. Names began surfacing about others who lived nearby who also had the disease.

Figuring it was not a coincidence, Lombard wrote a letter to the state seeking a review.

“Longtime residents, even if we had no proof, we were always suspicious about how this little tiny community can have all these people with this rare disease,’’ Lombard said.

In the study, researchers collected information about participants’ residential, occupational, and family medical histories. They checked for possible exposures to pollution, including hazardous waste sites and a Coastal Oil refinery.

Researchers tried to recruit large numbers of people for the study, but ended up with 41 people who have the disease and 219 randomly selected individuals who did not have it.

Such a small sample, though it suggested no link to the environment, was not large enough to draw hard conclusions, Simms said.

“The trouble is that science isn’t perfect,’’ said Simms. “It can’t always give the emotional validation that they are seeking.’’

More studies in the immediate future appear unlikely, though state researchers are encouraging present and past South Boston residents with scleroderma or lupus to participate in a national registry designed to identify a genetic link.

At her home in North Attleborough, Macaulay, with a physical therapist aiding her, lifted a resistance band over her head to exercise her arms. She is not convinced by the results.

The study may be over for South Boston, she said, but the battle to understand scleroderma has not.

“South Boston is very polluted,’’ she said. “I think [this disease is] still going to keep happening.’’