For seniors who give up driving, the emotional - and physical - costs of surrendering independence can be high 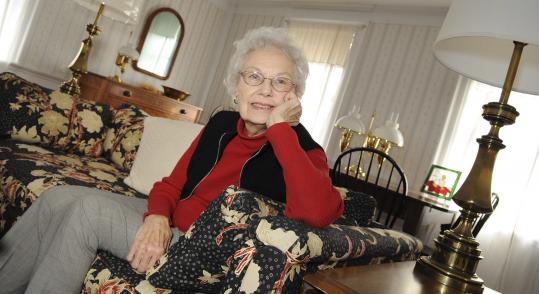 “Not being able to drive also limits my volunteering, and I would like to still feel useful,’’ says June Casler, an octogenarian in Marblehead. She searches for alternative transportation when her community’s Council on Aging van isn’t available. (Lisa Poole for The Boston Globe)
By Kay Lazar Globe Staff / December 21, 2009

It’s the spur-of-the-moment trips that June Casler misses most, the spontaneous decision to catch a 7 p.m. movie or to pick up a coveted book at the library. The octogenarian hung up her car keys for good when she moved from western New York to Marblehead in June because she felt that negotiating busy, unfamiliar streets could be distracting and dangerous.

Casler has since discovered that the local Council on Aging van doesn’t run nights or weekends and requires 24-hour advance notice. She doesn’t want to burden her son and daughter-in-law, who live nearby, for rides during the van’s off hours. But neither does she want to end up like one of her 90-year-old friends who could barely see but was still behind the wheel - until her family called police to intercede.

Driving, or more precisely, deciding when to surrender the keys and license, has become the third rail of aging. A spate of car accidents involving elderly drivers in Massachusetts earlier this year prompted proposals for mandatory testing after age 75. Yet the emotionally charged debate, here and around the country, has largely ignored the rest of the equation: Then what?

When elders give up driving, a cascade of physical, emotional, and practical concerns often follow. There is an increased risk of depression, isolation, and even, studies suggest, of ending up in assisted living.

Casler is starting to understand the stakes.

“There is this feeling of independence that’s gone,’’ she said. “Not being able to drive also limits my volunteering, and I would like to still feel useful.’’

A 2006 study of roughly 1,600 seniors over age 65 in suburban Maryland found that those who had given up driving were nearly five times more likely to end up in long-term care after eight years than those who were still driving, even when researchers accounted for various health problems. They found that the seniors who had depended on another driver in the home and lost that support were nearly twice as likely to go into long-term care, as compared with elders who were still driving.

The researchers did not study the reasons for the strong link, but coauthor Ellen Freeman, an assistant research professor in ophthalmology at the University of Montreal, said lack of transportation is a likely culprit.

“My mom’s parents grew up in rural Ohio, and one of their main reasons for going into assisted living was the fact that my grandfather couldn’t drive anymore,’’ Freeman said. “They also had health problems, but being unable to drive was the tipping point.’’

As increasing numbers of baby boomers face the driving dilemma with their elderly parents - a scenario that will become far more common as boomers themselves age - there is growing urgency to establish more comprehensive transportation alternatives that will mesh with the needs of a generation used to life on its own terms.

That’s the thinking behind the Independent Transportation Network, a 24-hour driving service run by volunteers, which started in Maine’s greater Portland area and has spread to communities in 10 other states, though not yet any in Massachusetts.

It works like this: Seniors who surrender their car to the network get the equivalent of the vehicle’s value in free rides, or they can join without the trade-in, and pay by the ride. The average fee is about half of what a taxi would charge for the same route, because the networks usually raise private funds from area businesses to subsidize the full costs. Passengers who schedule rides in advance are given discounts. Volunteer drivers can bank future rides for themselves or a family member.

“We have done about 280,000 rides nationally,’’ said Katherine Freund, who started the network in 1995, seven years after her 3-year-old son was seriously injured by an elderly driver.

After that accident, Freund said she started studying the issues surrounding elderly drivers, such as declines in eyesight, hearing, and reaction times. Initially she thought there should be a requirement that older motorists be tested to maintain a license. But after further scrutiny, she said she decided a more pragmatic approach to getting elders from behind the wheel would be to offer an alternative that most closely resembles “the emotional and psychological freedom of cars for older people.’’

It takes about $125,000 to start a network, which goes toward a minimal staff, office space, and equipment and maintenance on the vehicles, Freund said. After start-up costs, the programs are usually self-sustaining within five years, she said, but many also often require a change in state law, to prevent auto insurers from raising premiums for volunteers who use their own autos.

The idea has so intrigued Representative Ronald Mariano, a Quincy Democrat who faced a driving “battle’’ with his own dad several years ago, that he invited Freund to Boston this month to find out more about the network.

“We want to see if this model can translate to life in Massachusetts,’’ Mariano said. “We can’t afford to put any money into a new program and so we are always looking for creative ways that are low or no cost to the Commonwealth.’’

Despite the impending avalanche of aging drivers - roughly one in four will be 65 or older by 2025 - many local, regional, and state agencies are failing to include alternatives to automobilies in their planning, says the AARP’s Elinor Ginzler, senior vice president of the organization’s livable communities initiative.

“After people stop driving, the first thing they do is become a passenger in someone else’s car, and after being a passenger, the next most prevalent way for people to get where they want to go is to walk,’’ Ginzler said. “But the reality is, the walking environment is often a very hostile one.’’

A recent AARP national survey found, for instance, that nearly half of adults age 50 and over said they couldn’t cross main roads near their homes because it was unsafe. And half of those people said they would walk, bicycle, or take the bus more if the roads were safer to cross. Another AARP study of more than 1,000 transportation planners and engineers showed that nearly two-thirds of those surveyed had not yet begun considering the needs of older adults in their project planning.

Much is at stake for elders who decide - or have someone else decide for them - to hang up the car keys.

Some studies, most notably by geriatrician Richard Marottoli, an associate professor of medicine at Yale University Medical School, have found an increase in depression and a drop in out-of-home activity levels among older adults after they surrender their license.

“One of the reasons people don’t want to stop driving, and physicians are reluctant to get involved in the process, is because they know there are negative consequences,’’ Marottoli said.

Which is why Casler, the Marblehead transplant who doesn’t want to burden her son, is determined to keep searching for alternative transportation when the Council on Aging van is not running.

“I checked taxis and they said to go anyplace in Marblehead is $10,’’ Casler said. “To some people that won’t seem like much, but to me it is.’’