Health plan’s effect on costs may be slight

Many steps are incremental 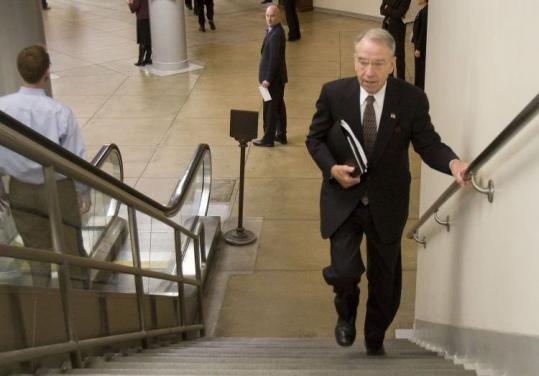 Charles Grassley is the ranking Republican on the Senate Finance Committee, which will vote on the health care bill. (Harry Hamburg/ Associated Press)
By Lisa Wangsness Globe Staff / October 12, 2009

The bills under construction, which will be the focus of congressional attention this week, include many incremental or slowly phased-in programs designed to eliminate waste and reward quality and efficiency. But they stop short of such bold cost-cutting moves as aggressively overhauling the way care is organized and doctors and hospitals are paid, or investing intensively in finding the best treatments for diseases and tying the results to reimbursements. Nor do they give people with employer-sponsored insurance the chance to comparison-shop for the best insurance deals and pocket any savings.

“I think there are some valuable steps being taken to position us in the future for cost containment,’’ said Paul Ginsburg, president of the Center for Studying Health System Change. “But there is nothing that is clearly going to be a powerful force for slowing the cost trends.’’

One reason for this: Lawmakers are afraid of offending powerful industries or angering voters. Take last summer’s furor over “death panels.’’ Senators jettisoned a proposal to pay doctors for counseling Medicare patients about end-of-life care - an effort to curtail futile, expensive overtreatment of the terminally ill - after conservatives accused them of trying to kill off seniors.

“The Republicans are clearly poised to look at every loser of health reform and exploit their anger for political reasons,’’ said Uwe Reinhardt, an economist at Princeton University who said the proposed legislation “really doesn’t address the issue’’ of cost containment, though the bill takes important initial steps.

Democrats, who have traditionally depended on trial lawyers for political donations, have also shied away from protecting doctors from frivolous lawsuits if they adhere to safety standards and treatment protocols. The Obama administration is inviting states to experiment with ways to reduce medical injuries and liability premiums, but the nonpartisan Congressional Budget Office said Friday that a more comprehensive overhaul could save $54 billion over 10 years.

Another daunting roadblock to lowering costs is disagreement over how to impose major structural changes on the health economy. No one knows precisely how to fix the problems that lead to runaway costs, and even if solutions become apparent, they would take years to implement.

Most health economists believe the financial incentives for doctors and hospitals must be changed to reward them for providing good care, not merely as much care as possible. One way to do this may be to create “accountable care organizations,’’ where clinics, hospitals, and other providers develop a network delivering high-quality but efficient care - but no one knows exactly how to entice providers to reorganize. So Congress is experimenting.

“The truthful answer is, we’re trying things out,’’ said Henry J. Aaron, a health economist at the Brookings Institution. “When exactly the [cost] curve gets bent and how far it bends eventually is something no responsible person can give a hard answer to today.’’

Distinguishing political obstacles from technical ones is not easy. Massachusetts leaders understand this: They recently proposed quickly implementing a radically new system for paying doctors and hospitals. Hospital leaders warn the changes could “kill the industry’’ - but they also stand to lose money, so critics question their credibility on the issue.

Stuart Altman, an economist at Brandeis University, noted that Massachusetts policy makers in 2006 decided to get everyone insured first and then attack the more challenging issue of cost. Congress seems to be doing the same, he said, and wisely so.

“I’m convinced there is going to have to be a follow-on [bill], like in Massachusetts, dealing with health care costs,’’ he said.

But Gail Wilensky, who ran Medicare in the early 1990s, believes the time to act is now. The Senate Finance bill is still too “timid and tepid’’ in not requiring successful Medicare experiments in doctor payment and health care organization to be nationalized quickly, she said.

“I’m just disappointed it’s not more aggressive,’’ she said, “because it’s a very hard problem and it will take years to solve.’’

The Finance Committee bill is the only proposal that would reduce the deficit and slow federal health spending. In addition to testing payment and organizational reforms, it would begin tying a percentage of Medicare payments to quality measures and, gradually, to cost-effectiveness. Hospitals would eventually lose money for avoidable readmissions and infections.

A new Medicare Commission would recommend changes to improve the program’s efficiency that would become law unless blocked by Congress.

The proposal would tax insurers 40 percent on high-cost insurance policies - a more politically savvy variant on limiting the tax break the United States offers on employer-sponsored insurance, a move economists widely agree would hold down costs.

“In terms of slowing the skyrocketing health care spending in both the private and public sectors, the Finance Committee bill is the boldest, fastest and most aggressive of all the health reform proposals in Congress,’’ Erin Shields, spokeswoman for Senator Max Baucus, the panel’s chairman, wrote in an e-mail.

Len Nichols, a health economist for New America Foundation, said perfection is unrealistic, but the plan not only begins most of the necessary work toward bending the cost curve but also sends a clear, strong signal to the medical industry about how financial incentives will change.

“The whole world that is built around ‘I can sell them whatever I want and charge them for every little thing’ - that world is coming to an end,’’ he said.

But some economists yearn for more dramatic action, like allowing people to use their employers’ premium contributions to buy a policy on the open market, pocketing any savings. New rules would prevent insurers from offering cheap but shoddy policies.

Alain Enthoven, a professor of management at Stanford University, said similarly structured state employee plans in California have shown that employees use their power to demand low-cost, high-quality managed care, and large contracts keep administrative costs low. But lawmakers fear this approach would dismantle the employer-based system and rejected it.

For now, cost controllers are pinning their hopes on taxing high-cost insurance. But unions and a huge contingent of House Democrats hate the idea, since many union workers have sacrificed raises to keep good benefits. But it may survive, since it is key to paying for coverage expansion. It would grow at the pace of medical inflation; the House Democrats’ income tax surcharge would not.

Robert Moffit, an economist at the Heritage Foundation, said the tax is not nearly as effective as limiting income tax breaks on insurance, combined with the open-market idea.

“It doesn’t restructure the tax code in such a way where you have this robust, consumer-driven system,’’ he said.