Testosterone was once off limits for men with prostate cancer. Things are changing. 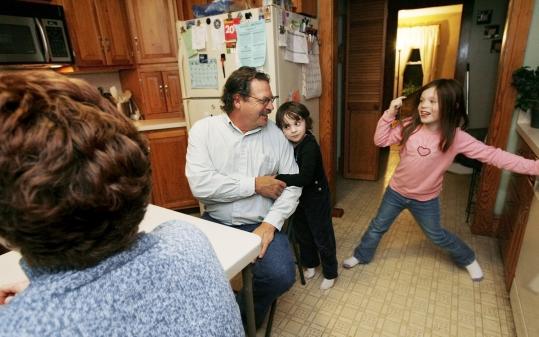 Steve Drouin and his wife, Jean, with their grandchildren, Rebecca Wilson, 4 (middle), and Jenna Wilson, 7, at home in Northfield, N.H. (Cheryl Senter for the Boston Globe)
By Judy Foreman January 5, 2009
Text size – +

Manny Hamelburg, 68, a retired businessman from Holbrook, had fought prostate cancer for years. First he tried radiation, then a drug with side effects that nearly killed him, and finally Lupron, a drug that blocks production of testosterone, the hormone that can fuel prostate cancer.

The cancer disappeared. But life was miserable. Without normal levels of testosterone, Hamelburg said he had no energy, and "zero libido for seven years. I was like a eunuch. I was chemically castrated. Sex was just hugs."

So three years ago, with his cancer undetectable and his oncologist and urologist cautiously on board, Hamelburg made a decision that many doctors consider anathema: He took testosterone supplements.

So far, says Hamelburg, "The cancer hasn't come back, but my libido has, my sense of being alive. It's like a fog cleared. It's being aware of things, being more vibrant."

For decades, the idea of giving testosterone to a man who had had prostate cancer was forbidden - "verboten" in the words of Hamelburg's urologist, Dr. Abraham Morgentaler of Beth Israel Deaconess Medical Center.

"It would have been considered heresy, or malpractice," says Morgentaler.

But that thinking is changing, due in part to Morgentaler, and his new book, "Testosterone for Life." Morgentaler argues that, while depriving tumors of testosterone does make them shrink, other evidence is beginning to suggest that it may be safe to give testosterone to men who have been successfully treated for prostate cancer, and appear to be cancer free.

One revolutionary aspect of Morgentaler's theory is the observation that prostate cancer is often found in men with low testosterone levels, not high ones, underscoring the idea that taking it may not be an added risk.

It's not surprising that Morgentaler - who has received honoraria and research funding from companies selling testosterone-related products - has generated controversy with his ideas.

"To say that testosterone replacement therapy is safe because we have no evidence it's harmful is making an assertion on faith, not facts," said Dr. Ian Thompson, chairman of the department of urology at the University of Texas Health Science Center at San Antonio, echoing the view of other doctors who disagree with Morgentaler.

But amid often-confusing testosterone research results, there are hints that Morgentaler and like-minded physicians may be on to something. In the test tube, prostate cancer cells have been shown to grow faster when testosterone is added, but only up to a point. Then the growth plateaus, even if more testosterone is added.

In 2006, Morgentaler cowrote a study on 345 men with low testosterone. The study - published in the journal Urology and not industry funded - showed prostate cancer risk was higher in men with the lowest testosterone, a finding supported by a handful of other small-scale studies using human subjects. That was contrary to findings suggested by the Physicians' Health Study in 1996, a discrepancy doctors can not fully explain.

And last February, an analysis of data from 18 studies around the world involving nearly 4,000 men with prostate cancer, and more than 6,000 without, showed no correlation between high testosterone levels and cancer risk. The study was published in the Journal of the National Cancer Institute.

Understanding the pros and cons of testosterone replacement is not easy.

But there are also risks, in large part because many seemingly healthy men have undetected prostate cancer, which could be stimulated by taking testosterone. Indeed, studies suggest prostate cancer is lurking in as many as 25 percent or more of men 50 and older.

Only when a man has a "clean" biopsy - an invasive procedure in which snippets of the prostate are surgically removed and tested - can a doctor confidently say the man doesn't have cancer.

As an extra measure of safety, Morgentaler says he biopsies men over 50 before he prescribes testosterone for them. But most doctors don't, says Dr. Marc Garnick, a cancer specialist at Beth Israel Deaconess Medical Center and editor in chief of Harvard Medical School's publication, Perspectives on Prostate Disease.

Even with apparently healthy men, "Nobody has proven that it is completely safe" to give testosterone," says Dr. Philip Kantoff, head of the Prostate Cancer Program at Dana-Farber Cancer Institute.

The traditional recommendations are to steer clear of testosterone supplementation if you have prostate or breast cancer; or if you meet one of several criteria: your physician can feel a nodule on the prostate during a digital rectal exam; your PSA (a marker of potential cancer) score is higher than 3 nanograms per deciliter; your hematocrit (red blood cell count) is greater than 50 percent; you have untreated sleep apnea, severe urinary tract symptoms or heart failure.

These standards are set by the Endocrine Society, a professional group of doctors who study and treat patients with hormones.

And if you have had prostate cancer that appears to be gone?

But if you do wish to explore testosterone supplements, it's smart, given the controversy, to get a second opinion. Grill your doctors on how serious your prostate cancer was to start with - that is, how high your PSA was, and how many gland segments contained cancer. Also, keep being monitored for cancer recurrence.

Hamelburg is glad he eventually opted for testosterone. "My body was my enemy," he says. "Now, I just feel like a man again."

Steve Drouin, 56, a mason in Northfield, N.H., who has also had prostate cancer, echoes that view. "He's not tired all the time," says his wife, Jean. And has their sex life improved? "Yeah," she says. "It has."