A marriage proposal inside a crossword puzzle yields the correct answer: Yes! 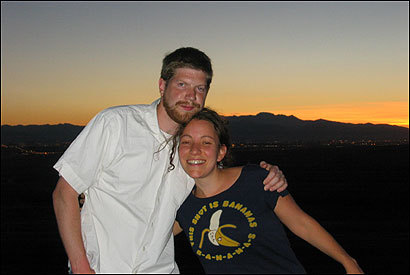 The clue for 111 across in yesterday’s Boston Globe Sunday magazine crossword puzzle was “Generic Proposal.” The answer (spoiler alert, for those still working on it!) was “Will you marry me?”

Most puzzle devotees no doubt just moved on to the next clue when they solved that one. But for Aric Egmont of Cambridge, those 14 letters on the grid were the actual proposal he’d been plotting for months to his girlfriend, Jennie Bass.

Egmont, 29, who works in the communications department at Fidelity Investments, contacted the magazine this summer to ask if the people who create the puzzles would be willing to write a special one for him. Sunday mornings for he and Bass, he said, have always included tackling the Globe magazine crossword, a tradition that started early in their relationship.

“On our fourth date, I knew I had found the kind of dork I could love,” Egmont wrote in a note to the magazine. “We had already had some more adventurous outings. But on our fourth date we just went to the local coffee shop and did the crossword. That date was the first moment when we stopped relying on some kind of event to set the agenda, and instead we took that first tiny step towards normalcy, spending time together doing the same things we would regularly do on our own.”

Emily Cox and Henry Rathvon, a married puzzle-writing team who have been writing Globe magazine crossword puzzles for years, accepted Egmont’s challenge. Their puzzle was titled “Popping the question,” and each theme entry was a variation on proposals. For example, “Macrame artist’s proposal” was “Let’s tie the knot.”

The tricky part for them was writing an entire puzzle, including an official proposal, that would be clear to the happy couple, but not obscure to all the other puzzle-doers out there. Hence, 111 across: “Generic proposal” (Jen + Aric = generic).

Egmont said Saturday night was a restless one.

“I am waking up through the night, a little nervous,” he said Monday morning. “Finally, Sunday morning, I was like, ‘Do you want to do the crossword?’ I grab the paper and we start doing it. There are clues that have personal significance, my last name, her best friend’s name. She’s not suspicious at all. Her sister’s name is in there. She’s like, ‘This is so bizarre.’ She just thinks it’s an amazing coincidence.”

“I was just like, wow, all these amazing coincidences, special places and people in my life,” said Bass, 29, who is studying food policy and public health at Tufts School of Medicine. “It was just really exciting to do it. There was no reason for me to suspect it. Then he got up and came back with a box and it was pure elation.”