Ringing in the year with orchestral chestnuts 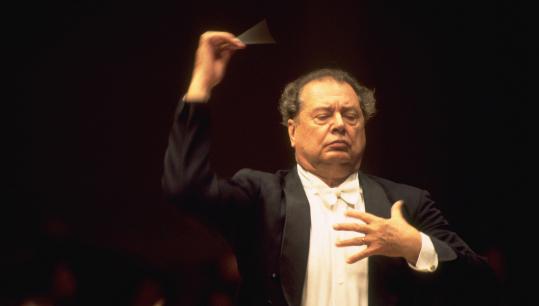 Like the students, most of the city's concert scene is still on winter break but the Boston Symphony Orchestra is back from holiday this week. Sort of. Last night's concert in Symphony Hall still had a holiday vibe. It was the shortest BSO program of the season and was full of a kind of orchestral party music, led by the ever-returning guest conductor Rafael Frühbeck de Burgos. You might call it, in the marketing parlance of New York's Symphony Space, wall-to-wall warhorses. More specifically, the BSO played two Strauss tone poems - "Don Juan" and "Till Eulenspiegel's Merry Pranks" - and Mussorgsky's "Pictures at an Exhibition" in the classic Ravel orchestration.

For some subscribers this kind of programming spells bliss; for others, it seems to spell pass, as there were many empty seats in the hall last night. I definitely find it more effective to hear these cornerstones of the orchestral literature when they are not stacked unimaginatively on top of each other. Even so "Don Juan," no matter how many times you've heard it, is a work that always grabs you by the lapel. This anarchic tone poem was the brilliant piece through which the 24-year-old Strauss brashly announced himself to the world in 1889.

The music, full of sudden jump cuts, conveys both the intensity of the Don's amorous adventures and his cool amorality. The best conductors can find ways to bring out fresh and radical elements of even the most familiar scores but this was not the case last night. Frühbeck led the entire evening from memory, drawing playing that was sturdy and at times forcefully muscular but his accounts seldom coalesced into inspired interpretation. "Don Juan" was stronger in its sweep than in its clarity or precision of details. Ditto for "Till Eulenspiegel."

"Pictures at an Exhibition" is of course one of the best-loved orchestral showpieces in the repertoire, and it duly showed off the orchestra to fine effect, especially the winds and brass. Thomas Rolfs's recurring trumpet solos were bright, clear, and ringing; Ken Radnofsky played the saxophone solos with an admirably warm and delicately inflected tone. The lower strings gave "Gnomus" the desired earthy heft. But Frühbeck's tempo choices often seemed curiously idiosyncratic or else simply slow. "The Great Gate of Kiev" built to an impressive volume and breadth but it lacked the visceral charge and electricity this orchestra is surely capable of delivering.

The BSO's holiday vibe extends into next week too, as Frühbeck will return with another Strauss tone poem and Rachmaninoff's popular Second Piano Concerto. That program's not-so-secret weapon should be Norwegian pianist Leif Ove Andsnes as soloist.