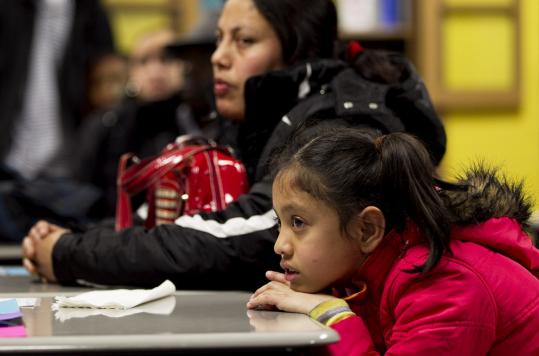 Seven-year-old Diya Thapa and her mother, Meera Basnet Thapa, waited for Diya’s name to be called during a lottery at the Edward W. Brooke Charter School last week. The Thapas were among hundreds of Boston families that awaited lottery results at charter schools in the city. (Yoon S. Byun/ Globe Staff)
By Lawrence Harmon Globe Columnist / March 13, 2011

“NO CHILD’S chance in life should be determined by the luck of a lottery,’’ President Obama said during his visit last week to a highly chosen high school in Dorchester. But quality education in Boston remains every bit a crapshoot.

On Wednesday night, scores of lottery hopefuls crowded into the library of the poorly performing Gavin Middle School in South Boston. It will soon be taken over by Unlocking Potential, a nonprofit charter school management organization that specializes in resuscitating failed schools. About 700 Boston families entered the lottery for 162 sixth-grade seats at the South Boston school, which will be christened UP Academy in August. Those odds made for a lot of long faces in the school’s library. But none longer than that of 11-year-old Josie Amado of Dorchester, who loves math and can use “standard algorithm’’ correctly in a sentence.

She came early with her mother and younger brother to get a good seat up front. But her name wasn’t among the first 162 called. “Waiting list, waiting list,’’ she prayed quietly. But hers wasn’t among the next 94 names called for the wait list, either. Still, she stayed glued to her chair until her mother, Rosa Monteiro, had to pry her away.

“We’ll try for METCO,’’ said Monteiro, referring to a program that offers scattered seats in suburban schools for minority students in Boston. It will be one lucky suburb that gets this girl.

Education-minded families flocked to at least 15 other charter school lotteries on the same night. Parents want the kind of flexibility in scheduling, curriculum, hiring, and firing that charter schools provide. Critics complain that charter schools attract the best students, leaving special-needs students and non-native English speakers behind. But Unlocking Potential is determined to put that argument to rest. Staffers fanned out in recent weeks with the address list of current students at the Gavin school, determined to convince them to return in the fall. Some of the children weren’t too enthusiastic about the prospect of 8-hour school days and mandatory uniforms. But their parents were. A stunning 91 percent of families chose to reenroll.

“The critics can’t argue selection bias,’’ said Scott Given, founder of Unlocking Potential. In 2005, Given took over the failing Excel Academy Charter School in East Boston. Three years later, it was the top scorer in the state on the MCAS exam.

Charter schools mostly operate free of teachers’ unions and their picayune grievances. But UP Academy is an unusual hybrid approved in November by the Boston School Committee. The teachers in this 450-student, in-district charter school will be members of the Boston Teachers Union, and classes will be held in a city-owned school building. But that’s where the similarities end.

Teachers will not be paid extra for working significantly longer than the traditional 6 1/2-hour school day called for in their contract. But they can earn merit pay. The school will use its own teacher evaluation system, which will be stricter than the one now in use in Boston.

Given said it is unlikely that even a single veteran teacher at the Gavin will be rehired at UP Academy come fall. It is likely instead that at least half of the 40 teachers at UP Academy will have connections to Teach for America, a program that places top-notch college graduates in urban and rural classrooms for two years. After flying around the country to see his prospects in the classroom, Given said he is not even remotely concerned that they will be too green.

“I believe a teacher can be phenomenal in the third year,’’ he said.

Training sessions in August will focus on what UP Academy expects of its teachers and what they must expect from their students. On the first day of school, said Given, students “will look at our staff and think we’ve known each other for 20 years.’’

There’s a lot at stake in the takeover of the Gavin by UP Academy. If it succeeds at raising student achievement with an identical student population, then the main complaint of charter school critics will lose its resonance. If relatively inexperienced teachers can do what veterans can’t — namely turn around a school where only one out of four students performs at grade level — then the public cry for longer school days, merit pay, and stricter teacher evaluations will grow louder.

One outcome would be best of all. If UP Academy inspires the creation of more like it, then bright kids like Josie Amado will not have to depend on dumb luck when they come of middle-school age.