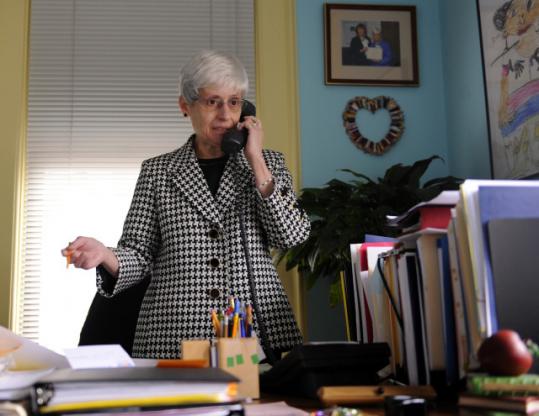 CENTRAL FALLS, R.I. - Inside the front door to Central Falls High School, across the street from a boarded-up building, an archway is adorned with an unambiguous boast: “Through these halls pass the world’s best faculty and students.’’

It is a motto that rings false for the local school board, which recently voted to fire all of the school’s staff in a stunning move that made Central Falls a lightning rod in the polarizing debate over improving the country’s education system.

Even President Obama weighed in, holding up the Feb. 23 vote to fire all 93 teachers, administrators, and support staff as a painful but potentially necessary move.

“It was one thing when a rival town said something bad about your school,’’ said JoAnn Boss, a Spanish teacher at Central Falls High and a 1982 graduate. “But to have the president say something, it’s really been a crushing blow to the kids. It’s a devastating time for them.’’

The battle taking place in Rhode Island has resonated in Massachusetts, where state and local education leaders recently received legislative approval to take more drastic measures to improve schools, including forcing teachers to reapply for their jobs. Massachusetts officials are expected to release a list today of about three dozen underperforming schools.

Central Falls Superintendent Frances Gallo recommended the firings after teachers did not agree on issues of extra work and pay related to a state-mandated overhaul.

“Somebody has to do this for the children,’’ said Gallo, who has led the district for three years. “Their voice was not heard, and now they’re all being hurt by it.’’

Teachers, however, have accused Gallo of intransigence and union-busting after the state demanded that the six worst-performing schools in Rhode Island, including Central Falls High, be overhauled. Faculty members will continue to teach for the rest of the school year and can reapply for their jobs, but no more than 50 percent can be rehired under state guidelines.

The teachers union offered a counterproposal Tuesday that moves toward Gallo’s conditions, including a longer workday. In response, Gallo has agreed to resume negotiations. However, the superintendent said last night, the decision to fire teachers will not change unless an agreement is reached.

In Central Falls, a largely Hispanic city north of Providence where 19,000 people are squeezed into 1.3 square miles, the mill work vanished long ago, only 48 percent of high schoolers graduate in four years, and more than a quarter of its families live below the poverty level. Only 7 percent of 11th graders reached proficiency in math.

Boarded-up tenements are common, the main park is marred by X-rated and other offensive graffiti, and many of the narrow, crowded streets in the state’s smallest and poorest city are riddled with potholes. But it’s also a place with an astonishing variety of ethnic influences, including restaurants with roots in Mexico, Cape Verde, Cuba, Colombia, Venezuela, and the Dominican Republic.

Marelyn Rivera, a 15-year-old sophomore, said her small city has a big heart. “You know how families are so comfortable with each other?’’ Rivera said. “That’s what’s going on in Central Falls.’’

But now that extended family is embroiled in a domestic dispute that saddens Rivera, whose family is from Guatemala and El Salvador. “They’re like our second parents,’’ she said of her teachers.

At the nearby community center, the director, John Laboissinniere, is a 1980 Central Falls High graduate whose roots reflect the city’s century-old French-Canadian heritage. Evan Nichols, a Haitian-American, is a volunteer who referees basketball. Julie Perez, a Central Falls sophomore, transferred from another school to follow a path blazed by nine older siblings.

And for Kevin Cleveland, an 18-year-old junior with an infant daughter, the bottom line is the value of a Central Falls diploma for the school’s 850 students. If a shake-up is required, he said, so be it.

“I think it’ll be good for the school,’’ said Cleveland, a basketball and football player who wants to become a radiologist or electrician. “Right now, it’s not going so well.’’

Cleveland acknowledged that Central Falls carries a stigma that is difficult to erase. When sports teams travel to rival schools, he said, the coaches remind the players to carry themselves in a dignified, respectful way that might chip away at the stereotypes.

For Boss, the language teacher, a big part of the job at Central Falls High is to instill self-esteem. “We’re the smallest and the poorest city; we already know all these things about ourselves,’’ Boss said. “We’re looking for ways to support these kids to get beyond those things.’’

The poor graduation rate, she said, partly reflects the fact that students from transient families are constantly enrolling at the school or leaving. In the end, Boss said, teachers have to be paid for extra work. “There has to be a stipend involved,’’ she said. “That’s the way it goes.’’

To Gallo, who has been an educator for nearly 40 years, the students and not the time clock are the paramount consideration in a district that has been under state financial control since 1991.

“When I came here, they asked me to begin a reform effort to change a failing system,’’ Gallo said. “Those who constantly settle for mediocrity or less - that’s the difficulty, and we must constantly strive for better.’’

Although poverty plays a role in poor performance, Gallo said, she separates what occurs in the “safe haven’’ of the classroom.

“It’s about attitude from everyone, parents, children, teachers, custodians, everyone,’’ Gallo said. “I’ll never give up. It’s a we-can-make-it attitude. Isn’t that the old American dream? Put on your boots and get marching.’’

James Vaznis of the Globe staff contributed to this report.