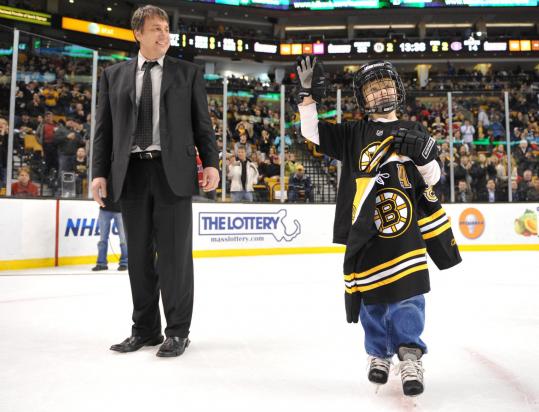 Jack Dolan, whose mother has been diagnosed with cancer, skated onto the ice at the TD Garden with former Bruin Cam Neely earlier this month. Neely invited Dolan to the Garden to honor him for raising money for a skate-a-thon charity event.
By Jack Nicas Globe Correspondent / February 21, 2010

WARREN, R.I. - It was a late Tuesday night four days after Christmas when Jack Dolan sat down to plead his case.

“My name is Jack Dolan. I am nine years old and on February 21 I will be skating for my mom who is sick. I am trying to raise as much money as i can to help get rid of this illness and to help other people who have it,’’ he wrote in an e-mail to family and friends, stumping for a cancer fund-raising skate-a-thon headed by legend Cam Neely.

The family had been mulling whether to do the skate-a-thon for months. But right around Christmas, the cause took on a deeper meaning: Jack and his sister Meaghan, 7, learned their mother, Angie, had been diagnosed with a rare form of cancer, small cell carcinoma.

That e-mail has now traveled through a wide net of support, and nearly eight weeks later, Jack has surpassed his goal and his numbers are still climbing.

From teachers at Kickemuit Middle School, where his mother is a guidance counselor, and firefighters from his father’s station to strangers touched by his story, 400 donors have pledged nearly $26,500, more than a third of the program’s total coffers.

“It literally started with one e-mail,’’ said Jack’s father, John, 42. “Then every day we woke up: Bam, another couple thousand.’’

A short walk from the Massachusetts border, just after signs for homemade jam on a long, winding road in Warren, R.I., the Dolan’s wood-shingled home sits near the edge of the ocean. A hockey net, with two empty milk cartons hung in the corners for target practice, stands out front.

“This is a hockey house,’’ John said.

Jack, looking out from under a dirty blonde mop of “hockey hair,’’ sat close to Meaghan, who clutched a pink teddy bear. Their mother, 39, napped in a back room.

“When we first heard about the program, they just wanted to skate and raise money for a good cause,’’ John said. “But once they became aware of the cancer, and found out that that’s what the foundation was for, they came to me and really wanted to do it. It became true to life, unfortunately way too fast.’’

So Jack dictated his message to Dad and off the e-mail went.

By day three, they nearly tripled their goal.

“He kind of came out of nowhere, and each day for the longest time he was continuing to raise lots of money,’’ Neely said in a phone interview Friday. “He was climbing up the ladder so to speak, and then just didn’t stop.’’

Jack’s page has averaged about $500 a day, putting him $20,000 over the next closest participant. The first-year program, which ends next Sunday, will help fund the Floating Hospital for Children at Tufts Medical Center.

“It became fun to track him everyday to see what was happening,’’ said Neely, who invited the fourth-grader to skate a lap between periods at a recent Bruins game while the crowd listened to his accomplishments.

“It was really fun,’’ said Jack, who only knew Neely from YouTube videos.

Today, John and the two children will skate for two hours in Fall River, sponsored by hundreds of well-wishers.

One is fellow firefighter Bill Cullinan, who promised to match every $1,500 Jack raises with $50.

“John gave me absolution, but I’m going to make good on it,’’ Cullinan said. “It’s just so great to have [Jack] involved, trying to help his mom.’’

“It’s touching. It makes you realize how much support we have,’’ John said. “We call it the Angie effect.’’

Angie said the response has been uplifting.

“My community has been UNBELIEVABLE and I continue to be overwhelmed each day by their generosity,’’ she wrote in an e-mail. “As much as this is a physical battle, it is equally a mental battle and their support is immeasurable.’’

For Jack and Meaghan, that’s all that matters.

“We wanted to make it end and find a cure for Mama’s illness,’’ Meaghan said.

“It was never about raising this much money,’’ their father said. “It was about two kids wanting to do something really special for their mother.’’

Jack Nicas can be reached at jnicas@globe.com