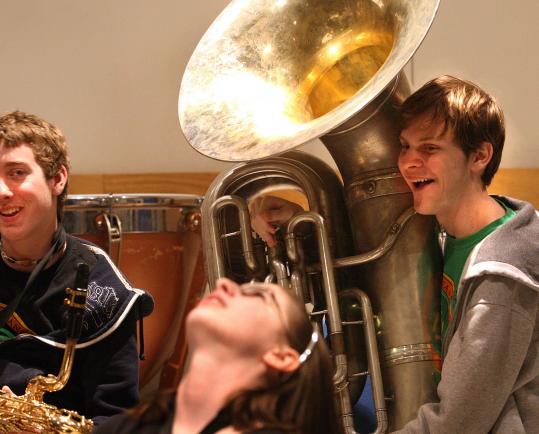 For 32 years, Ray Novack has offered his music students the same advice on cleaning their instruments: a little soap and water, he says, should do the trick.

But that same old song is creating a headache for public health officials and state lawmakers, who last week debated a bill that would require all schools to sterilize musical wind instruments, like clarinets, flutes, and piccolos, before they are passed from one student to another.

Supporters of the legislation say tests have shown that disease-causing bacteria can live inside a wind instrument for several months, but for cash-strapped music directors like Novack, the measure could create what he described as "a budget nightmare" with school officials already scrambling to slash spending.

"I guess in theory, it would be a good thing to do," said Novack, the high school band director in Beverly since 1977. "However, I just don't see it as a necessity."

Some lawmakers disagree. The bill's sponsor, state Representative Paul J. Donato, who represents Medford and parts of Malden, said he believes the same sterilization standards should apply to band instruments as those applied to medical instruments.

The move spurred a House committee to recommend the bill last December , but the legislative session expired before it came up for a vote, prompting Donato to reintroduce the measure a month later.

Although many band directors and music association officials have dismissed the recent initiatives as hand-wringing hoopla, a Medford dentist has spent almost a decade researching methods for sterilizing the instruments, a process realized when he founded Encore Etc. Inc., in 2006.

The Andover-based company offers a service called MaestroMD, which blasts instruments with the gas used to sterilize sensitive medical equipment, eliminating potential health risks that its founder, Dr. Lorenzo Lepore, compares with the dangers discovered after many years of ordinary exposure to asbestos and lead paint.

Based on the instrument, costs for the service range from $50 for a piccolo or flute to as high as $320 for a sousaphone or tuba, including shipping and handling.

As part of his research, Lepore said he placed pathogens, including those that cause strep throat and tuberculosis, in instruments borrowed from local music stores and found that almost one-third had survived after 21 days.

"I was stunned when I heard that they don't do anything," Lepore said, "and most parents, when you asked them, were not unlike myself."

Still, a lack of diagnosed cases has left many skeptical about the findings.

"I'm not sure what the costs involved are, but if it's expensive, it could become an issue for schools to do," said Edward Jack, Swampscott band director "I don't see why it could ever be necessary to sterilize the whole instrument."

Likewise in Medford, which became the first school system in the country to use the service, Richard Trotta is waiting to see how the proposal unfolds.

"We'll do it if we have to," said Trotta, the director of media and technology for the district. "Obviously, it's important to safeguard the people who use the instruments."

Meanwhile, for Richard Saunders, the K-12 music education supervisor in Somerville, the proposed requirement would have a more dramatic effect.

Saunders has seen participation in the high school band more than double in the last two years, ever since securing $100,000 in capital funding to purchase instruments to loan or rent to students who could otherwise not afford to play.

"The program would shut down," Saunders said. "For every urban program that's dealing with kids who are low-income, and cash-strapped departments like mine, it's all over."

Several music association officials, like Mark Goff, a former president of the National Association of School Music Directors, questioned whether it was a potential conflict of interest for a state lawmaker to propose a mandate that could steer virtually all business to a constituent.

Goff described the effort as a "manufactured scare tactic in order to sell a service."

Donato, while acknowledging that Lepore was a former president of the Medford High School band, dismissed the criticism.

"There's no question that this person is a constituent and a supporter of mine," he said, "but I'm not sure that he's the only one in the business. I never asked that question."

In the classroom, music directors are "always sanitizing what we're using, but to pay for this service just doesn't seem necessary," said Michael LaCava, president of the Massachusetts Music Educators Association and fine arts coordinator for the Chelmsford public schools.

"Unfortunately," LaCava said, "I think it's just another mandate for our schools, and especially our music departments, that's not going to be funded at this point."

To Tim Sullivan, a sophomore at Somerville High School who plays the baritone saxophone, the proposed regulation seemed to strike a bad chord.

"It's kind of ridiculous," Sullivan said, holding his horn. "The most you'll ever get is a cold; you're not going to catch something that's going to do you any major harm."