Not all agree that Even Start is flawed 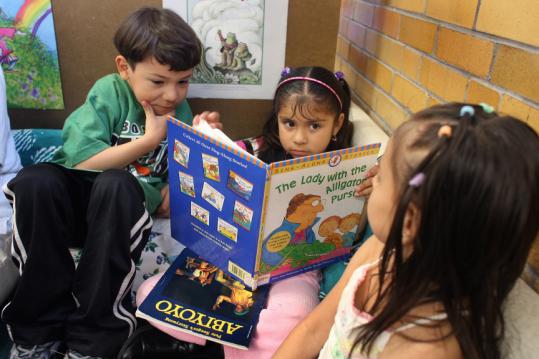 Waltham Family School (above) is one of Massachusetts' Even Start literacy programs. The others are in East Boston, Fall River, and Lowell. (Globe Staff Photo / Pat Greenhouse)
By Lisa Kocian Globe Staff / May 27, 2009
Text size – +

Having left behind cherished customs in her native Mexico four years ago, Mirella Ponce is proud of her new American tradition: She and her four children often sit around their kitchen table doing homework together.

Sometimes she helps them, but just as often, Ponce, 31, who left school in Mexico after the sixth grade, has her own homework to do. She is enrolled in Even Start classes in Waltham, which she attends most days with her youngest child, so she can learn the English she needs for herself and to help her children with their educations.

The Even Start program, created in 1987, has been targeted for elimination by President Obama, however. Three national evaluations found that the program is not effective, according to a budget document released by the administration, which estimates $66 million would be saved by cutting the program.

Students and teachers in the four Massachusetts Even Start programs are surprised - not only because they see the program as highly successful, but because the threat is from Obama. For years, President George W. Bush tried to kill the program, but they expected an ally in the new Democratic president.

"It's not just a pork-barrel-boondoggle-feel-good kind of thing," said Britta McNemar, program coordinator for the Waltham Family School, one of the Even Start programs in the state. The others are in East Boston, Fall River, and Lowell. A few years ago, there were more than 20 Even Start programs statewide. "I'd be less than honest if I didn't say I was surprised and disappointed," McNemar said. "I guess my expectations were higher."

Boston's Even Start director was surprised, too, but hopeful there's time to change Obama's mind. The cut, if approved by Congress, would not take effect until the year after next.

"I don't think he realized how hard I worked on his campaign; I was going to give him a call," said Susan Klaw, director of the Even Start Family School at Otis Elementary School in East Boston.

Though she was joking about calling, she added: "At some gut level, I'm annoyed."

What makes Even Start different from most other literacy programs is that parents and children learn together, with an emphasis on specific language skills for parents that will allow them to speak up for their children in school, help them with homework, and let them participate in their community.

In Waltham, the program gets about $280,000 from the federal government that's matched by local sources, including the Waltham schools, which lend the space.

Four days a week, as many as 70 children file into Waltham's old South Junior High School, where they and their parents receive three hours of English literacy education.

The program also includes a discussion group, where parents might learn about nutrition, for example, or how to read a report card.

Waltham focuses on children ages 3 to 5, but Even Start programs can choose any range between infant and age 7, McNemar said. Waltham's program serves parents whose first language is not English, but that's not always the case nationwide.

The unifying theme is that parents who improve their English will be able to help not only their children, but others in the community.

On a recent day, Mirella Ponce was studying the difference between "your" and "you're" while her son Noe, 3, was down the hall learning about trains. Parents and children also take some lessons together.

The program has made her life better, Ponce said. She came to this country with no English, so that her husband, who has two jobs, could find better work than he could in Mexico. At first, she was "sad and uncomfortable" because she couldn't shop for her daughters or help them with their homework.

"I remember their face when they sit at the table and say, 'Mom, please, I need help,' " she recalled.

Now, she said, she can easily help her children or attend a meeting with one of their teachers.

Though Even Start may be canceled, the administration's proposed budget includes a heavy investment in early reading, including $500 million for Early Childhood Title I, according to an e-mail from John McGrath, a spokesman for the US Department of Education. There is also a proposed $7 million increase, to $75 million, for the Adult Literacy program.

In Boston, Even Start has been credited with helping parents make more money, boost their children's reading levels, and allow them to participate more in their children's educations, according to an evaluation by a consultant for the program at Otis Elementary in East Boston.

The report drew on local, state, and federal studies of the program between 2000 and 2005.

Klaw, the director of the program, which, like the Waltham program, also serves immigrants, builds the adult curriculum around whatever the children are studying, so that parents can support them.

She's seen benefits that can be hard to measure, such as children's improved attitudes toward schoolwork because their parents are showing a high level of respect for education.

"The kids are really proud of their parents," Klaw said. "The kids will stop me during the day and they'll say, 'Miss Susan, Miss Susan, how's my mom doing in class?' "

That recognition is a powerful motivator for parents. Ponce beamed as she talked about what her 6-year-old daughter thinks of her commitment to her own education.

"All the time she says, 'Mom, I'm very proud of you because you are doing very well in your school,' " Ponce said.