Hunt is on for more men to lead classrooms 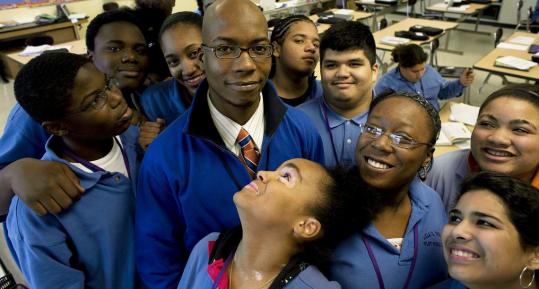 At his Ferryway School, where boys slightly outnumber girls, male teachers are a rare species, presiding over only four of the 35 classrooms.

"The district has a job fair every year, but we don't see a lot of guys," DeVito said.

The problem is especially acute, he said, when it comes to hiring elementary teachers at his school, which spans kindergarten through eighth grade. For those jobs, he said, "I don't think I've interviewed any males in the last five or six years."

The same scenario is playing out across the state and the nation, where the number of male teachers is dwindling despite a recent focus on drawing more men into classrooms. In Massachusetts, only 24 percent of teachers last year were men compared with 32 percent 15 years ago, according to the most recent state data. Nationally, a quarter of teachers are men, a 40-year low.

Even school administration offices - an arena where men once dominated - are more likely to be in the hands of women in the Bay State, with the exception of school superintendents. But that, too, could change, with the number of women expected to climb as silver-haired male superintendents retire.

At a time of increased emphasis on improving student achievement, especially in inner-city schools, education specialists are raising serious concerns that male flight from classrooms could be hindering boys' ability to learn.

A study by an associate professor of economics at Swarthmore College, which has been gaining national attention in the debate over single-gender classes, found that boys learned better in reading - a subject in which they typically struggle - when teamed with a male teacher. Similarly, girls did better in math and science with a female teacher.

Even more eyebrow-raising, the research questioned whether a predominantly female teaching force is causing more boys to be labeled as behavior problems because women may struggle in handling the sometimes rambunctious nature of boys. It also questioned whether boys may respond better to a coachlike sternness found in some male teachers.

But in an interview, the study's author, Thomas S. Dee, cautioned against a knee-jerk reaction of simply recruiting more male teachers.

"The more appropriate avenue to explore is how do we make teachers more productive for all students," Dee said. "I'd rather have my son with a great teacher who is female than a mediocre teacher who is male. Teacher quality often gets lost in this debate."

The growing imbalance between male and female educators highlights some of the challenges the state faces as it attempts to form a teaching force that better reflects the children they teach. Education specialists say that low pay and a lack of respect for teachers are primary reasons men stay away, and those issues emerge as well in efforts to recruit more minorities.

Yet the shrinking number of men can be chalked up to another reason: Some men worry that overly protective parents might falsely accuse them of being pedophiles because teaching, especially in the lower grades, is still largely perceived as a woman's job, requiring a nurturing personality that supposedly is not common among men. In other words, something must be wrong with the guy who likes working with children.

"If a woman can drive a tank in Baghdad, why can't a guy change a diaper at an early childhood education center?" said Kitt Cox, coordinator at the Birth to Three Family Center in Ipswich and one of the few men in the early education field. "We should be showing kids there are different things they can be when they grow up, and it shouldn't be defined by gender."

Anne Wass, president of the Massachusetts Teachers Association, supports efforts to bolster the number of male teachers, but she stressed that the best way to achieve that goal is by increasing salaries for all teachers and improving working conditions.

The average starting pay for a teacher in Massachusetts was $35,832 two years ago, while the average for all teachers in the state was $58,257, according to the association's most recent data.

"I hope I don't see a day when men are not teaching," Wass said. "I'm hoping it will turn around."

There are some schools, however, that have defied the odds and actually expanded the number of men on staff recently.

When the Lilla G. Frederick Pilot Middle School in Dorchester opened six years ago, about a quarter of its teaching staff was male. This year, men account for 42 percent, or 23 out of 55 teachers.

Principal Deb Socia said the school is very aggressive in recruiting men. Some of the new hires, she said, come from initiatives to bolster the racial and ethnic makeup of the school's teaching staff, which often leads her and her staff to job fairs at places such as Morehouse College, a historically black college in Atlanta for men.

"When you get a critical mass of male teachers, it's easier to get more, but we still have to look," Socia said.

And when a male candidate hedges, Socia said, she sends her secret weapon to secure the deal: Jermaine Newman, 31, a teacher leader who talks up the rewards while also talking frankly about the challenges of teaching at an inner city school.

Several male students at the pilot school said they appreciate having male teachers.

"I like how male teachers can keep us in line," said Julian McNeil, 14, an eighth-grader.

Three years after abandoning a management training program for electrical engineers at a nuclear power plant, Joshua Alexander, 26, said he has no regrets about a new career as a teacher at the Frederick and the smaller paycheck that comes with it.

"I think a lot of guys in college initially make career decisions based on money," Alexander said, "because we are told growing up to be doctors or lawyers."

A better strategy, he said, is finding a career to enjoy.

"In teaching, you really have to make a lot of self-sacrifice," he said. "I still get chills on my arms when students' eyes light up."