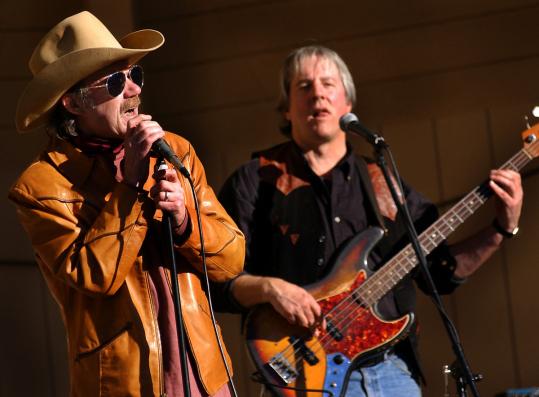 John Lincoln Wright brought country music to the rock clubs of Boston and Cambridge from the 1970s into the ’90s, introducing audiences to honky-tonk music in performances that earned accolades during the heyday of his band, John Lincoln Wright & the Sour Mash Boys.

As a songwriter, he drew inspiration from life in the Northeast, far from country music’s usual wellsprings. He declined to follow the lead of acts that build a local base, then decamp to Nashville to chase stardom that might require compromises.

“John never got beyond being a regional act, because he wasn’t going to stop writing songs about New England and wasn’t going to be a cracker,’’ said guitarist Glenn Shambroom, who formerly played with the Sour Mash Boys.

Mr. Wright died Dec. 4 in Cambridge Hospital after a series of strokes and after contracting pneumonia, said his twin brother Steve of Biddeford, Maine. He was 64 and lived in Cambridge.

“Wright’s death leaves a great hole in the New England country music community,’’ said Gerry Katz, a board member of the Boston Bluegrass Union. “He was a great songwriter, bandleader, and friend.’’

Peter Wolf, vocalist for the J. Geils Band and a longtime friend, said Mr. Wright “was ahead of the curve, back when country music was not trendy.’’

Mr. Wright once called Boston “absolutely the only place in the world that hates country music’’ and acknowledged the challenges of performing country music in New England.

“I’ve had to fight the authenticity battle all my life,’’ he told the Globe in 2000. “Maybe I didn’t grow up listening to the Grand Ole Opry, but I’ve spent the last 30 years listening to Merle Haggard and playing country music. The truth is that white people can sing the blues and Northerners can sing country. I’ve never accepted this idea of geographical barriers.’’

Mr. Wright evoked Boston in songs such as “They Tore Down the Hillbilly Ranch,’’ about a club where he had performed in Park Square. And Fenway Park was fodder for his music in “The Red Sox Song.’’

He also became friends with Peter Gammons, a former Globe baseball columnist who is now with the MLB Network and NESN.

“I’m saddened; he was a great balladeer and character,’’ said Gammons, who wrote the liner notes for Mr. Wright’s album “Takin’ Old Route One.’’

Darrell Scott, who played guitar with Mr. Wright’s band before releasing solo albums in Nashville, said that “playing with Lincoln was like getting a Ph.D. in honky-tonk music.’’

Born in Boston, Mr. Wright initially lived in Mattapan and Norwell. He was in second grade when his family moved to Sanford, Maine, where his father managed a trucking company terminal and his mother was a payroll clerk at a hospital.

“John was very smart,’’ said his brother Robert of Richmond, Vt. “He was in the top 10 of his high school class and went to Boston College in an honors program. He didn’t stay long, but he always had a way with language.’’

Years later, Mr. Wright showed his Maine roots on songs such as “Mount Katahdin Sunrise’’ and “Livin’ Wild and Free,’’ inspired by his fondness for the Wabanaki tribes in Maine.

In the 1960s, Mr. Wright fronted the Beacon Street Union, a Boston rock band that released two albums and opened for Janis Joplin at Harvard Stadium and Jimi Hendrix in New York.

The band, however, got caught in the hype of the “Bosstown Sound,’’ when record labels tried to turn part of Boston’s music scene into the psychedelic equal of San Francisco. That forever frightened Mr. Wright away from letting others decide his fate.

When the Beacon Street Union broke up, Mr. Wright went home to Maine to rethink his direction. Having idolized country legends Haggard, Hank Williams, and Bob Wills, he returned to Boston with a mission to pay tribute to them while adding original songs.

That vaulted him to the top of his niche locally, but as the tastes of audiences changed, clubs closed.

“Country music around here quieted down in the ’90s,’’ he told the Globe in 2002. “Our audience bought houses and had kids and got jobs. You couldn’t count on them to come out and get fried on a Tuesday night anymore.’’

In the absence of a regular audience, Mr. Wright slipped into alcoholism.

“I tried to get him into rehab, and I went to see him many times in different clinics,’’ Wolf said. “It was very sad. But then I saw him later at Whitney’s in Harvard Square. And though he was in bad shape, I started singing a Merle Haggard song, and he joined in and was still note-perfect.’’

More than 100 musicians passed through the Sour Mash Boys, which became the Sour Mash Revue for a while when two women joined. At its peak, the band played more than 200 gigs a year in New England.

“John’s biggest strength was his voice,’’ said Larry Flint, a close friend and longtime bass player who now cohosts “Hillbilly at Harvard’’ on WHRB-FM and fronts the Road Scholars. “People realized they were hearing someone authentic and real.’’

Throughout his career, Mr. Wright was quick to perform at benefit shows, and he was known for his generosity, once spending “the last money he had’’ to buy tickets so his parents could see Tony Bennett, his brother Robert said. “He had a great heart.’’

Mr. Wright retreated from public view as drinking took over. Flint said Mr. Wright gave him a shopping list for supplies shortly before he died: “A bottle of wine, a 12-pack of Pabst, and Ben & Jerry’s double-fudge ice cream.’’

“John lived what he wrote about,’’ Flint said. “He was stubborn.’’

For several years, Mr. Wright was estranged from his wife, Victoria Benedict, and lived in a rooming house. Benedict, who continued to support him, found him collapsed on the floor last month.

Mr. Wright’s family will hold a private burial in Mount Auburn Cemetery in Cambridge, and will announce a celebration of his life.

By dying in his 60s, Mr. Wright fulfilled the prophecy of his song “Too Old to Die Young Now,’’ which was released in 1991 and is still played on “Hillbilly at Harvard’’ and “Sunday Morning Country’’ on Boston College’s WZBC-FM.