Harvard welcomes ROTC back to campus 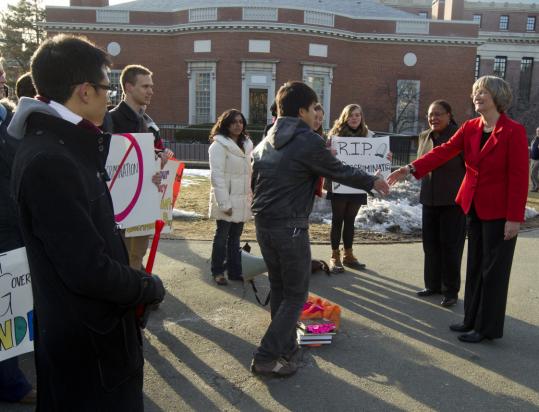 Harvard president Drew Faust and Navy Secretary Ray Mabus ended a nearly 40-year standoff yesterday when they signed an agreement to reestablish the Naval ROTC program on the Cambridge campus.

The agreement upholds Harvard’s promise to bring ROTC back to campus following the repeal by Congress of a ban on gays and lesbians serving openly in the military, the “don’t ask, don’t tell’’ policy.

About 30 former and active members of the Navy and Marine Corps and Harvard faculty and students gathered in Harvard’s Loeb House to watch Faust and Mabus end the schism between the university and military that began during the Vietnam War.

“Our renewed relationship affirms the vital role that the members of our armed forces play in serving the nation and securing our freedoms,’’ Faust said.

“At the same time, our renewed relationship affirms the commitment embodied in Congress’s historic December vote to achieve greater inclusiveness within the ranks of the military.’’

Harvard will resume formal recognition of the Naval ROTC on campus, which includes taking full financial responsibility for participating students, on the effective date of the repeal of “don’t ask, don’t tell’’ some time this summer.

Mabus said he hopes Harvard’s decision to reestablish the program on campus will cause other universities to reconsider their policies.

“I really hope that they see it the same way Harvard sees it, which is the opening up of opportunity,’’ Mabus said.

The Harvard agreement extends only to the Naval ROTC, which covers students training to join the Navy or the Marine Corps.

Harvard is pursuing discussions with the Army and Air Force ROTC to return to campus as well, said Harvard spokesman Kevin Galvin.

“I think that banning ROTC because of ‘don’t ask, don’t tell’ was a political statement,’’ he said. “I don’t agree with discrimination in the military at all. But at the same time, is it really Harvard’s place to be making statements like that?’’

While Faust and Mabus were greeted with applause within Loeb House, about 15 Harvard students gathered outside to protest the exclusion of the transsexual and transgender community from serving in the military, waving signs reading, “Faust put the pen down’’ and chanting “No ROTC without trans-equality.’’

“I know there are many students who think that the ‘don’t ask, don’t tell’ repeal doesn’t go far enough,’’ Faust said.

“My senior staff have met with them, I’m listening to their concerns, and I hope I can continue dialogue with them and enhance dialogue between them and people in the armed services.’’

Faust said she thinks the revival of ROTC will benefit all Harvard students, not just those participating in the program.

“Many of the students at Harvard will go into positions of leadership and responsibility that will need to grow upon an understanding of the military, and this will enhance their ability to have that understanding,’’ Faust said.

David Gergen, director of the Center of Public Leadership at Harvard, said that with the country at war, it is more important than ever for students from elite universities such as Harvard to share in public service.

“This is a big step forward in democratizing our national security and ensuring that people of all backgrounds are taking responsibility for defense of our country,’’ he said.

The Navy and Marine Corps personnel present at the signing took up almost two rows of seats. Second Lieutenant Ed Luna, 26, who went through the Marines ROTC program at MIT as a student at Tufts University, attended to show his support.

“I have a lot of friends who were recently commissioned from here,’’ he said. “If they weren’t on a ship or deployed in Afghanistan right now, they’d be here, just thrilled.’’

The agreement also drew praise from the White House.

“The decision by Harvard University to formally welcome the Naval Reserve Officer Training Corps to its campus is an important step in moving past the old divisions that often kept many Americans from seeing what we share with one another, including love of country and a profound respect for our brave men and women in uniform,’’ White House press secretary Jay Carney said yesterday in a prepared statement.

“With our nation at war, this sends a powerful message that Americans stand united and that our colleges, society, and armed forces are stronger when we honor the contributions of all our citizens, especially our troops and military families who sacrifice for our freedoms.’’

Theo Emery and Glen Johnson of the Globe staff contributed to this report. Vivian Ho can be reached at vho@globe.com.