Artist’s street campaign promotes an updating of the wheelchair symbol 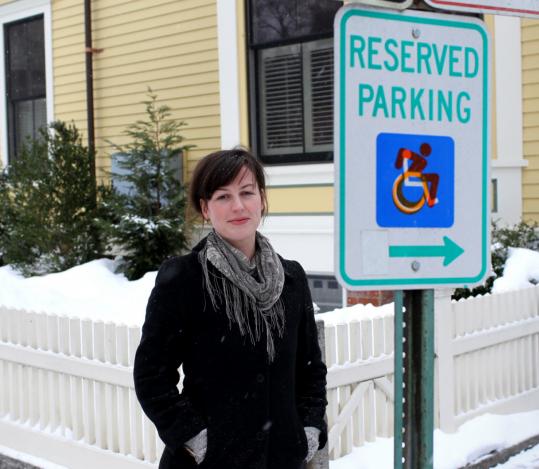 The wheelchair symbol is everywhere, one of the most recognizable icons in the world. Everyone has seen the image, but Sara Hendren believes most people have never really looked at it.

“It’s so familiar, it has the invisibility of the obvious,’’ said Hendren, who is trying to change that with a street art project that is popping up — illegally — throughout the area.

In an era when even the most mundane objects are given obsessive attention from designers, Hendren said she believes the International Symbol of Access, as it is formally known, is long overdue for a makeover. The design, which is more than 40 years old, represents dated views of persons with disabilities, she said, and lacks the life of even the most basic stick-figure pictograms, such as the pedestrian walk signal.

“The figure is static, wooden, with the squared-off geometry of machinery. The body is synonymous with the chair,’’ and creates the impression of someone who needs a push to get through the world, said the 37-year-old artist and mother of three small children who lives in Cambridge. “It is almost completely unexamined, yet it is a design with human values at stake.’’

Hendren has created stickers that feature her own design — the symbol looks more like a person in a wheelchair race — and she is placing that sticker over the current symbol. Her goal is not to replace the symbol but to evolve it, she said. Her stickers are intentionally transparent so that they call attention not just to themselves, but also the old image underneath.

Hendren, who began focusing her attention on issues of accessibility five years ago after giving birth to a son with Down syndrome, is not the first artist to make a case for a redesign. The most successful challenge to the image came courtesy of Brendan Murphy, who as a graduate student in Cincinnati in 1994 updated the image by pushing the figure’s posture forward and putting the arm behind the body, as if he or she had just pushed off on the wheel.

Murphy, who is from Ireland, was inspired in part by Christy Brown, a childhood neighbor of his father’s in Dublin whose story of life with cerebral palsy was made into the Oscar-winning film “My Left Foot.’’

His updated pictogram, seen by many as more progressive in its view of people who use wheelchairs, has been adopted by the city of San Antonio and Williams College, and such retailers as REI and A slight variation of it is used by the Museum of Modern Art in New York.

Murphy has always faced a problem getting his symbol adopted because many worry that using anything but the original will violate the Americans with Disabilities Act. But state and federal officials who work on disability issues say that slight variations on the symbol are generally permissible, as long as it is still recognizable as the wheelchair symbol.

There are others who question why the image, which has become a universal symbol for so many disabilities, features a wheelchair at all. Until recently, it was used to denote computer programs that had accessibility options for people with hearing and vision problems. now uses the “Ease of Access’’ icon, which looks like a wheel; Apple’s “Universal Access’’ icon looks like Leonardo da Vinci’s Vitruvian Man. Murphy proposed changing it to an open door.

Hendren said she is not a designer or a policy maker, but an artist, and the real goal of her guerrilla campaign is to raise questions about the symbol, not propose answers.

“There’s a much bigger question to ask about who is abled and who is disabled and what we think about dependence and need,’’ she said. “I’m just trying to start a discussion where we reevaluate our assumptions and our attitudes.’’

The recognized legal design was commissioned by Rehab International, a global advocacy group for persons with disabilities, to standardize the designation of accessible facilities at a time when many countries had their own symbol. The original sketch was done in 1968 by a Danish graphic design student, then “humanized’’ by Rehab International, which added a circle to the top of the seated figure, giving it a head, according to Rehab International’s website.

The image soon gained global acceptance, backed by the United Nations and written into the standards of the Americans with Disabilities Act, and has played no small part in the giant leap human rights have taken for persons with disabilities over recent decades.

Rehab International did not appreciate the news of Hendren’s campaign to change its iconic image, and said it was very subjective of her to criticize its design.

“There will always be people who wish to redesign [images] to satisfy their creative urges,’’ Joseph Kwan, the global chairman of Rehab International’s commission on technology and accessibility, wrote in an e-mail to the Globe. “The case of your Boston woman is nothing new.’’

Indeed, Hendren credited Murphy’s design, as well as one in use at area Marshall’s stores, for inspiring her. But she also pointed to other stick-figure pictograms that manage to convey a sense of life and action, everything from the pedestrian walk signal to the “operatic drama’’ of the person being electrocuted by the third rail.

Hendren said she knows what she is doing is technically illegal. According to Cambridge police, her unauthorized stickers would be considered a form of tagging, and she could be charged with a misdemeanor and subject to a small fine. But she said that is part of the power of street art — which includes everything from graffiti to flash mobs — where the art is in your face in a public space.

“If she were to make this thing domesticated, it wouldn’t have that social power,’’ said Brian Glenney, an assistant professor of philosophy at Gordon College and a former graffiti artist who collaborated with Hendren on the project. “What she is doing is capturing the social power of the urban street.’’

According to Pedro Alonzo, a curator at the Institute of Contemporary Art who specializes in street art, Hendren’s campaign is the essence of street art: defiant, audacious, in-your-face art that’s accessible to all.

“One of the core issues of street art is taking back public space,’’ Alonzo said. “And in many cases, it’s for a social agenda, which you have here.’’

Hendren calls her campaign an urban edit, and she is sending out stickers to others who want to pick up her campaign around the country. In a world that is continually built up and filled in, she said, there is room for people who think they have a better idea to step in and offer a tiny tweak, even if it is just to begin a discussion.

And there is a successful precedent in guerrilla public signs.

In 2001, an artist named Richard Ankrom thought an interchange on a Los Angeles freeway was poorly marked, so he machined his own sign according to state specifications, and mounted it above the freeway.

When it was discovered after nine months, officials acknowledged he was right and left the sign up.