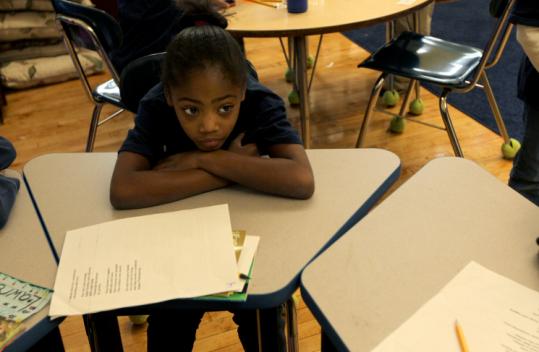 When a family from Myanmar, clad in T-shirts and flip-flops, arrived at the Edison K-8 School in Brighton on a frigid day earlier this year, they were ushered to a small, windowless room, where two women quickly hit their Rolodexes and launched a search for warm clothing.

As site coordinators for City Connects, Kristen Coon and Gail Gilmore help connect hundreds of students and their families to an array of services to address academic, emotional, and social needs. They are there to help teachers and administrators fill a critical but often overwhelming role: social service agent.

“The goal is to reach every child,’’ Coon said one morning in her office, where a young girl, who needed a break from class, typed away at a computer in the corner.

City Connects is a nine-year-old Boston College program in the midst of an ambitious expansion. School Superintendent Carol R. Johnson tapped the program this year to help turn around several underperforming Boston public schools, bringing the total number the program serves to 17.

Soon the program could reach across the state. Organizers are working to develop a partnership with Springfield that should be ready by next fall, and they are seeking funding to go into other urban districts.

Like their counterparts at other Boston schools, Coon and Gilmore try to tend to needs that can impede students’ ability to do well academically and socially.

For instance, when a student has a toothache, they will set up an appointment with a dentist who works with the school; when a student’s family loses housing, they will help locate a homeless shelter; and when an overly shy student struggles to fit in, they will try to find a group of friends or an after-school activity to work on the student’s self-esteem.

Mary Driscoll, Edison’s principal, said the counselors proved to be indispensable. “They have a wealth of experience and expertise,’’ she said. “They know who to call and what [programs or people] to bring in.’’

City Connects, which was known until this year as Boston Connects, expands as Governor Deval Patrick is pushing for an overhaul of dozens of low-achieving schools and more innovative approaches to address the academic, emotional, and social well-being of students.

“We’ve got to do something to mitigate the issues that impede young people from attending school and cause them to be inattentive when they get there,’’ Reville said. “City Connects represents an approach for doing that.’’

John Verre, Boston’s assistant superintendent for special education and student services, said that he would like to bring the program to more schools, but that expansion would be contingent on funding. The district has a four-year contract with the program valued at $3.8 million, which is covered by private donations and grants, Verre said.

“It’s hard for me to imagine scaling it up to [the city’s] 135 schools, but I’m not closing the door to that,’’ Verre said. “I think what City Connects does is absolutely essential for the academic and life outcomes for students in our district.’’

Students have seen dramatic gains in academic achievement continuing well beyond the years they were involved with City Connects in elementary school, according to a report last year by Boston College.

To connect a child with an appropriate service, each teacher meets with a City Connect coordinator to discuss the student’s academic, emotional, and social well-being. They identify what kind of service — such as an after-school program, a mentor, or tutor — that the student might need, and the coordinator makes the arrangements.

“Every child needs something different,’’ said Mary Walsh, the City Connects director. “No one will slip through the cracks.’’

Even high-achieving students will sometimes be paired with an enrichment program to help broaden their understanding of an area that interests them, such as dinosaurs or solving complex math equations.

Charmaine Williams has relied on Coon over the past few years in getting help for her two daughters, finding each of them a “big sister’’ and an after-school program near their South End home.

The help did not stop there. When Williams’s younger daughter, Tayjahne Wells, 7, had problems last year pronouncing words because of a speech impediment, Coon located a speech therapist.

When Williams’s 9-year-old daughter, Shylah Wells, was behind in English and math a few years ago, Coon found a tutor, as well as a counselor to help overcome her shyness.

“Anything I call her for, she gets done,’’ Williams said. “She’s always there.’’