A comic gets his diploma ...

... And Jimmy Tingle insists that at Harvard, it’s no joke 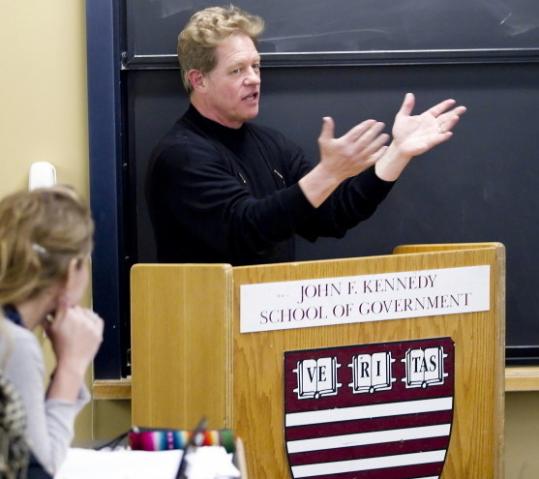 Jimmy Tingle said he wanted to go to the Kennedy School because, “I got in.’’ He will receive his master’s degree today. (Yoon S. Byun/Globe Staff)
By Bill Porter Globe Staff / May 27, 2010

Jimmy Tingle stood in Harvard Square at rush hour one afternoon, crowds buzzing around him. He didn’t see them. He was looking back, way back.

“See the doorway of that bank building over there?’’ he said. “I used to perform there.’’

What, in the bank?

The Cambridge comedian could always take whatever space the universe offered him and build a stage. He’s worked sidewalks, subway stations, clubs, and theaters. He’s been on national television and in films. He brought his social and political humor to “The Tonight Show’’ as a guest in 1988 and to “60 Minutes II’’ as a regular commentator for two seasons in 1999-2000. He ran a theater in Somerville. And today he’s headed for Harvard Yard.

Today he’ll graduate from the Kennedy School of Government with a master’s degree in public administration, earned in the midcareer program. At 55, facing his largest live audience ever, he’ll stand in front of 32,000 people at Harvard’s commencement and deliver the graduate student oration, his five-minute speech having been chosen by a faculty committee from submissions by a pool of 32 applicants.

“He’s clearly got a media presence,’’ said Kennedy School professor and political commentator David Gergen, who had Tingle as a student in a leadership development class.

“He’s clearly on top of the issues. He comes away now with a Kennedy School degree. He’s going to have additional insights and greater policy sophistication, but he had the humor and the satire long before he came to Kennedy School.’’

Tingle has actually run for office already — in his satirical show “Jimmy Tingle for President: The Funniest Campaign in History,’’ which sported the slogan “Humor for Humanity’’ and used comedy to tackle social issues: “I would fight white-collar crime by having ex-convicts in the Tingle Cabinet,’’ he said. “I would get them from the Cabinets of previous administrations.’’

So was that a test run for the real thing? Will he follow US Senator Al Franken’s model and run for office?

Sounding a bit like a practiced politician himself, Tingle answered coyly.

“Possibly. I’ve always been interested in politics. What I’m more interested in is using entertainment as a cultural influence. That’s probably more the direction I’ll go in immediately. That’s what I see myself doing, but who knows? Life’s not scripted out.’’

Tingle grew up in Cambridge, the oldest of four children. His father, James “Cotton’’ Tingle, was a landlord and owner of a taxi company; Harvard students were among those who drove for him. Jimmy Tingle went to Cambridge Latin school, then graduated from Southeastern Massachusetts University, now the University of Massachusetts, Dartmouth, in 1977. “I always liked school,’’ he said. “I wouldn’t say I was a great academic achiever.’’

But there was another family connection to Harvard — and the world of politics. Tingle’s uncle, Joseph A. DeGuglielmo, was a 1929 Harvard graduate and friend of John F. Kennedy’s who campaigned for him during Kennedy’s first congressional run. DeGuglielmo, who died in 1983, was an associate justice of the Boston Municipal Court and served Cambridge as mayor and city councilor.

Tingle ran his Off Broadway Theater in Davis Square for five years until 2007. Soon after, he started thinking seriously about the Kennedy School.

He knew people who had gone there, including Cambridge City Council member Marjorie Decker.

“I was always intrigued by Harvard and the Kennedy School,’’ Tingle said. “I said maybe I’ll try to apply to this place. I don’t know what for, except that I’m really interested in politics and public policy. . . . Let me just see if I could even get in.’’

The midcareer program accepts about 200 students from around the world, ranging in age from 30 to 60. They include soldiers, CEOs, elected officials, nonprofit leaders, and policy experts. “He’s likely the first comedian but not the first artist,’’ said Robin Engel, who oversees the program. “He’s been a wonderful addition to our community. He’s excelled academically and demonstrated how humor can be a useful way to break down barriers and allow dialogue to happen that otherwise wouldn’t occur.’’

Wassim Khazmo, 34, a midcareer student panelist at the forum and a policy adviser for the Palestinian Authority’s negotiating team, said: “Despite that we are in a very serious conflict, we still can joke about it. Humor is a part of humanity.’’

But at Harvard, Tingle has been far from the class clown. “I loved being there in part because I did not have to perform or be funny,’’ he said. “The biggest thing I got out of this is that there’s a way to use what I do to make a difference in the world. Entertainment in and of itself is a contribution, but there’s a way to use entertainment to make more of a contribution.’’

His summer plans include gigs at Wellfleet Harbor Actors Theater and the Duxbury Center for the Performing Arts.

But meanwhile, how about that commencement speech? Here’s a sample line:

Bill Porter can be reached at wporter@globe.com.