A fresh pitch on ‘U’ tube 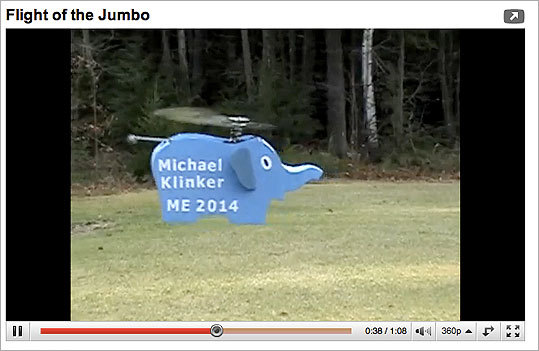 (YouTube screengrab) Michael Klinker, an aspiring mechanical engineer built a flying elephant (Tufts' mascot) and named his film "Flight of the Jumbo," with the Dumbo soundtrack as background music for his admission video.
By Tracy Jan Globe Staff / February 21, 2010

Amelia Downs performs a series of dorky dance moves named after math terms like the scatter plot and the bar graph. Sam Zuckert plays a song made solely from the sounds of a piece of paper ripping, crumpling, and waving in the wind. And then there’s Mike Klinker, using a remote control to fly a Styrofoam elephant - with his name on it - through a clearing in the woods.

Tufts University this year has become the first selective college in the nation to encourage applicants to submit videos about themselves. More than 1,000 high school seniors have included one-minute video essays in their bids for a spot in the Class of 2014.

And in a strange melding of the once-private college applications process with the openness of the Internet, the videos, posted to YouTube, have generated a surprise following among Tufts students and alumni, who are posting comments campaigning for their favorites.

Downs’s video, for example, has drawn more than 6,000 viewers, earning her a moniker, “math dance girl.’’ One of her fans wrote: “Current polls hold that math dance girl must come to Tufts. Otherwise people might transfer in protest.’’

Lee Coffin, Tufts’ dean of admissions, says the clips showcase a cre ativity and personality that would be hard to convey on paper. The idea is part of an effort begun by the university in 2006 to evaluate aspects of applicants’ intelligence not reflected in SAT scores and grades.

“There’s just this little moment of transparency,’’ Coffin said. “It’s easy to forget that there’s a 17-year-old at the other end of this, and these videos are a very real reminder that these are high school seniors. They are goofy and they’re sweet and they’re still figuring things out.’’

Of this year’s 15,436 applicants to Tufts, more than 6 percent submitted a video.

The videos are judged as one part of a whole picture, with a student’s academic record still weighing the most, Coffin said. Production value will not be a factor, nor will public comments be considered in the admissions team’s decision, he said. What counts, he said, is creativity and wit, something that shows a student’s voice or talent - that can answer, “What spark do they bring to the class?’’

“It’s just one more thread we get to knit into the student’s story,’’ Coffin said. “The video might be great, but if you’re a C student, you’re still not getting in.’’

Other colleges do not explicitly ask for videos, but most accept whatever students choose to submit. Dartmouth College admissions staff recently discontinued paper applications and began reading everything on their computers, making it easier to click on Internet links to videos, blogs, and personal websites that more students are now including.

Harvard College has for decades asked students to submit any supplementary materials - art portfolios, manuscripts, music recordings, and films - that display exceptional talent. But Harvard’s admissions dean frets that video applications may give an unfair edge to students from affluent families.

“Students from families with substantial financial resources are in a better position to provide such materials, so that’s something we have to be very careful with,’’ said William Fitzsimmons, Harvard’s dean of admissions and financial aid.

But Coffin said more than 60 percent of the videos reviewed by the college so far were submitted by applicants for financial aid.

“Access to video capabilities - via computers or cellphones, even - among teenagers is almost universal,’’ he said.

Many of the videos are rather simple scenes - little more than a student talking into the camera on a computer. Others are highly edited with story lines and soundtracks.

“Some of the best videos are rather crude or simple in terms of their production values but they feature an appealing narrative or clever conceit that introduces us, more deeply, to an individual student,’’ Coffin said.

Amir Mosallaie, a high school senior from Pasadena, Calif., produced an animated short featuring a stick figure walking through the milestones of life. Images of a pacifier, teddy bear, school bus, pencil, movie camera, and a diploma fall upon the him as he grows taller. It ends with an airplane - a scene Mosallaie says makes his mother tear up each time she watches - and the Tufts sign.

Mosallaie has been accepted early decision - news he announced to supporters in the public comments below his video - and plans to major in English at Tufts with a minor in film studies. The video option gave him an opportunity to stand out, he said, because his grades, while decent, are not at the top of his class. It also helped him decide that Tufts was the college for him.

“I was looking for a creative environment and if the university is asking students to submit a one-minute video, that’s pretty much as creative as you can get in the application process,’’ he said.

Downs, whose best friend filmed her in a playground near her Charlotte, N.C., home, performed the dances she made up in calculus class last year.

“I am here to show you how I combine two of my favorite things: being a nerd, and dancing,’’ the 18-year-old tells the admissions committee on camera. Dressed in shorts and a T-shirt, Downs then proceeds to spin on one leg to illustrate “volume of a solid of revolution on the Y-axis’’ and moonwalks with her arms undulating up and down for the “sin and cos graph.’’

The moves impressed one Tufts student so much that Downs was invited by a posting to join the Tufts Dance Collective - if she gets in.

Anyone with an Internet connection can call up the videos by searching for “Tufts application’’ on YouTube.

And plenty of applicants, already accustomed to publicizing their lives via Facebook and other social media, admit to scoping out the competition online.

“It’s a little bit embarrassing,’’ Downs said, acknowledging that she didn’t expect strangers to be commenting on her college application.

The videos and other application supplements - like using an 8.5-by-11-inch sheet of paper to create something - help colleges assess applicants’ creativity, wisdom, and practical skills, said Robert Sternberg, dean of the Tufts School of Arts and Sciences.

Applicants who are strong in those areas tend to have higher freshmen GPAs and participate in more extracurricular, leadership and citizenship activities in college, he said.

“People worried that this is flaky and we’ll start getting dumb clucks, but that’s not true,’’ said Sternberg, the author of the forthcoming book, “Admissions for the 21st Century.’’

Tufts, hoping to build a class of 1,275 freshmen, will issue its admissions decisions March 30.

Downs, the math-dance girl, joked that if she does not get in, she will rouse her newfound fan base.

“I can stage a rebellion,’’ she said.