Looking beyond grades and scores 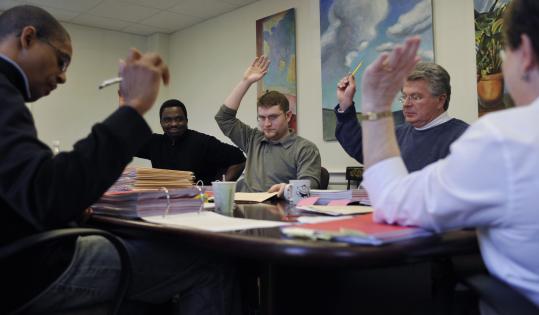 The admissions team at Tufts University embraced the Yahtzee enthusiast and budding engineer who built a wooden catapult in his backyard and the straight-A teenager who described herself as a "wise old owl" whom her friends turn to for advice.

Amherst College eagerly admitted the son of a New York City cab driver, a Bangladeshi immigrant who had flunked gym class but founded a newspaper dedicated to economics. The school's admissions committee also delighted at the math wiz from Queens who loses sleep when he's stumped by a problem and lives for bowling nights in his mother's league.

All the successful applicants to Tufts and Amherst, two highly selective liberal arts colleges, boast impressive academic credentials, but so do most of their competitors. What they share is a spark that makes them stand out from the crowd, whether through singular talents and values, fierce determination in the face of hard circumstance, or force of personality.

For high school seniors aspiring to the nation's top colleges and universities, the inner workings of admissions offices seem shrouded in mystery, a murky process that fuels endless angst and speculation. As students nervously await their decision letters, the two highly selective colleges invited a Globe reporter to observe admissions deliberations firsthand. The sessions reveal a complex, nuanced system that is at once analytical and intuitive, rigorous and forgiving, impartial and deeply personal.

They also underscore how fierce competition makes instinctive judgments all but inevitable, and provide rare insight into how intangible qualities can sway decisions.

'Long march begins'
"This is the sobering part," Tufts admissions dean Lee Coffin tells the seven-member committee gathered around a long conference table on a recent Thursday morning at the school's campus in Medford. "The long march begins."

It is the season's first meeting of the review committee at Tufts, and Coffin surveys the lay of the land. By this point, all the applicants are strong, and often there is little that separates them academically. So the committee often goes beyond the numbers and takes an in-depth look at personal qualities and talents.

The panels are groups of admissions officers, led by the dean of admissions, who gather for all-day review sessions in March. Many of the committee members are young, 20-somethings responsible for recruiting in specific parts of the country.

From the 15,000 applicants vying for a slot in next fall's freshman class, the college has admitted 2,200 whose top-notch qualifications made them shoo-ins, leaving about 10,000 students competing for just 1,100 offers. Tough odds for the students, and a daunting, at times emotionally draining, task for the panel.

To Coffin's right sits Emily Roper-Doten, an animated 29-year-old who headed up Tufts recruitment in Illinois, the morning's topic of discussion. So far, each application has been read twice, and Roper-Doten rattles off a brief summary of students' academic credentials, personal essays, and recommendations from teachers and reviewers. Around the table, admissions officers call up student files on their laptops, scanning a four-year transcript in a few seconds.

The first student, from a public high school in suburban Chicago, ranked behind about one-quarter of her senior class. Reviewers had given her the lowest overall academic rating, and panel members wonder why she hadn't already been denied. Discussion is brief. "Do you want to hear any more?" Roper-Doten asks. No one did.

Later, the group wastes little time in rejecting a straight-A student - a Girl Scout, dancer, and peer tutor, to boot. There were plenty of others just like her, says Daniel Grayson, a 25-year-old Tufts alumni on the panel.

Using a "holistic" approach, Tufts and other selective colleges look beyond test scores and grades to an array of personal qualities, including intellectual talent and curiosity, leadership, ambition, and work ethic. They also judge students on their educational and family background, and give preference to low-income and minority students who overcome obstacles to excel.

After rejecting a number of candidates with stronger academic records, for example, Tufts admits a student from a blue-collar Italian family who wrote movingly about his love of "food and family" and his relationship with his developmentally disabled brother. The student, who attends a Catholic school and works summers as a golf caddy, is judged a "smidge weak academically" by one reviewer.

But the group clearly takes a shine to him, and admits him unanimously.

In the most intense debate of the morning, the panel splits over a hearing-impaired student from a rough neighborhood who travels more than an hour to a magnet high school. Her test scores and grades were mediocre, with a B average and C's in English. But she grew up speaking Spanish, reviewers note, and she helped care for her siblings from a young age.

"We've taken kids like this who wind up being president of their class," said Isabel Casariego Bober, 26.

In the context of her background, her scores on the ACT were strong, Bober adds. If she had gone to the high school in her own neighborhood, they agree, she probably would have gotten all A's.

Some committee members think she might struggle at first at Tufts, but would eventually find her way. Others fear the workload would be too much.

"I think she's overcome a lot," Grayson says, "but I don't like setting these kids up to fail."

"There's so much strength in her," Roper-Doten says.

Back and forth they go for 20 minutes, without reaching a consensus. They put her in the "bullpen" with other knotty cases they will tackle another day.

A look behind the stats
The Colorado student's ACT score is mediocre, and his grades have a good share of B's. On statistics alone, he is a clear-cut no.

But as details emerge, the six Amherst College admissions officers, a youngish group arrayed around a cluttered conference table on a recent Monday morning, take a closer look.

Reading his file from large three-ring binders, the panel learns that his mother is unemployed and his father left years ago. He lives in a crime-ridden neighborhood but has "worked hard not to fall into that trap," a reviewer notes. He takes film courses at the local community college.

By that point, his board scores fade in the distance, and the vote is a unanimous yes.

Next is a New Mexico student who earned all A's while working 20 hours a week and volunteering at the Ronald McDonald House. She is "mature beyond her years," her teacher wrote. Her essay, a reviewer writes, told "more about her than any test score." The panel agrees, and their hands shoot upward in unison.

During the morning, the panel evaluates more than 30 students from low-income families, most from New York City, as part of the larger task of winnowing 7,700 applicants to 1,100 admitted students, a rate that ranks among the country's lowest. Most are minorities and children of immigrants who did not grow up speaking English at home. Their parents had, for the most part, not gone to college, and neither will most of their high school classmates.

In keeping with the college's aggressive campaign to admit more students from poor and working-class neighborhoods, the panel accepts the majority of them.

Reviewers note what students' parents did for a living, what level of education they completed, and what percentage of their high school goes to college. Students who were deemed "SP30," meaning neither of their parents went to college, or "SP31," meaning the family has a low income, were given a decided boost.

Yet students from such backgrounds had to persuade the committee they were prepared for a top-tier school, primarily by their performance on advanced placement exams.

Members are impressed by a student from Queens who scored high on the US history and statistics AP exams, and Dale Hendricks notes that the applicant's father, a Jamaican immigrant, had been imprisoned and deported.

But her SAT scores were 1,180, and other students who had overcome just as much had done better.

"It's a tough story," Hendricks says. "But in New York, there are many cases like this." She's wait-listed.

The litany of broken homes and failing schools puts the gulf between the have and have-nots in stark relief.

Yet many of the sagas are inspiring, and the panel clearly savors the opportunity to give talented students a chance at a better life.

At one point, the discussion turns to a student who grew up in a poor immigrant household and did not learn to read proficiently until she was 11. With what her teachers described as an "unrivaled work ethic," she became a standout student, earning A's in AP English and history and scoring 770 on the SAT critical reading section.

Coming from a student at a top prep school, the score would be impressive, the panel agreed. From a student whose parents didn't go to college, who grew up in a neighborhood ravaged by gangs, it was near-miraculous.

All the drive in the world, added Tom Parker, the dean of admission. This time, there was no need for a show of hands. The decision was understood.