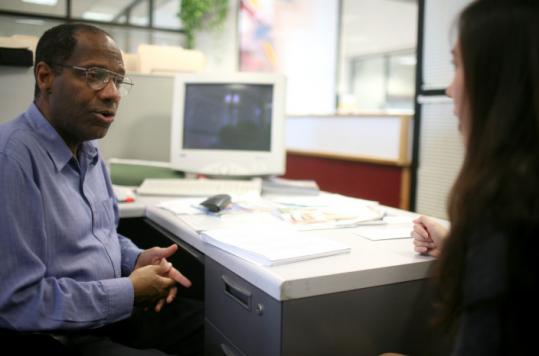 Students line up outside Jimmie Roberts's office at Bunker Hill Community College this time of year, a stumped and stymied bunch trying to enroll in four-year colleges. An academic counselor, Roberts does his best to guide them through the thicket of transfer policies among the state's colleges and universities. But even for a veteran who knows the system's pitfalls, it's no easy task.

In theory, transferring from one of the state's community colleges, usually to a public state college or university, sounds simple enough. But in practice, students face a baffling patchwork system in which course credits rarely flow smoothly from one school to another.

"They are very frustrated," Roberts said of students. "It's not uniform, but college by college. Some courses are counted only as electives, some don't count at all. Colleges pick and choose, and students wind up taking more courses than they should."

Public colleges have instituted an array of joint-admissions pro grams, transfer compacts, and informational websites in an effort to streamline the process, but state education leaders and legislators say more needs to be done to ease the ordeal.

Responding to complaints, they are considering statewide measures to streamline the system as part of a broader effort to improve the colleges, the frequent target of criticism for lackluster graduation rates. A taskforce created by the Massachusetts Board of Higher Education plans to announce a range of recommendations to reduce transfer barriers this spring.

The 15 community colleges account for nearly half of all the students at Massachusetts public colleges and universities. Average tuition and fees are about $3,500 for a range of general and career-track classes.

Maryann Broxton, a 38-year-old student at Bunker Hill, had heard warnings about the potential pitfalls in transferring, and has met with administrators at two schools she is considering - Tufts University and Simmons College - to avoid surprises.

"You really need to do a lot of investigation, so you don't take a course and find out they won't take it when you get there," she said.

The flaws run deeper than ordinary gripes about red tape, educators say. It forces students to repeat courses they have already paid for, delaying their progress toward a degree or derailing their education altogether. That carries ramifications for a public higher education system that envisions the community colleges as feeders for the state colleges and economic engines for a job market that puts a premium on college degrees.

Francesca Purcell, director for academic policy for the Board of Higher Education who chairs the transfer task force, said the unwieldy system discourages some students, many of whom attend part-time because of work responsibilities and take years to earn a substantial number of credits, from pursuing a bachelor's degree.

"Anything that gets in their way could be the final straw that prevents them from continuing on," she said. "These are the students who are the most tenuous, and they really need a path they can see."

State Representative Christopher Donelan, a Democrat from Orange who serves on the task force and Joint Committee on Higher Education, said that repeating classes puts the cost of college beyond the reach of many students, and said he supports statewide action to coordinate the system.

Administrators at four-year colleges defend their guidelines as clear and consistent, and say many students wrongly assume their credits will automatically be accepted and that they can switch majors without slowing their progress toward a degree.

"If you switch tracks, it's going to impact your credits," said Kathy Magnusson, associate director of admissions at UMass-Dartmouth.

Four-year schools and community colleges have taken steps to simplify the process.

UMass-Dartmouth visits community colleges monthly and will tell students on the spot what credits the school accepts. Middlesex Community College has tailored academic programs, such as business and early education, to match majors at popular transfer destinations such as UMass-Lowell.

Other states have taken aggressive steps in recent years to simplify transfers.

In Texas, lawmakers mandated a core set of classes that was fully transferable to all two- and four-year public colleges, significantly streamlining the system. California has created a clearinghouse website - assist.org - with a searchable database of every college in the state detailing what courses transfer to what campuses. New Jersey enacted a law in September calling for collective statewide agreements to promote a smooth transfer of academic credits.

Massachusetts has a statewide transfer compact that allows full transfer of credits for community college graduates, but educators say the agreement is not consistently honored and has many gaps.

It does not apply to students who transfer before completing their degree, and colleges may choose not to count certain courses toward major or graduation requirements.

"When students transfer from college to college, they almost have to negotiate their credits," said Janice Bonanno, dean of student affairs at Bunker Hill Community College.

A major sticking point, advisers say, is that four-year schools are often skeptical about community colleges courses stacking up against their own.

South of Boston, six colleges and universities created a regional collaborative that works to make sure courses are equivalent so students can easily transfer credits.

"Professors sit on the table and pick apart each others' syllabi," said Jane Souza, executive director of the collaborative. "If you get an A at Massasoit [Community College], it should equal an A at Bridgewater [State College]."