Over 15 years, one couple added garden after garden to the expansive grounds surrounding their Grafton home. Today, the property is a paradise of woodland, waterfalls, pools, perennials, and wildlife. 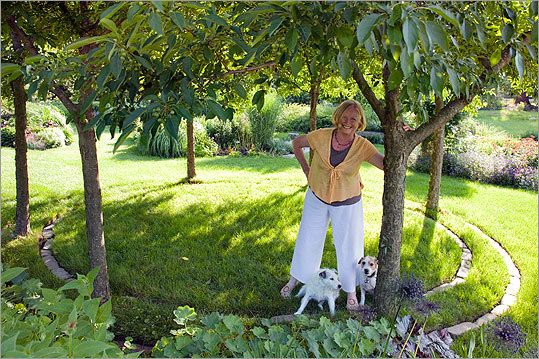 In 2008, Brigham Hill Farm in Grafton joined the ranks of notable landscapes documented in the Smithsonian’s Archives of American Gardens. But building a garden showplace was not part of the plan when Shirley and Peter Williams bought the farm 35 years ago. The couple spent their first 20 years restoring the 18th-century house and barn and raising their three children. Outdoor life centered on the swimming pool.

Once the couple started working on the landscape, they did so without a master plan. “The place tells you what it wants. We just kept adding one garden after another,” recalls Shirley. “It took on a life of its own.” The Williamses, who started with 20 acres, bought 80 more of the farm’s original acreage and put it in a local conservation trust so it can’t be developed.

The Williamses employ two gardeners, John Carlson, who also cares for the farm’s animals, and horticulturalist John Mapel. But the key has been designer and plantsman Warren Leach, co-owner of highly respected Tranquil Lake Nursery in Rehoboth. “We would have built a garden, but it would not have been as good without Warren,” says Peter.

It was the WGBH Victory Garden TV show that got Shirley started. When the garden in her front yard went wayward 15 years ago, she invited several designers to give her ideas. She liked Leach’s redesign best. He turned it into an herb garden with a walkway and a water feature, and, sure enough, it won a nationwide Victory Garden contest. Thus began a collaboration that continues to this day.

Next, Peter, a tree lover, asked Leach to retake a hill overrun by Japanese knotweed and poison ivy. “There was a lot of digging,” recalls Leach. Today “Peter’s Woodland Watergarden” is a paradise for wild birds, with acres of berry-laden young trees (see sidebar on facing page) surrounding waterfalls and garden pools that Leach fashioned from old cellar holes, a pile of original granite foundation stones set aside when the barn was remodeled, and a natural ledge.

The following year Peter wanted to give his wife a new perennial garden. So Leach planted a circle of Sugar Tyme crabapples around thousands of spring bulbs that bloom at the same time. New perennial beds are full of such choice rarities as dark-leaved snakeroot and tall, airy lavender mist. The perimeter of the lawn is hedged with 30 pink Japanese peonies.

As the gardens began attracting more visitors, the Williamses needed more space for outdoor entertaining. To enlarge the terrace, Leach moved the vegetable garden down the hill and turned it into a formidable and surprising feature with raised granite beds and a waterfall and rill, all surrounded by high stone walls. (Formal vegetable gardens are all the rage.) He replaced the straight asphalt driveway with a curved, paved area of herringbone granite that leads visitors through a new grape arbor on their way to the terrace, which is accented with large container plantings designed by John Mapel. Leach reportedly finished the two-year project a half-hour before the state’s lieutenant governor and members of the Grafton League of Women Voters arrived to use it. “Warren isn’t an 11th-hour person; he’s a quarter-to-midnight person,” teases his wife, horticultural educator Debi Hogan.

The community has benefited from all this expansion. The Williamses have opened their gardens for many fund-raisers, most recently for the New England Unit of The Herb Society of America, the teacher-education nonprofit Massachusetts Agriculture in the Classroom, local garden clubs, and the deep-pocket benefactors of the Garden Conservancy, which preserves exceptional gardens nationwide.

“For me, the biggest reward is the pleasure this garden gives visitors,” says Peter. “I like to see it through the eyes of people who are here for the first time.” One fall they were visited by a descendant of Tahiti’s royal family. “She saw the autumn colors against the blue sky and said: ‘This is the most beautiful place I’ve ever seen,’ ” Peter says.

In 2009, the Williamses hosted members of the International Dendrology Society, which includes tree enthusiasts from some 50 countries. They were invited to join, a great honor. “Some of these members are people who have inherited arboretums that have been in their family since the 1300s,” says Shirley. Members are invited on study trips to various countries, and the Williamses say they just might pack their bags. Their garden has not only put them on the map, but also given them a new window on the world.