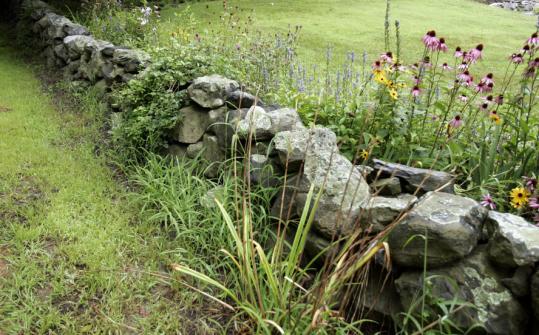 A stone wall on the property of Ben Aronson in Framingham. (Adam Hunger for The Boston Globe)
By Lisa Kocian Globe Staff / August 20, 2009

Don’t mess with his moss.

Framingham resident Ben Aronson says he has twice caught drivers stopping to swipe moss-covered stones from the old wall running in front of his house.

The aged rocks are valuable to people who want to re-create a quintessential New England look that dates back to Colonial times - and that his home came by honestly.

“It takes decades to develop this patina of lichen and moss,’’ said Aronson, comparing his stones to unweathered rock. “It’s the difference between fine wine and grape juice.’’

Aronson called police after both incidents, but there was little they could do. A century-old law calls for a fine of no more than $10.

As preservationists around New England grow increasingly alarmed over the loss of stone walls, a lawmaker from Framingham wants to take action. State Representative Pam Richardson, a Democrat, has filed a bill that would stiffen penalties for anyone caught stealing what she considers historic treasures.

“Stone walls are really part of the fabric of Massachusetts history,’’ said Richardson. “The current law is completely antiquated. . . . If someone calls in a complaint that there’s been destruction of a stone wall, there’s no guidance for law enforcement professionals on how to handle it.’’

Richardson’s bill calls for imprisonment of up to six months, a fine of up to $500 or three times the value of the property dismantled or stolen, and a requirement that the offender pay for the replacement or reconstruction of the wall. Richardson’s bill would not restrict what property owners do to stone walls on their own land.

It is under review by the Legislature’s Joint Committee on the Judiciary.

Richardson filed the bill on behalf of Framingham resident Jeff Kotkin, a member of the town’s Historic District Commission, who had heard about Aronson’s plight and has his own stone wall to protect.

“It’s sort of an immediate sense of history and place for me,’’ said Kotkin. “It reminds me that lots of things have gone on on this property and all around. They are above-ground archeological remains.’’

Stone walls were created primarily in the 1700s and 1800s as farmers cleared the rocks and boulders from their pastures.

“They didn’t have machines, they had to do it by hand or with oxen,’’ said Kotkin. “They brought them as far as they could, which was usually to the fence line. They didn’t need to go any further.’’

“People are stealing them because they want authentic-looking stones for new walls,’’ he said. “So they’re taking them and selling them for new walls.’’

Other New England states have also begun seeing their stone walls as more than just piles of rock.

“There’s definitely some momentum going and I’m delighted by that,’’ said Robert Thorson, a professor of geology at the University of Connecticut. He is coordinator of the Stone Wall Initiative and has written three books on the subject.

Stone walls are an integral part of the New England landscape, he said, “just as important as canyons are to Arizona.’’

Although there isn’t a way to quantify how widespread stone walls are now in Massachusetts, a “fences census’’ found that in 1871, 60 percent of all fences in the state were made of stone.

“We don’t know how much we’ve lost,’’ said Thorson.

He supports the effort to strengthen the legislation, calling the current $10 fine “absurd.’’

Both Rhode Island and New Hampshire have recently taken up the cause, he pointed out.

Earlier this month, New Hampshire’s governor signed into law a measure to charge stone wall thieves triple damages and attorneys’ fees for the restoration of a damaged wall.

In May, the Providence Journal reported that several Rhode Island communities were considering a three-year-old Smithfield ordinance that prohibits changes to or destruction of any stone wall built before 1900.

For Aronson, a painter by profession, the walls represent art as much as history.

“These were real artists that built these walls,’’ he said. “This kind of very high-quality craftsmanship is impressive to me.’’

While from a distance the stones all look gray, up close they are a riot of greens and reds and blues. Aronson has become a connoisseur of such details, noting the way larger and smaller stones fit together without mortar.

The spaces in between form an important part of the aesthetic, he said, drawing an analogy from music: “The rests are just as important as the notes.’’ A well-crafted wall “makes music visually,’’ he said.

Stone walls are part of a tradition handed down not just from Colonial times but also from ancient civilizations.

“The greatest enduring works by humans have been made in stone,’’ said Aronson. “If we lose these, we lose one of the most beautiful, familiar features of the Colonial New England landscape.’’