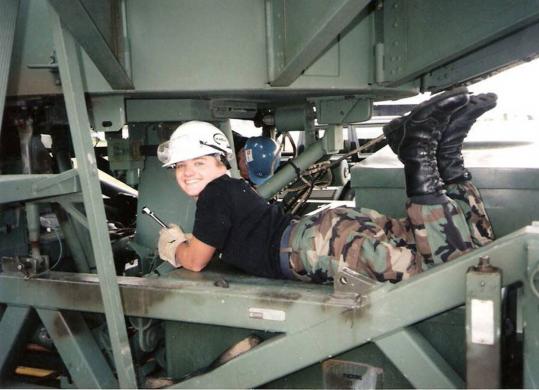 “When you bury things for so long, it damages you internally,” said Jennifer Norris, who says she was diagnosed with post-traumatic stress disorder, severe depression, and anxiety, resulting from military sexual trauma. (COURTESY OF JENNIFER NORRIS)
By Jan Brogan Globe Correspondent / May 14, 2012
Text size – +

Jennifer Norris joined the military after college because she wanted to serve “a bigger purpose.”

That was 15 years ago. Within the first two years of her enlistment as an airman in the Air National Guard in Maine, she says she was raped by a recruiter and sexually assaulted by three noncommissioned officers. Norris, who retired from the guard in 2011, at age 40, now has a new sense of purpose: helping other women veterans suffering from military sexual trauma. Last week she participated in the Truth and Justice Summit in Washington, D.C., a convening of survivors of military sexual assault, and told her story to the Maine congressional delegation.

In an interview, Norris recalls that initially she remained silent after the rape and first subsequent assault. “I was so gung ho about my military career, I wasn’t going to let anything get in the way. I didn't want a messy scene. I didn't want anything impacting my career.”

But eventually she did speak out, within the bounds of the military and its justice system. Her own punishment was much worse than anything they received, she says.

Branded a troublemaker, Norris says, she was harassed over minor infractions and not allowed to train on equipment she needed to get promoted. She felt her only recourse was to transfer to the Massachusetts Air National Guard. Although her career progressed — she ended up being promoted to technical sergeant — her health suffered. “I turned to drinking to cope,” she says.

It wasn’t until she transferred back to Maine, five years ago, and met her husband-to-be that she realized she needed help. “When you bury things for so long, it damages you internally.”

The US Department of Veterans Affairs has called military sexual trauma “an epidemic.” Since the VA began universally screening its patients for MST, in 2002, more than one in every five women have reported sexual harassment or assault during military service. That compares with 1 in 100 men reporting sexual harassment or assault, for a total of 52,907 men and 65,796 women as of Sept. 30, 2011.

According to a Pentagon report released in January, there were 3,198 incidents of sexual assault throughout the entire military in 2011, and Defense Secretary Leon Panetta said he believed that number was grossly underreported. The rate of violent sexual crime within the Army had increased 64 percent since 2006.

MST is not a diagnosis. It is the military's term for psychological trauma that follows any forced sexual activity — from groping to offensive remarks to rape — that occurs while serving in the military. MST can lead to a host of health problems, including, post-traumatic stress disorder, anxiety, depression, substance abuse, eating disorders, and hypertension.

Norris says that when she finally got help, she was diagnosed with PTSD, severe depression, and anxiety.

Within the military, a victim of sexual trauma not only knows the perpetrator, but is often dependent on him, says Dr. Dana Weaver, chief of mental health services and the MST coordinator for the VA Central Western Massachusetts Healthcare System. Aside from the difficulty of escaping repeated advances in a small unit, there is the issue of unit cohesion. “In the combat zone, there is a sense of shared mission. The safety of the unit is paramount.”

This leaves the victim with an intense sense of betrayal, but also shame, and reluctance to do anything that would negatively impact the unit, Weaver says. “They feel both an internal and external pressure not to report.”

This delay in reporting, the continued close contact with their perpetrators, the sense of betrayal, as well as the youth of many of these victims, all compound the impact of the trauma, according to Sara Eichstaedt, a clinical social worker who treats MST survivors at the Springfield Outpatient Clinic.

The VA offers a variety of treatment options for MST, but the cornerstones are prolonged exposure therapy, which involves talking about the traumatic event under the supervision of a counselor, and cognitive processing therapy, during which patients are helped to change the way they think about the trauma and its aftermath. Eichstaedt says she also offers EMDR, a therapy that requires a patient to focus on blinking lights or a practitioner’s finger moving back and forth, a form of bilateral brain stimulation, while recalling disturbing memories. In addition, she offers some therapies that don’t require revisiting the traumatic events, such as “Seeking Safety,” which is about making positive choices.

Veterans who suffer from MST may be eligible for treatment through the VA even if they are otherwise ineligible for VA services, according to Weaver. It is not necessary to have a service-connected disability rating or to have reported the incident when it happened.

Norris praises the care she received from the VA in Maine as “phenomenal,” and urges victims to seek VA treatment, but she also says the VA system can be overwhelming. She recently became Maine coordinator of the Military Rape Crisis Center, a nonprofit outreach organization based in Cambridge and Washington, D.C., that provides free support and legal assistance to victims of MST.

Panayiota Bertzikis, who reported being raped while serving as a Seaman in the US Coast Guard, founded the center. She says that many victims have such painful experiences dealing with the military that they don’t feel comfortable turning to the VA for help. Similarly, many victimized while in active duty want to keep their diagnosis private so it does not affect their military career. The center and its website offer detailed information on how to navigate filing a compensation claim at the VA, challenging a diagnosis, and finding nonmilitary resources for crisis care.

At ProtectOurDefenders.com, founder and activist Nancy Parrish says that treatment for MST can be spotty, depending on the VA facility. She urges MST victims to demand copies of all medical records for treatment while on active duty. Because VA facilities can be intimidating, with staff not universally knowledgable about MST, she also suggests that anyone seeking treatment check out who the MST coordinator is for the facility beforehand. ProtectOurDefenders.com offers information along with guidelines for seeking counseling.

Dr. Laurie Leitch, author of those guidelines and cofounder of the Trauma Resource Institute in Santa Fe says that therapies such as prolonged exposure, which require patients to revisit the trauma, can be too disturbing for some victims. She offers what she considers a gentler treatment called the Trauma Resiliency Model . This approach teaches trauma victims a set of mind-body awareness skills to help them notice the pattern of things that trigger negative thoughts and feelings, and shift out of them.

Funded in part by Garry Trudeau, the Doonesbury comic creator who has been outspoken in his support of MST victims, Leitch developed a smartphone app that offers a mini­course in self-help skills to use to avert and reduce stress.

At the VA, Weaver agreed that mind-body approaches to MST symptoms can be useful. She says the most important thing for MST victims to know is that treatment is available. “I want them to know they are not alone in having long-lasting problems following trauma.” She adds: “Having psychological problems following MST does not mean that they are crazy or broken or beyond repair.”

Jan Brogan can be reached at janbroganbooks@gmail.com