THIS STORY HAS BEEN FORMATTED FOR EASY PRINTING
G Cover

IN A FAMILY WAY 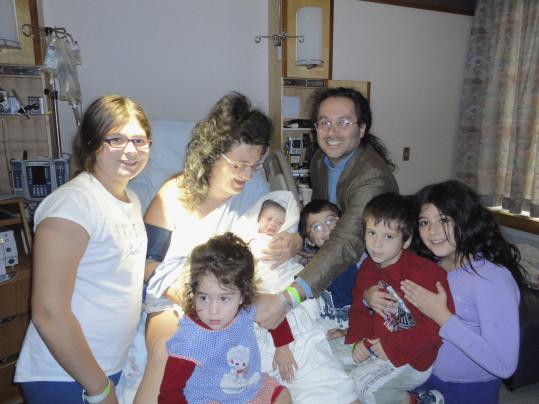 Michele and Serena Lanzetta were determined to have their five children, ages 2 to 13, in the delivery room for the birth of their baby last September at Brigham and Women’s Hospital. When they first mentioned their plan during a pre-delivery visit, a nurse said it was impossible: The limit was two observers.

But the Lanzettas knew the policy allowed for exceptions, so they called Barbara Wallace, the hospital’s director of Labor, Birth, and Recovery. “How am I going to make this happen?’’ Wallace recalls thinking. “Five children in there with their cuddle blankets?’’

Wallace met with the obstetrician, nursing staff, anesthesiologists, and neonatologists. They promised to respect the Lanzettas’ wishes as long as the family adhered to some basic guidelines: If everything looked normal as the baby emerged, the children could come close. If their mother bled heavily or experienced serious complications, they would need to leave.

During the birth, everyone in the family had an assignment: Luca, 4, and Anna, 2, shouted “push, push.’’ Paolo, 7, cut the umbilical cord. Laura, 9, gave the baby her first bath. The oldest, Clara, 13, helped mind her younger siblings during the 15-hour labor and delivery.

“We wanted the children to help welcome the baby into the world,’’ Michele Lanzetta said in an interview last week. “It’s a very important moment for the whole family.’’

Irene’s birth, on Sept. 18, went smoothly, and since then the Brigham has updated its information for families, welcoming siblings at birth. Likewise, a growing number of hospitals say they are fielding requests from families to have children present during delivery and relaxing policies to accommodate them.

The practice is not entirely new — siblings have become more common at births in the United States since the resurgence of midwives, who encourage family participation, in the 1980s. But their presence is not widespread, and it’s even rarer to have preschoolers in the delivery room.

A survey of 69 hospitals in the Southeastern United States, published in the American Journal of Maternal Child Nursing in 2009, found that just 22 percent allowed siblings to observe vaginal births. Little other data exists.

Though plenty of parents are still squeamish about the idea, obstetrical nurses speculate that debate in online chat rooms has fueled interest in the option. And hospitals competing for pregnant customers who want a homey, less medical childbirth experience are growing more flexible. Immigrants from cultures where the practice is customary also are having an impact.

The Lanzetta family, who are from Pisa, Italy, were living in Boston temporarily while Michele Lanzetta worked at MIT as a robotics engineer, when the family gathered for baby Irene’s arrival.

Joanna Kaufman, a nurse with the Institute for Patient- and Family-Centered Care, a nonprofit advocacy organization in Maryland, points out that until the 1970s, most hospitals made even spouses wait outside.

“They said the delivery room was too crowded and that it would increase the risk of infection. What if the husband fainted? Then we would have to tend to the men. Now it’s standard,’’ she said.

Still, Kaufman acknowledges that children are different. They do not have a sophisticated understanding of birth and might be frightened by seeing a parent in pain. This is the most common concern raised by mothers-to-be in online discussions, along with worries that they will become distracted and tense if their children are melting down or misbehaving.

In a small number of studies, researchers surveyed parents about the impact on siblings and found mixed results, Kaufman said. Some parents said young children were scared by the blood, while others believed the experience created a bond with the baby that made siblings less jealous.

This was one reason Rosemary Torres, 29, decided to invite her son Angel, 8, into the delivery room at the Brigham. Angel was accustomed to his parents’ undivided attention. Torres brought Angel a small gift to break the news of her pregnancy. The second-grader opened the T-shirt with the words “I’m finally going to be a big brother,’’ and silently ran up to his room.

Angel wanted time to prepare for the birth, so he and his mother watched a video at their home — “nothing graphic,’’ Torres said — and talked about what to expect in the delivery room. Several hours after the birth of his brother, Aiden, on March 8, Angel cradled the baby in his mother’s hospital room.

“I was a little nervous and a little jealous,’’ Angel said. “Because I didn’t know what I was going to see. But it was kind of nice because I didn’t have to wait outside.’’

Angel is a calm and quiet child and was able to stay in the delivery room for several hours without distracting his mother ­— and that is an important consideration, caregivers said.

“It depends on your child. You have to know your kid,’’ said Dr. Toni Golen, medical director of labor and delivery at Beth Israel Deaconess Medical Center. The hospital usually requires each child in the delivery room be assigned to one adult in case the child needs food or needs to leave.

At Emerson Hospital in Concord, Dr. Jeffrey Riley, chief of obstetrics and gynecology, said that he has seen “teenage daughters who were thrilled’’ watching the birth of a sibling. In other instances, “children were very confused about what was going on. They see their mother in distress and it’s concerning to them if they don’t understand it’s part of the birthing process.’’

Cristin Bower, 28, who delivered at Emerson this month, felt strongly that the benefits would outweigh the drawbacks. After her obstetrician initially told her the limit was two observers in the delivery room, nurses agreed to allow in her three children, ages 3, 5, and 7, Bower’s sister, and her sister’s 12- and 14-year-olds.

Bower had the children stand by her shoulders because she did not want them to see the graphic details and her husband, Daniel Bower, 29, a Marine based at Hanscom Air Force Base, cut the umbilical cord. The children were perfectly behaved, said nurse Peggy Kleimon.

At one point, Bower’s daughter, Korah, 5, “decided to duck around and take a peek,’’ Cristin Bower said. “She got more than she bargained for. She saw the baby coming out. She was just shocked. She asked if it hurt, and I said it does. She said she is going to adopt.’’

Liz Kowalczyk can be reached at
kowalczyk@globe.com.