THIS STORY HAS BEEN FORMATTED FOR EASY PRINTING
In Practice

Blurred boundaries between doctor and patient 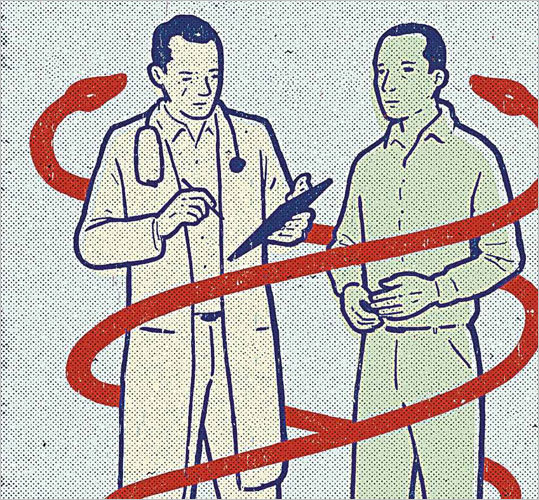 When Emma died, at 94, a small crowd gathered for her funeral. She’d never married or had children and wasn’t close to her extended family, but her warmth, honesty, and edgy wit had attracted many younger friends, including me.

Emma and I met frequently to gossip, talk about books and politics, and trade stories about our lives. She came to my house for dinner several times, and my husband and kids joined me at her 90th birthday party. When, at 92, Emma moved reluctantly into a nursing home, I brought her the bagels and lox she craved - rich, salty treats her doctor had long discouraged her from eating.

Here’s the funny part: I was that doctor.

For 15 years Emma was both my patient and my friend. Most of the time these two roles sat comfortably side by side. Occasionally they conflicted (see bagels and lox above). More often then not they were mutually reinforcing.

I suppose I can’t prove it, but I am convinced that her frequent trips to my office, during which we talked at least as much about presidential campaigns, skirt lengths, and bestsellers as about her arthritis and digestive difficulties, helped prevent Emma from being hospitalized as older people, particularly those who live alone, so often are.

When I first went into practice, I had rather firm notions of the proper boundaries between doctors and patients. I wore a long white coat, revealed little about my personal life, never called patients by their first names and felt insulted if they called me by mine. An older colleague found my rigidity amusing. Most of his patients called him Jim, and he played golf with many of them. “You’ll loosen up in time,’’ he predicted.

Looking back I think I feared that as a young female physician I wouldn’t be taken seriously unless I maintained an austere facade. My role models were those legendary physicians of the 19th century whose oil portraits had lined the walls of the hospital in which I did my medical training. Dr. James Jackson of Massachusetts General Hospital summed up their philosophy in his 1855 book “Letters to a Young Physician.’’ He advised that a doctor should maintain a calm and neutral attitude with patients, “abstain from all levity,’’ and, most important, “never exact attention to himself.’’

As my colleague Jim predicted, I found this standard nearly impossible to meet over time. After all, a doctor is not simply a repository of information but a human being with a personality, a sense of humor, and a point of view.

Even seemingly straightforward medical questions - “Should I try to have a child at 40?,’’ “Should I take a cholesterol-lowering drug?’’ - demand more than medical answers. Yes, I can offer statistics about rates of infertility or birth defects and data about the benefits and side effects of medications. But so often the real question patients are asking is: “What would you do if you were me?’’ It is, at least in part, a personal question that implies and nourishes a personal relationship - but how personal should that relationship be?

In my role as a primary care doctor, I ask patients about their families. In turn they may, quite naturally, ask me about mine. How did I deal with my kids going off to college? My parents’ aging and failing? A two-career marriage? Over the years I’ve found myself answering more and more openly, feeling that, ultimately, these questions mirror concerns my patients have about their own lives.

My father was an orthopedic surgeon, and I grew up among doctors whose professional and personal lives were more intertwined than most doctors’ are today. My parents’ entire social circle consisted of dad’s doctor colleagues and their wives (yes, all the doctors were men). My pediatrician came to our home to examine me when I was sick and often stayed for coffee. Our next-door neighbor practiced internal medicine from an office in his house. When his daughter and I ran in from playing in the yard and opened the refrigerator looking for a snack, we saw vials of insulin and penicillin lined up next to the chocolate milk.

In the generation since, I’ve noticed a paradox: As doctors’ personal lives have become more segregated from their work lives, the interaction between physicians and patients has become less distant. While the days of the home office, house call, and 24/7 solo practitioner are mostly past, my patients often view me as a partner in, rather than a director of, their medical care. They treat me more familiarly than my dad’s patients treated him.

To acknowledge this shift, there was a movement a few years ago in which doctors were encouraged to refer to patients as “clients.’’ This term, which psychotherapists, physical therapists, and other clinicians often use, is meant to imply a respectful, collaborative relationship in which the medical professional doesn’t hold disproportionate power.

But the term never caught on with physicians. Perhaps we didn’t want to relinquish that power. Or perhaps it’s because “client’’ connotes a party in a business transaction, and that doesn’t capture how we feel about our patients - or ourselves. And in at least one study, patients asked about the term “client’’ said they didn’t like it, either.

So if we’re not business associates, not oracle or supplicant, and not exactly friends, what is the proper relationship between a doctor and a patient?

That question remains open to interpretation.

A 1994 survey of several hundred American physicians found wide variation in attitudes about having lunch with, hugging, or even dating patients. In recent years there has been much published, pro and con, in medical journals about whether physicians should accept gifts or requests from patients to be “friends’’ on social networking sites.

In his quaint Victorian prose, Dr. James Jackson offered this guidance: “The patient is the central object in the sick-room, or should be so.’’ The old guy may have been on to something. Looking back on my relationship with Emma, who would have turned 100 this year, I realize that as mutually affectionate as our friendship was, her health and comfort were always its purpose.